With long-range shooting being the current rage, one often-overlooked item that is critical to success is proper scope mounting.

Scope mounting is a multi-faceted process, with all parts being critical to consistent hits on long-range bullseyes. One part of this is having the scope level to the gun. Crosshairs that are out of kilter in connection with the gun can move the point of impact between 100 yards to 200 yards. Imagine what happens with shots stretched out to 500 yards and beyond.

I have purchased package guns that included the scope, and the leveling has been off right from the factory.

Rifle cant refers to not holding the rifle level, while scope cant is when the scope is not level in relation to the rifle.

Personally, I usually install a scope in the basement and have a limited field of view. Many times, I have then taken the gun to the range and noticed the level was askew. A lesson from this is to take your tools to the range, because what you see at the range at 100 yards might be different from in the basement.

If the reticle is not level to the scope housing, there is no way to repair it, as it is a manufacturing issue. Many scopes come with great warranties, and this is certainly a reason to replace it.

The most common method of ensuring the scope is level to the gun is by eye, using a known horizontal or vertical surface. However, this method is the most prone to error, as there is no way to guarantee the gun is level to start.

The simplest scope leveling method uses household materials: By fastening a string with a weight to your target, gravity will ensure there is a perfectly vertical line to use for reference. Black string, or decoy cord, works great.

While looking through the scope, turn it until the vertical crosshair aligns with the thread. Take care not to move the gun and secure the scope rings.

Another possibility is to perform this task in the basement and hang a plumb line from the rafters. Again, make sure the gun is level when starting. 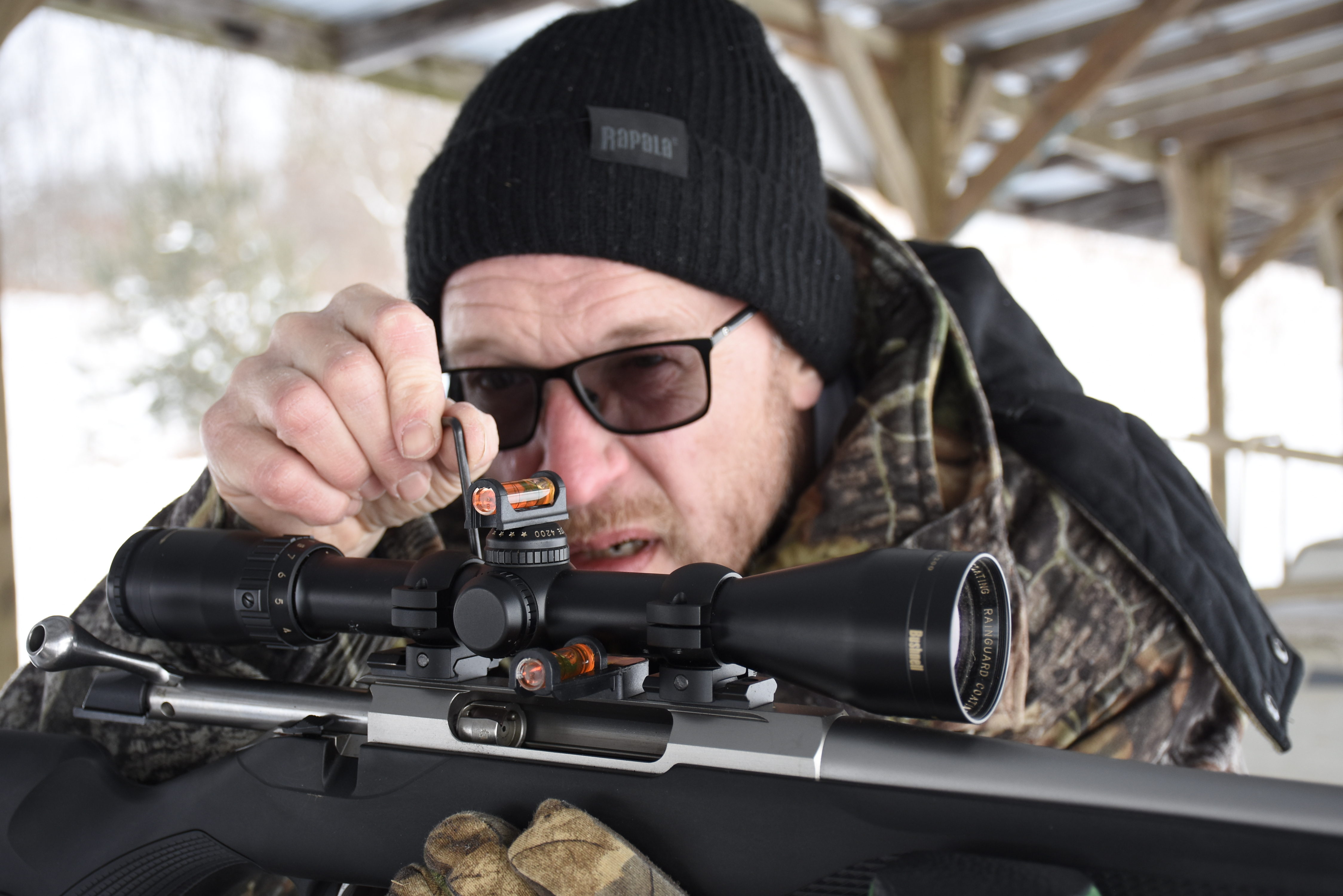 There are many scope-leveling devices on the market today, ranging in cost from under $10 to more than $100.

The Segway Reticle Leveler was the first device to address scope canting 30 years ago. Michael Palmer, the uncle of current owner James Palmer, invented it.

“The possibility of having a scope canted is very real and most people don’t realize it,” Palmer said.

He said people loved his uncle’s device because it was simple, but when his uncle died, manufacturing of the device ceased.

“I was interested in what he was doing,” Palmer recalled. “I took all his old inventory, put it on eBay and Amazon and it was gone in two weeks. I redeveloped, incorporated, made a couple of changes and put it back on the market.”

Using the Reticle Leveler is simple. It has a rod that is set at a flat place on the base and then secured with an elastic band around the bottom of the rifle. A level above the rod certifies the gun is level. Then leveling the scope is a simple matter of lining up the lines on the Reticle Leveler with the crosshairs.

Wheeler Engineering’s Level-Level-Level is another manufactured leveling device. It uses a small level that magnetically attaches to a flat surface on the scope base along with another level that is set on top of the scope adjustment covers. After the gun is leveled and secured, it’s simply a matter of turning the scope until it is level.

One thing to keep in mind with any leveling device is to keep checking the scope hasn’t moved as the mount screws are tightened. Any movement will require readjustment.

With a shotgun or rifle, it’s important to use the lowest mounts possible.

“Mounting optics exceedingly high is one of the most common problems we see,” said Jake Edson, public relations manager for Bushnell. “Not only does it force the line of sight further out of alignment with the bore, it also promotes improper shooting form ... a major reason why folks miss turkeys.”

Edson emphasized this is especially important with a turkey gun and warned, if using a red dot, to avoid the high-rise bases often shipped for AR-type rifles.

Putting a dab of Loctite on the screws holding both the bases and scope is important. The amount of recoil from turkey loads or many magnums is enough to shake your teeth, not to mention small screws. Use blue Loctite to allow loosening the screws in the future.

Setting the proper eye relief for the individual shooter is an important consideration.

"If you're looking for a truly ideal mount, you have to make sure you're accounting for a shooter's body type,” said Michael Baccellieri of Leupold Optics Academy. “The optic really needs to be mounted while the shooter is in the prone position. Set the optic to max magnification and push it as far toward the muzzle end of the rifle as possible without creating vignetting or scope shadow. Every body type is different, and for a perfect fit, you need to account for that.”

Mike O’Donnell, senior project engineer with Burris, warned of issues with scope alignment. This is caused when the base holes aren’t perfectly aligned.

“If you have factory holes, you should be safe,” he said. “If it was done aftermarket, it’s possible it was not done right. Then, if you put a scope on it, you’re actually binding the scope.”

Burris’ Signature rings incorporate a plastic insert in the ring that relieves some of the stress.

With a few adjustments, shooting straight is a simple fix that can result in fewer headaches down the road.