Should You Carry a Sidearm While Hunting?

To hunt with a sidearm or to hunt without one? Some could say there are pros and cons to both. In some states, it is illegal to carry a sidearm during some seasons without a concealed carry license, and in other places, like Alaska or other areas inhabited by large predators, it would almost be foolish to not be prepared for the rare, yet possible, encounter where a sidearm could save your life.

“In some states, during certain hunting seasons, it is not legal to carry a handgun, such as during archery and muzzleloader seasons in South Carolina,” said Matt Lindler, NWTF director of conservation communications and former pistol and concealed carry permit instructor. “The exception being if you have your concealed carry license. Those considering carrying a modern handgun while hunting should make sure to check all of their hunting regulations and state laws. Also be aware of regulations restricting handguns on specific hunting properties, such as certain U.S. Army Corps of Engineers lands.”

“If you’re hunting in large predator country, having a handgun for a close-quarters encounter is a must,” Lindler said. “While your rifle or shotgun should be at the ready, they’re not easily aimed or maneuvered in thick cover or when you’re surprised up close. Turkey hunters using shotguns should be loaded with birdshot, which isn’t as effective at stopping a determined threat as a heavier bullet is.”

While situations requiring you to use a sidearm are extremely rare, there are instances that extend beyond the encounter of an aggressive large predator.

“Another threat people don't often consider is stumbling into an illegal situation, such as a methamphetamine lab or marijuana plot,” Lindler said. “You could accidentally find yourself in a sketchy situation in seldom-used areas of private and public forests. You do not know how dangerous a situation can be, and if you do find yourself in one of these situations, back out as quickly as you can.”

While the personal protection pros of carrying a sidearm while hunting outweigh the cons, there are, however, some things you should remember. 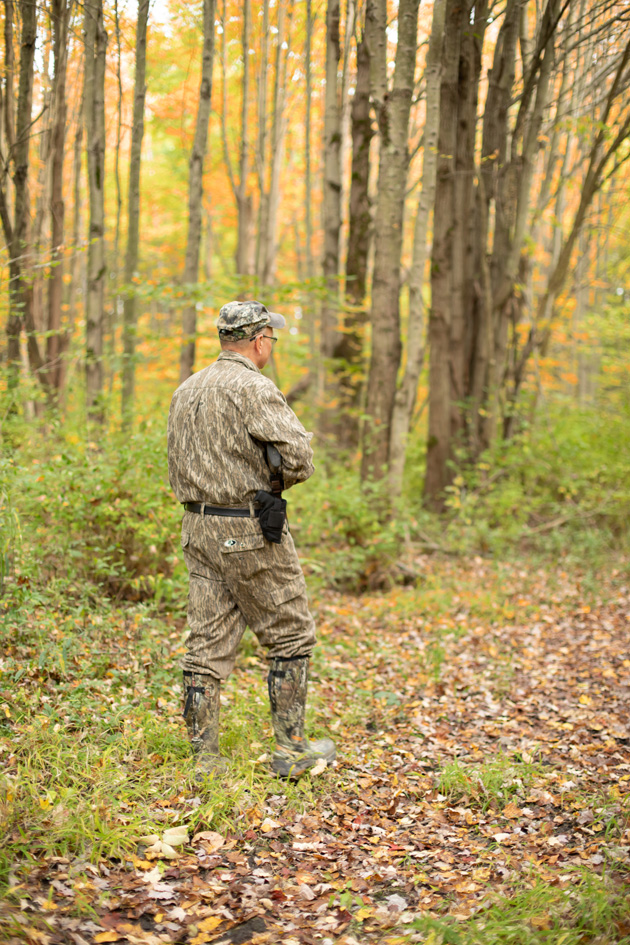 “There is one major negative everyone carrying a concealed firearm should be aware of,” Lindler said. “You can become complacent and not as aware of your environment as you should, especially in areas where large predators roam.

“Additionally, you must be vigilant in researching the laws and regulations to ensure you remain legal. Plus, a sidearm adds bulk and can be uncomfortable while in a climbing harness or in some tree stands during deer season.”

Carrying a sidearm while hunting is a personal choice, but it can enhance your personal safety in the woods. While it may take extra effort on your part and may add weight or bulk, having a sidearm could save your life.