If I spit my hardest on a blustery day and with the wind at my back, it will launch approximately 10 yards. What in the world does that have to do with turkey hunting? Well, if I can spit 10 yards somewhat easily, then bow-killing a turkey at 10-15 yards should be equally as easy. In other words, why setup for a 20-yard shot if you can setup for a simple 10-yarder? 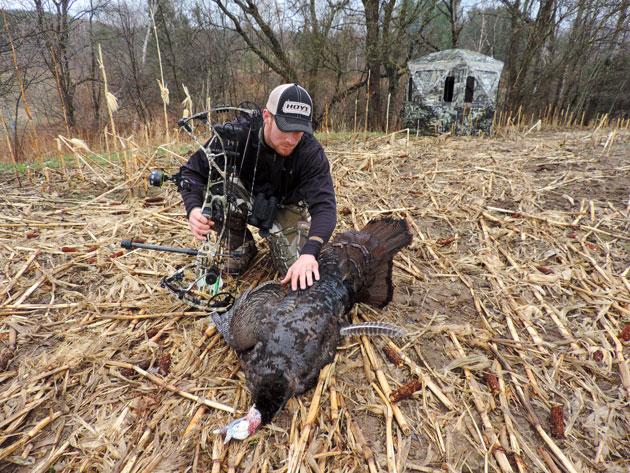 While I’m a good shot and have bow-killed gobblers at distances well beyond 20 yards, I prefer in-my-lap shots because I believe it’s my ethical responsibility to orchestrate the highest-percentage opportunities possible. My goal is to take every tom cleanly. Turkeys have small kill zones, and when they’re walking or spinning, that small kill zone is a fleeting, easy-to-miss target. Thus, the closer the bird is, the easier the target becomes, and the more likely I’ll make a quick, humane kill.

Obviously, pulling toms in ultra-close is easier said than done. It requires a specific approach and setup. Let’s discuss several tips so that you can arrow your next tom at spitting distance with the benefit of an easy recovery.

It’s All About Decoys

When shotgun hunting for turkeys, decoys aren’t always necessary. Unless you have a tom patterned to a 20-yard radius, good luck bow-killing one without a decoy. It’s not easy. In fact, if I had to choose between calls or decoys, I’d take decoys. Calls can bring birds looking, but decoys provide the visual allure to draw them within that 10 - to 15-yard barrier and keep them there while you aim and shoot.

Realism matters. I’m partial to Dave Smith DSD Jake and Feeding Hen decoys, and no, I’m not being paid to write that. I’m writing it because I’ve used them for nearly 10 seasons now, and they work 99 percent better than previous decoys I’ve used. They offer impeccable realism that still makes me look twice. Their detailed shapes and paintjobs reflect that of a real turkey. I can’t count how many gobblers from Florida to South Dakota have beat up my DSD Jake. For a bowhunter, that epitomizes the purpose of decoys.

Now, there are other decoy brands with similar realism, but my point is not to skimp. I used cheap decoys extensively before switching to Dave Smiths, and I killed only a few gobblers at point-blank range over them. Others I killed simply wandered too close from sheer curiosity. My results were extremely subpar.

Today, I look at decoys much differently. When bowhunting, I’m not merely trying to pique a tom’s curiosity. I’m trying to trigger a fight response where he cares about one thing: beating up the jake intruder that’s courting one of his hens. When a bird fully commits to the jake decoy, you can get away with more movement and have more time to make the shot.

Although I prefer to hunt without a blind, I assume that most folks reading this piece will be hunting from a ground blind, so I’ll target the details accordingly.

First, I scarcely hunt in the timber. I prefer field setups with expansive visibility and no brush to deflect my arrows. I generally set my blind in the wide open, and I’ve killed most of my birds this way. Most importantly, I place my decoys on the highest point in the field where they’re visible from as many directions as possible. Turkeys respond well to decoys uphill from their location. In fact, of the dozens of toms I’ve nailed, I don’t recall ever luring one downhill. I set them 9-12 yards away, which makes for an easy top-pin shot.

As a side note, I used to place decoys even closer, say, 5 yards. I quit when I realized that my arrow trajectory doesn’t correlate with my top pin at that range, resulting in low hits. For my bow, using my 40-yard pin yields a dead-on hit at 4-5 yards. I’d rather use my top pin and shoot birds at 10 yards because it’s less confusing. If you choose to place your decoys at 5 yards, then practice at that distance so you know where your bow shoots and how to aim.

Back to decoys. I usually use one jake and one hen decoy, but when toms are incredibly henned-up, I’ll use only one or two hen decoys, my goal being to attract the hens. I’ve had real hens become unbelievably territorial toward my DSD hens, and when they come to confront my decoys, the toms usually follow.

The decoys you choose and how you position them will impact the type of shot opportunity you’ll get. Choose realistic ones and place them in the right place at 9-12 yards so that when a tom commits, he’ll offer a spitting-distance opportunity.

When gobblers come in hot to confront your jake decoy, especially if they stomp it and beat it with their wings, it triggers a false sense of urgency to shoot immediately. When hunting big game, I believe in taking the first ethical shot opportunity I’m presented with. When turkeys are standing amongst my decoys, I don’t. Here’s why.

Once when I took my wife turkey hunting, we had a tom come right to our jake decoy and pause next to it facing us head-on. I said, “Aim between his neck and beard and shoot!” When her release triggered, the tom simultaneously lunged at our jake decoy. Her arrow flew perfectly, but because of his ninja antics, it merely shaved off feathers. I’ve had similar results when rushing my own shots.

When gobblers are locked onto decoys, you typically have all the time you need to aim and make the shot. Let them beat up the decoy and then calm down a bit. Be darn sure that the tom is going to stay put when you shoot, or you could miss or wound the bird, even at chip-shot distances.

This is tough to do, but just slow down and talk yourself through the encounter as it unfolds. Don’t let the excitement of a tom pummeling your decoy cause poor judgement. Rushing, more often than not, results in floating feathers and a miss or perplexing tracking job.

After hearing the tom gobble, I positioned my Primos SurroundView 270 blind on the highest point in the area, then tiptoed 12 yards out and planted my two decoys into the fertile Wisconsin soil. I quickly scuttled back to my blind and organized my equipment inside.

When ready, I pitched some soft tree yelps, which the tom answered promptly as light rain fell. Then, I sat silent. I wanted him to come looking and see my decoys. It didn’t quite work that way. There were actually three toms, and all were interested in a few hens that worked their way into the corn-stubble field. I called and was answered multiple times, but the birds showed little commitment.

Suddenly, one tom broke off and was heading for the timber when he spied my decoys. He shifted his course and walked right along the field line before approaching my plastics. He had a full fan and limb-hanger spurs but no beard. I didn’t think twice. I drew just before he reached my decoys, and he began beating my jake decoy quite vigorously. I remember telling myself to keep holding and not rush. When I knew he wasn’t going to leap, I aimed small and increased pressure on my release trigger.

Because I orchestrated an easy shot with my blind and decoy setup, I was able to deliver a lethal arrow and take the gobbler cleanly. More importantly, slowing down mentally and taking my time yielded a perfect shot and 10-yard recovery. This should be every turkey bowhunter’s end goal, and it’s achievable if you follow the simple steps I’ve outlined.