Spooky Stories from the Turkey Woods 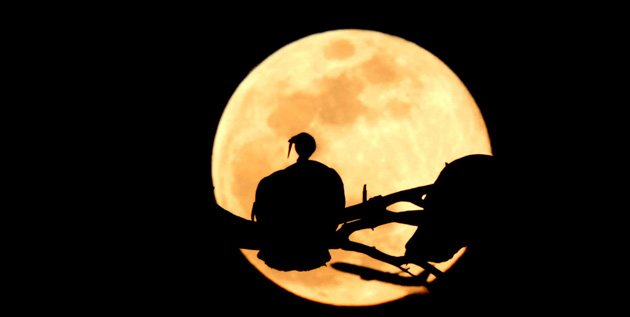 Dark shapes. Distant screams. Twilight in the turkey woods can be a frightening place. We’ve put together some of the spookiest stories from NWTF members to celebrate this most ghoulish day. One member is pursued by a rustling in the bushes, which turns out to be a nasty surprise. Others are encircled by nighttime beasts and must find a way to escape. Still others are haunted by shadowy figures in the early morning hours. Read their stories here…if you dare!

I had parked in the pitch black on my place to set out for a turkey hunt on my own. My mind always imagines scary things out in the woods coming to get me when I’m alone and it’s dark. I had this horrible feeling as soon as I walked a little ways away from my car. I could just feel a presence around me. I turned around and saw a huge figure move just a few feet from me. I raised my shotgun and was on the trigger, almost about to shoot when I made out the shape of my neighbor’s donkey who is notorious for breaking out of his fence.

A Rustling in the Bushes

I was walking down an old logging road to my morning spot, shotgun strap over one shoulder and my hen decoy in my other hand. It was about 5am and pitch black, the only light coming from my head lamp. As I’m making my way down the road I hear some rustling in the leaves. No big deal, it’s not unusual to walk up on deer, raccoons, ect. in the early morning hours. Except usually, those animals run away after being snuck up on in the dark. Whatever I walked up was not running away. It just kept rustling around in the brush next to the road. I stop walking and shine my light at where the noise is coming from, expecting to see an armadillo or something like that. Wrong.

As soon as my light hits the brush a full grown bobcat jumps out into the road in front of me, hunched down like it’s about to launch itself at me. I don’t know what move I did, but I swear before my decoy hit the ground I had my gun shouldered and pointed at the cat. The bobcat ran off down the hillside once I made my move, but only for a brief moment. It immediately came back to the spot I first heard it rustling in the brush.

I slid my finger back and clicked the safety off, thinking it’s about to go down on the old logging road. But I didn’t want to have to kill it if I didn’t have to, so I started hollering and raising hell, surely waking every turkey within a five mile radius. That worked, and the bobcat finally ran off away from me, but it ran off in the direction where I was going to sit at sunrise. I figured I’d just let the bobcat have that area today and I went back the way I came, heart still beating out of my chest.

About 3 years ago I was all set up against my tree and getting settled in when all of a sudden, I heard what sounded like a woman screaming in the woods about 30 to 40 yards from me. Had a really guttural sound to the voice. Then I heard crashing through the woods as whatever it was ran off. I nearly crapped myself and decided to flip the safety off my shotgun. Nothing else happened the rest of the day. Certain no turkeys at that point. My best guess was that it was a fox. Everything sounds louder and bigger when it's 5a.m. and pitch black.

A Broken Leg and Melted Change

Got caught in an early morning lightning storm on the SD prairie. Had to hurry back to the truck as I had a mile of soft dirt field to cross in pouring rain or I’d never get out! The rancher had just told me the night before about him getting hit by lightning years ago and it broke his leg, blew his boots off and melted the change in his pocket! It was a long-haul getting back to the truck but I made it soaked and frightened from the lightning. My hip hurt for two months afterwards and the area ended up with washed out roads and 6 inches of rain.

While working a longbeard in a field, heard a stick break behind me to the left. Thought, here comes a 2-year-old trying to sneak in and steal this hen. After a minute had a hair stand up on my neck feeling. Peeked behind me and looked down the barrel of a 12-gauge pointed at my head. Said don't shoot and the gun stayed pointed at me. Hollered again and the kid lowered the gun, looked shocked and ran back in the woods. Sat there for a few and decided enough for today.

On one early morning turkey hunt I had an owl fly right over top of me and dropped a half-eaten bull frog in my lap as I sat against the tree.

Was hunting alone and sneaking into a new spot. I parked off the gravel in the deep woods, about 500yds from my planned spot... got out and decided to change to a lighter pants (you never know in Texas)...I got this eerie feeling .....something was watching me....I’m standing there pantless... I ended up climbing in the cab and changing in the truck.

I felt a lot better once I had my gun in my hands and proceeded to my spot...about 45 min later I'm set up and set to doze off for dawn. A coyote howls off in the distance, then another, and another, then right behind me, to left, right, sounded like there was 100 of them all around me and very close......needless to say I didn't catch any sleep that morning. And I'm pretty sure that’s why the turkeys didn't gobble either.

Happy Halloween! We hope those stories gave you some chills and that you’ll only find treats, no tricks, in the woods this fall!