I am not much of a writer — more of a numbers guy — but the experience I had on opening day of the central Florida turkey season was so exceptional that it forced me to write down my story to share with others.

The morning of March 20 in Osceola County, Florida, on my hunting lease near Yeehaw Junction, Florida, was an opening morning dream for turkey hunters: brisk temperatures and low fog. I knew the birds would be gobbling. I set up in an oak head waiting for the first gobble and soon heard one to the south. As I waited, I heard other birds start firing off about 400 yards to the west, and I decided to pursue them.

As I crept to the edge of a hammock near the group of gobblers, I started to map out a game plan. The birds were roosted north of me on the other side of my lease property line. About 75 yards from the north fence line of my lease, two jakes were already on the ground 30 or so yards from me. I immediately got low, and when they moved out of sight, I was able to set up my decoys and start calling to the two gobblers that were still gobbling. After a few minutes, I saw the jakes, but they were on alert and walking north, straight to the fence line in the direction of the other gobblers, which appeared in full strut about 100 yards away. The jakes led them away, and I thought the hunt was over.

I called sporadically for about an hour until the birds gobbled a few hundred yards to the west. I decided to try and get around them, but as soon as I got up to gather my decoys, I noticed two birds 75 yards away, right on the other side of the fence line. At a closer look, they were decoys, and the hunter had a stake blind set up about 20 yards from them. I had been set up next to this hunter the entire time. I whistled to try to get his attention, but he did not hear me. I decided to pack up and try again the next morning. As I was about to walk back to my UTV, I saw the hunter get up and start packing up his blind. I whistled to him again, and he heard me. I waved and decided to go talk to him and make my apologies. I set my decoy vest and gun down so as not to walk up to him with a firearm.

We met at the fence line. His name was Kerry, and he was an older gentleman from Pennsylvania that wintered in Florida and was a member of the lease to the north. I apologized to him and told him that I had no idea he was there, otherwise I wouldn’t have set up so close.

I never heard him call once, so I asked him about that, and he said, “I heard you calling, and it sounded good enough for the both of us.”

We laughed, and I told him he could have the spot free and clear tomorrow morning. As we were talking, I glanced down the fence line that had been disced for controlled burns in the past, and there was a gobbler, 150 yards away making his way to us.

I immediately kneeled, while Kerry lay completely flat on the ground. Remember, I did not have my gun. It was resting on my decoys and vest 75 yards away. Kerry asked what side of the fence the bird was on, and I said it was on my side.

In a great display of sportsmanship, Kerry handed me his shotgun through the fence. I knelt in the grass with Kerry’s shotgun in hand. There was quite a bit of grass in front, so it limited my visibility, but I could still see the gobbler. He was 15 yards away, and I raised Kerry’s shotgun and looked down the barrel, seconds away from pulling the trigger when the gobbler ducked his head and walked under the fence onto Kerry’s property.

Kerry was still on the ground facing away from the bird, looking at me in anticipation of a shot. I looked at him and whispered, “He is on your side now.” The gobbler slowly walked away with his head up looking at us, then Kerry’s decoy, and then back at us.

Once the bird was about 30 yards away, I was able to slide Kerry’s gun back to the fence where he had to reach as far as he could just to grab it. Once he had the gun, he slowly rolled over and took aim at the gobbler. 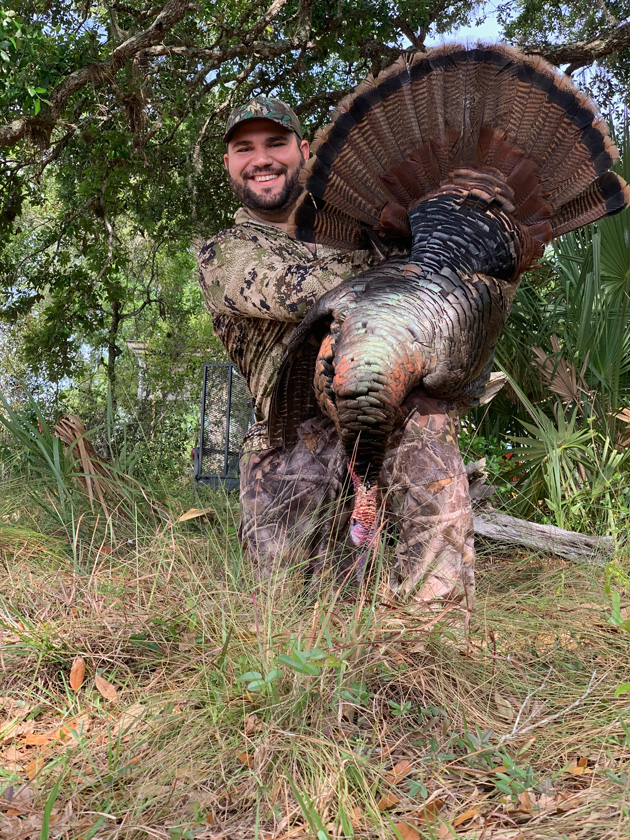 I noticed Kerry’s blind was in the grass directly between him and the bird. He had to crawl a foot to his right, but, by then, the turkey was 35 yards away and becoming suspicious. Kerry pulled the trigger and the turkey flopped. We high-fived over the fence, and I congratulated him on the harvest.

This memory will always be a reminder that turkey hunters have a common respect and sense of sportsmanship for each other and the hunt. Kerry was kind enough to pass his gun to me knowing I did not have mine, and I showed him the same respect to pass it back. I may not know Kerry on a personal level, but I’ll always think of him as one of the men that taught me there is much more to the hunt than just harvesting an animal.