The science of spring turkey movements can be a study in unpredictability.

“So, where are the birds you are tracking?” – Anonymous Turkey Hunter

One of the best parts about being a wild turkey biologist is interacting with turkey hunters. Each spring when we are tracking and monitoring our research birds, we commonly run across hunters out scouting and preparing their minds and souls for matching wits with a wily gobbler. Interestingly, when hunters and biologists interact during the early days of spring, scientific understanding is our mutual goal.

We are both trying to understand wild turkey behavior, albeit for slightly different reasons. During spring, wild turkeys transition from the slow moving, gregarious mixed flocks of winter and start to disperse as reproductive activity ramps up. That movement of wild turkeys, both male and female, during the spring transition period represents one of the most active stages of the bird’s life. 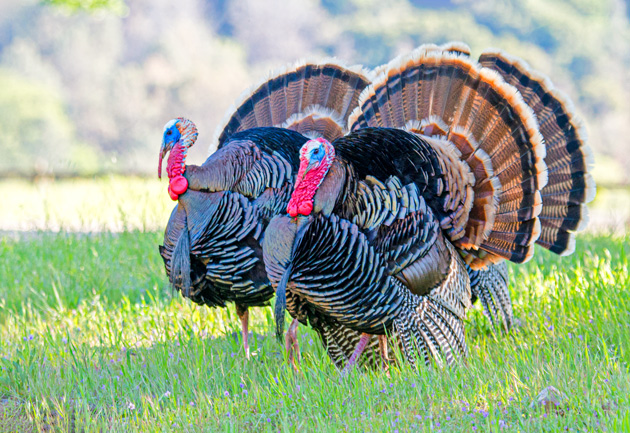 One thing is certain and that is turkeys are always on the move. Some research estimates that male wild turkeys move about 3,000 meters every day during spring. Hunters often think that hunting pressure causes turkeys to move off, but most of our GPS data indicate that hunting activity really does not cause birds to high-tail it out of their local range.

However, we realize no two turkeys are the same. For instance, one bird I know of moved fewer than 500 meters total for several days, then moved 9,000 meters one day before settling in and moving about 500 meters every day afterward. We have tracked a lot of turkeys, though, who faithfully follow the same route day-in and day-out, never leaving the same 1,000 acres over the course of an entire year.

Females tend to move about the same distance as males in spring, until they begin incubating nests. Then, they move only about 100 meters a day, usually to forage away from the nest.

The science on what drives daily turkey movements is a work in progress. Although, we do know two factors drive how a turkey moves during the day: finding food and avoiding predation. The main questions on the horizon are how much food and how much predation risk is required to make a turkey change direction.

LEAVING ON A FREIGHT TRAIN

One of the strangest things we deal with is when we track a turkey to the same general area every day for weeks on end, then, one day, “poof,” it’s gone. There is nothing that costs a turkey researcher more time than searching for dispersing turkeys. Dispersal is commonly defined as the movement of individual birds away from the area they were born to a different location.

The long history of radio-telemetry research suggests that dispersal is fairly common by wild turkeys of all age and sex classes. Often, though, juveniles are the ones that leave an area. As research has shown, most flocks of adult females have reasonably consistent annual ranges when they are not nesting. For juvenile males, it makes sense to leave your birth area. After all, your mom wants you out of the way, your dad is probably one of the dominant gobblers and all the females may be related to you.

We typically see fewer juvenile females disperse from their birth area. They commonly set up shop on the periphery of the female flocks associated with their mothers. However, when juvenile females disperse, boy do they go! Oftentimes, we see juvenile females move upwards of 15-20 miles away from their natal area. What is weird is that there does not seem to be a definitive reason as to why they choose a particular direction or distance. As best we can tell, they just up and leave, often going by themselves.

Early in my career, I was more willing to let loose with my thoughts on where the turkeys were at and where they were going. But, one day a good friend and I were hunting deer in what we thought was a can’t miss spot, until we saw deer moving off to the west side of us. He looked over at me and calmly said, “Well, sometimes they go east and sometimes they go west.” I think we can assume the same for wild turkeys.