Looking for a way to practice your wing shooting but don’t have time to shoot 100 targets on a sporting clays range? The game of 5-stand might be a solution that will allow regular practice not only for those with tight schedules, but also for those searching for a different clays game.

Simply explained, 5-stand is like sporting clays shot on a trap field. It consists of targets thrown from a variety of machines, including rabbit targets, to simulate wild game situations. While this sounds like sporting clays, 5-stand is different because it takes place in one location and shooters rotate through five different positions as if they are shooting trap. Shooting cages, or stations, like used in sporting clays, are put on a trap field or other static location.

For instance, one course I shot starts with the first target thrown being a rabbit. Next was a report, or following, pair — where the second target is launched when the trigger is pulled on the first — thrown from a tower behind the shooting range. The final targets were a true pair (both thrown at the same time) from a thrower to the right side of the range and out front. These targets were thrown toward the shooter and simulated incoming ducks. A round is 25 targets.

As the shooter rotates through the five different positions, the angle of each shot changes. 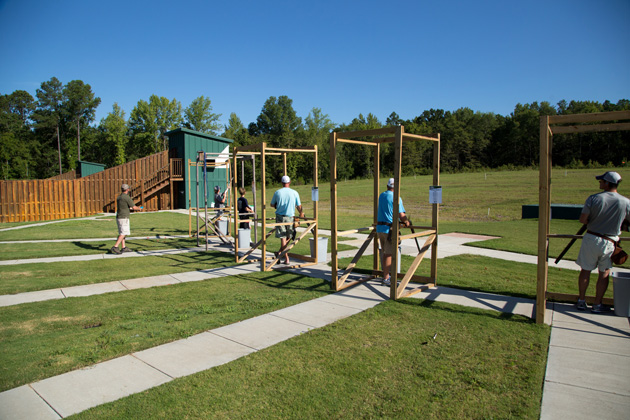 The National Sporting Clays Association, which oversees competitive rules for 5-stand and sporting clays, allows the shooter to start either with the gun mounted, as in trap or skeet, or unmounted. Beginning the shot unmounted is good practice for wing shooting.

THE TIME AND MONEY ADVANTAGE

Sporting clays is an ideal way to prep for an upcoming season. It’s also developed into a challenging competitive sport in its own right. But, with most courses being 100 birds, usually it takes two or three hours to complete a sporting clays round; that’s a morning or afternoon with travel time to the club.

I have found shooting 5-stand was quick. Actually, it’s faster than shooting a round of trap because multiple targets are shot instead of singles at each station. There are fewer stations than skeet, so it is also quicker.

If you are a shooter who wants to practice weekly, shooting a couple of rounds of 5-stand is a much smaller time commitment than sporting clays. If only shooting a couple of boxes, it’s also easier on the pocketbook. By the time you shoot four boxes on a round of sporting clays, paying $20 to $30 for the targets, it’s a $50 investment. At $5 for a round of 5-stand (my local price), this is just $15 to $20 for two rounds.

The reality is, many people are pressed for both time and money, so this is the perfect discipline to prepare them for hunting season.

5-stand was born from sporting clays when the latter sport was starting to gain popularity in the early 1990s. One of the initial problems was there weren’t a lot of sporting clay courses in the early days. NSCA addressed this deficit with several trucks equipped with target throwers, shooting cages and generators. Winchester, Remington, the NRA and Texas Parks and Wildlife sponsored the trucks.

“Some of the clubs they went to didn't have space for a permanent, large-scale course, so the 5-stand setup allowed them to simulate sporting clays in a smaller space, often overlaying skeet and trap fields,” said Sherry Kerr, director of communications for NSCA/NSSA. “Some clubs also used the 5-stand setups on larger areas to create a temporary sporting clays course. Once clubs were widespread around the country and we no longer needed the traveling courses, NSCA 5-stand became a fixture at many clubs and the events part of tournaments.”

Derrick Mein was the M-AA 5-stand winner in the NSCA championships. He is a member of the USA Shooting National Shotgun Team and has wins in sporting clays, trap, skeet, international trap and international skeet.

“To me, 5-stand gives you a larger variety of targets in a smaller setting,” he said. “If you only have time for a quick 10- to 15-minute practice, 5-stand is good, whereas, with sporting clays, you are looking at least an hour or more.”

Mein rated 5-stand in the middle of the difficulty scale in the clay disciplines. He said one drawback for beginners is it can be confusing locating where targets originate, as there isn’t a standard.

Mein likes to call for the target with his gun close to his shoulder, but not mounted.

Many shooters use 12 gauge, but there is no reason a 20 gauge couldn’t be used. In fact, there are often sub-gauge events in competitions. Mein prefers either improved cylinder or modified choke for 5-stand.

AN ALTERNATIVE FOR GUN CLUBS

The beauty of 5-stand is the existing trap field and throwers can be engaged to present an alternative shooting discipline — one that better simulates hunting conditions. After the initial setup of the additional machines, club members can literally take the cages off their fields and be back to a regulation skeet or trap range in a matter of minutes. 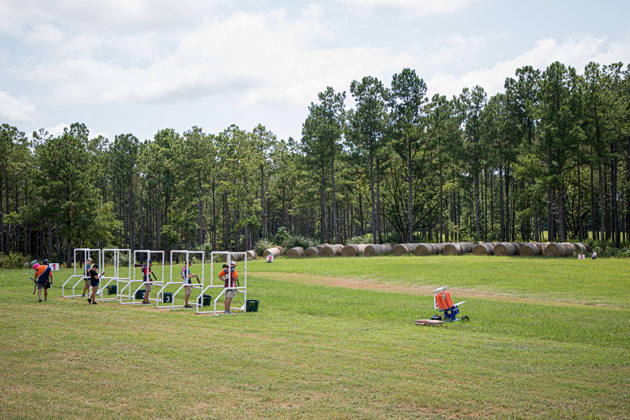 Unfortunately, only one of the clubs in my area has taken that initiative so far.

Competitive shoots for 5-stand are regulated through NSCA. Often these shoots are part of a sporting clays event, but some are held as stand-alone events.

The rules regulate scoring and make suggestions on how to position clay throwers, but target mix is left to the organizers.

“Keep in mind that these recommendations are for registered events, and clubs having non-registered events may set up their targets however they wish to accommodate their shooters,” Kerr said. “For introducing new shooters to clay target shooting, for a corporate event, etc., they might set up close, easy, straightforward targets, or for a club championship, they might set them harder. That's part of the beauty of 5-stand — target setters can do what they wish and accommodate their shooters.”

NCSA has two events at its national championship. One, M-AA Class, is for higher-class shooters and has targets that are more difficult. The other class is for the remainder of the classes. Classes are set up with a system similar to other clay shooting disciplines.

Once a shooter gets used to a course, I found 5-stand was easier than sporting clays. It presents better practice for hunting situations and is a lot of fun. If you’re struggling with a particular crossing shot or another angle, you can also shoot that target multiple times (while skipping the remaining shot options) to become more proficient. Give it a try, and become a better shotgun shooter.