When we think back on that first Thanksgiving in 1621, we are reminded of all the quintessential elements that still ring clear today — New England, turkeys, delicious food and beverages, celebration with loved ones and giving thanks. In honor of the 400th Thanksgiving this year, Tamworth Distilling in Tamworth, New Hampshire, is combining the characteristics that make Thanksgiving so special to create a one-of-a-kind Thanksgiving-flavored whiskey — and yes, that includes turkey. Not to mention, the distillery is earmarking funds raised through its Friendsgiving Raffle for the NWTF New Hampshire State Chapter.

Paying homage to the first Thanksgiving 400 years ago, Tamworth Distilling’s “Bird of Courage,” named after Ben Franklin’s moniker for the wild turkey, is utilizing ingredients that were present at the first Thanksgiving, including flint corn, chestnuts, apples, cranberries, kabocha squash, celery, parsley and sage, all locally sourced in New England.

“The owner of the distillery really likes to push the envelope with the ingredients we use,” said Matt Power, master distiller at Tamworth Distilling. “So we are always thinking of new things to try.”

And push the envelope they do; Tamworth Distilling has released whiskeys containing corpse flower, smoked venison and, even more unconventional, their Eau de Musc whiskey, which features an old-world flavoring technique that uses the oil extract from the castor gland of the North American beaver.

“We sort of developed this wild theme in some of our whiskeys, and the Bird of Courage is our most recent iteration,” Power said. “With the 400th Thanksgiving on the horizon, it was just another opportunity to experiment and celebrate all the flavors of Thanksgiving.” 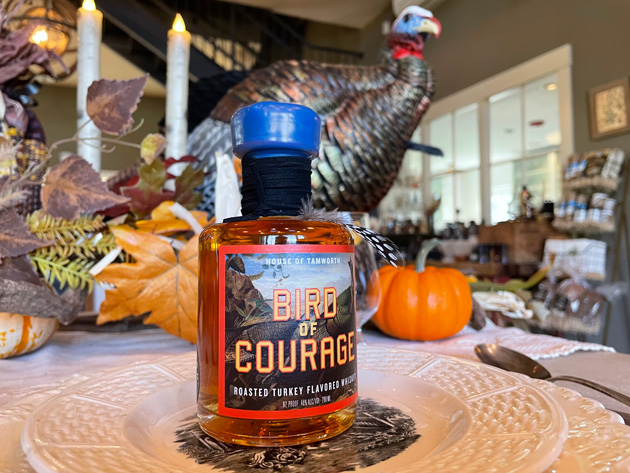 Each ingredient was cooked as it would be for a Thanksgiving feast: the turkey roasted and basted, the herbs picked fresh and sides cooked to perfection. These ingredients were distilled at peak flavor out of the oven and mixed with a 5-year-old bottled-in-bond whiskey; the result is a complex flavor reminiscent of the Thanksgiving meal we all know and love and sold with a name Benjamin Franklin would approve.

Just as they did with their Eau de Musc beaver whiskey, Tamworth Distilling is paying it forward by designating funds to conservation efforts in New Hampshire.

While the turkeys used in Bird of Courage were sourced at a local farm near the distillery, the wild turkeys in New Hampshire should be especially thankful this year, as Tamworth Distilling is donating 50% of its Friendsgiving Raffle proceeds to the NWTF state chapter.

The winner of the raffle will receive a catered Thanksgiving-style feast that serves up to 10 people, along with a complementary bottle of Bird of Courage.

“This is such a great way to bridge the lifestyle with our conservation efforts,” said Carter Heath, NWTF regional director in New England. “We just finished up a stewardship agreement on the White Mountain National Forest that will greatly benefit wild turkey habitat right down the road from where this unique whiskey was created. Funds raised through Tamworth’s Friendsgiving Raffle will go directly into similar conservation projects in New Hampshire.”

As Thanksgiving approaches, we are reminded of all we have to be thankful for this year. At the NWTF, we are immensely thankful to be a part of the greatest conservation success story in history. We are also grateful for the time spent outdoors with loved ones and to our dedicated volunteers, members and staff who keep our mission strong.

You can purchase Tamworth Distilling’s unique Thanksgiving-flavored whiskey in store in Tamworth, New Hampshire; at its sister store, Art in the Age in Pennsylvania; or, for those out of state, seelbachs.com is shipping Bird of Courage and many other Tamworth Distillery products to numerous states.