The Joy and Predicament of New Dirt

Initial forays at properties you’ve never hunted can be tricky. Follow these steps to tackle the learning curve and find early success on fresh ground.

Every turkey hunter loves to yelp new dirt. To paraphrase legendary hunter Dwain Bland, there’s nothing better than to be dropped off in the dark at a place you’ve never been.

However, that exciting, uncertain experience comes at a price: familiarity. After all, if you’ve never hunted a place, you cannot be sure how turkeys use the land and react during various situations. Shoot, you can’t even be certain you’ll encounter turkeys there. That doesn’t suggest that you should avoid fresh dirt. It simply means you’ll be at a slight disadvantage the first time you hunt it.

Don’t fret. You can find quick success at new ground by using a steady, common-sense approach. Here’s how.

Before you hunt a new area, learn as much about it as possible. Years ago, hunters listened to word of mouth and pored over paper topographical maps to form hunting strategies. Nowadays, the process is far easier. 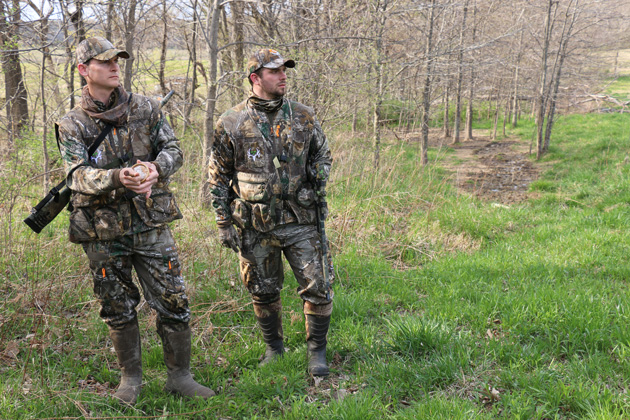 Start with the basics. If another hunter or landowner has turned you on to a property, take a few minutes to question them about the ground — where they typically see turkeys, likely setup spots, areas to avoid and other considerations. This anecdotal advice can prove especially useful for private tracts, as landowners or caretakers can explain property boundaries, note freshly planted areas or spots with livestock and sometimes provide up-to-the-minute reconnaissance. Even with large public tracts, a throwaway comment — “I used to always hear gobbling over by the river,” for example — might set you in the right direction.

With that info in hand, turn to technology — specifically, speed-scouting on a laptop or your phone, using online services or mapping applications. Study maps to learn as much about the terrain as possible. Note fields, pastures, meadows, timber, food plots and logging roads. Also, study contour lines to learn the locations of ridges, ravines, bottoms and other topographical features. More important, note access points and property lines.

Even a few minutes of study the morning before a hunt can provide starting points. Then it’s time to put boots on the ground and gain first-hand insights. 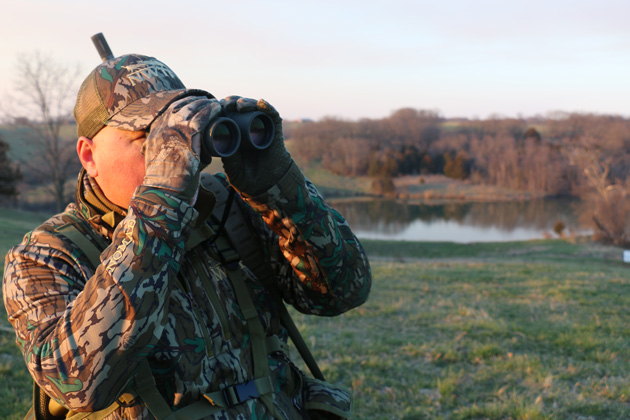 Generally, adopt a low-impact approach during your initial hunt at a new place. That doesn’t mean you shouldn’t try to get close to a gobbling bird or use excited calling when the scenario calls for it. Just don’t take chances. Be circumspect about moving through unfamiliar areas. For example, if you’re unsure about the cover and terrain between you and a roosted gobbler, it’s wiser to set up a bit farther from the bird. You can get more aggressive after you’ve learned the lay of the land and identified travel paths that let you slip around unseen and unheard. But when in doubt — as will often be the case the first time at a new spot — using a more passive strategy to avoid bumping turkeys is a safer bet.

Sometimes, I’ll hunt new spots during late morning or afternoon, when daylight lets me fully grasp the cover and terrain. That might seem akin to punting, but it often pays dividends in spots with thick cover, abundant water or challenging hills and hollows. If nothing else, a hunt/scout foray lets me learn the ins and outs of the land and gauge potential hotspots. Further, I can use binoculars to glass open areas — even timber — to make sure I don’t blunder into unseen turkeys. Even if I don’t encounter turkeys, I’ll likely glean important info that will put me closer to them the next time — likely even the next morning. And there’s no guarantee I won’t score, as late mornings and afternoons can be great times to hunt.

When hunting new spots during early morning, I’m especially cautious. Usually, I’ll identify a good listening spot — such as a high ridge, secluded field edge or timbered creek bottom — and wait there until gobbling time, hoping to hear roosted birds nearby. Meanwhile, I use mapping apps on my phone to note the location of gobbling birds and find ways to approach them. If a situation seems ideal — a bird gobbling on a point near an open logging road, for example — I’ll try to slip as close as possible and start the game. But if I’m unsure about the precise location of turkeys or how to get near them, I’ll hang back a bit until I can make a smarter play. 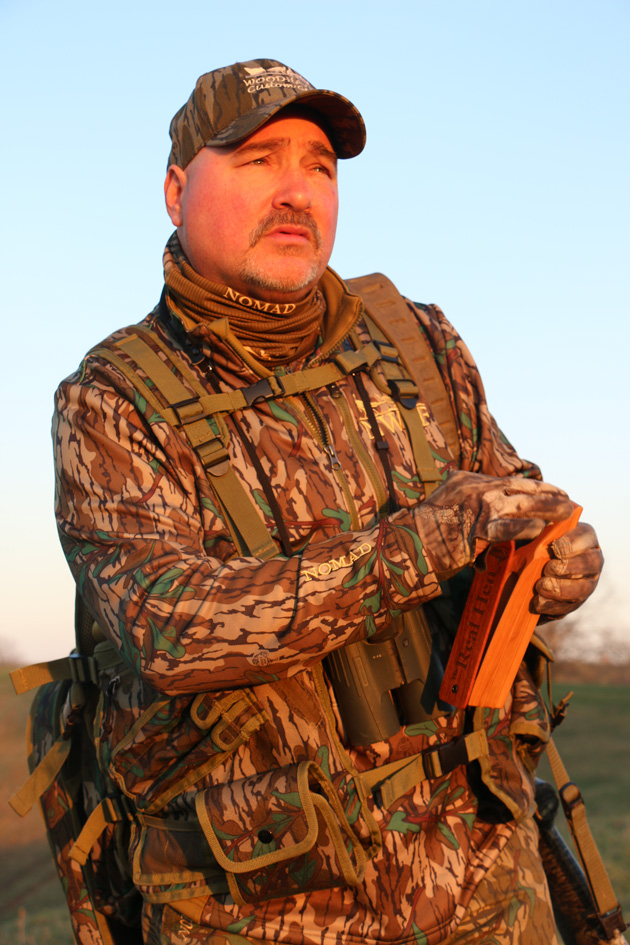 If birds remain vocal as morning progresses, I’ll study terrain and use phone maps to find viable approach routes and potential setups. That approach doesn’t differ much from my basic strategy on familiar ground. I’m simply taking things a bit slower and feeling my way through the process to avoid spooking turkeys.

Likewise, if action slows during mid- or late morning, I’ll search in person and online for good setups and spend some time calling there. That can seem boring sometimes, but it’s a great way to kill gobblers, and it keeps you from stumbling through unfamiliar woods.

Above all else, I want to learn and observe during my first hunt at a new spot. No matter how turkeys react, I constantly search for sign, study the cover and lay of the land, and keep my eyes and ears peeled for birds — even those off the property. Even a tiny bit of intelligence puts me a step closer to scoring the next time out. Often, my ultimate success or failure at a spot hinges on how much I’ve observed and learned during previous visits. 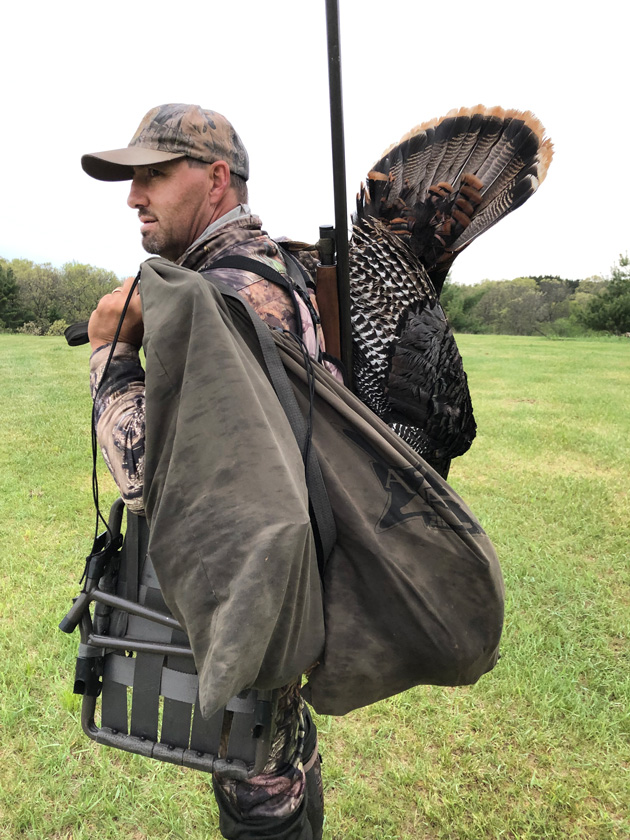 I’ve experienced some great first hunts at unfamiliar spots (see the sidebar). I’ve also endured some stinkers, mostly because I misjudged the situation and didn’t know the land. Don’t let the possibility of failure dissuade you from exploring new spots. Fresh experiences add to turkey hunting’s sense of adventure and open up new hotspots. And with the right approach, your first time in might result in a happy walk out with a gobbler.