Toward the season’s end, turkeys have been pressured relentlessly. However, you can still follow these tips for fast late-spring success.

While scouting before the final period of Wisconsin’s 2019 turkey season, I learned that two gobblers were using a buddy’s dirt field every day at dawn. I’d already bagged a few birds earlier that season, and it was the last hurrah at putting one more in the freezer. Game time.

The bird world came alive, with gobbles rumbling throughout the timber above the field edge where I sat. Four longbeards were gobbling. Because two had been with hens each morning, I placed a hen decoy where any turkey entering the field would see it. I intended to attract at least one live hen, which would bring in the gobblers, too. I hunkered in a depression behind a dirt mound along the field edge — the only cover with adequate shooting coverage — and waited for fly-down-thirty.

As the hens started talking on the ground, I pushed their buttons with aggressive mouth calling. The gobblers heated up, so I knew keeping the hens feisty was the key. If that didn’t work, I hoped the birds would still follow their routine and naturally walk by my ambush. Then, a hen rushed in and started cussing out and pecking at the rubbery imposter. Gobbling ceased, and spitting and drumming ensued — the gobblers were close.

At 20 yards, my 12 gauge roared, and I was home for an early breakfast with Mrs. McDougal, and a gobbler on my tailgate. Like dozens of late-May hunts before, it had been quick.

By late May, gobblers in the East, South and Midwest have been hunted relentlessly. They’ve been called to. They’ve watched hunters jump out of blinds. They’ve busted every imaginable decoy spread. But despite the pressure, they have one weakness: They’re still in full-on breeding mode, but with fewer hens available to breed than earlier in the season. That makes them susceptible to wise hunters. I’ve experienced my fastest hunts during this time. With some strategy, you can, too. 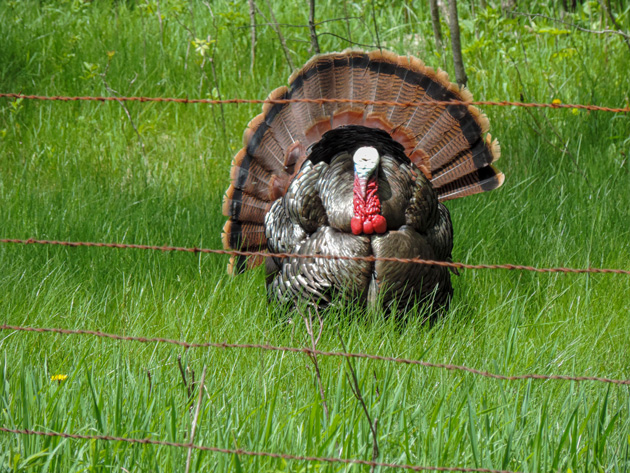 My all-time favorite and most effective ploy for late-season gobblers — especially if I’m bowhunting — is to pattern them on private land. Like my anecdotal opening suggested, gobblers frequently strut alone or with a few hens at the same spot morning after morning during the season’s final days. I’ve tagged dozens of gobblers after seeing them strut at a location for two or more consecutive mornings. Although I consider myself a skilled caller, I usually position myself so calling isn’t necessary unless the birds do something unexpected. I use decoys and set up where I expect the birds will be based on a couple of consecutive mornings of scouting. If they respond to the decoys, I’ll get a shot. If they pay the decoy little attention but go about their routine, I’ll get a shot. It works for me every spring. That situation — birds strutting for consecutive mornings in an agricultural field — is a best-case scenario.

Some hunters have only public lands with heavy timber to hunt. I also hunt in those circumstances, but in that case, I don’t rely on one parcel. I cover a ton of ground until I find a gobbler. If I hear no gobbling at dawn, I move to another location or parcel immediately, and I call a lot. I keep moving until I spot a bird or hear a gobble (see sidebar for more on efficiently covering ground).

Obviously, late-season public-land gobblers are the elite. They might give you the slip, but if you don’t spook them, they’ll likely be in the same vicinity the next day at about the same time. For example, if I get a bird gobbling at noon but he hangs up out of range and leaves, I go back to that spot at 11 a.m. the next day and start advertising. However, I’ll use a different call and set up a bit differently for a fresh look. Until spooked, late-season birds can be predictable and will eventually slip up if you hunt them tactically. And to that point, the foliage influx helps you execute tactical maneuvers on moving turkeys.

Late-season gobblers can be tough to kill where they’ve been pursued relentlessly for a month or more. But, with fewer hens to breed and their breeding urge still raging, lonely gobblers can be susceptible to well-laid plans. Pattern turkeys at private agricultural fields, or cover tons of public ground in a tactical manner. Those ploys have yielded me dozens of late-May gobblers with bows and shotguns, and should you put them into play, I’ll bet they’ll produce for you, too.