From ample land access and tag availability to cooperative weather and terrain, many factors contribute to a hunt. Some are helpful, others not so much. Defining what makes for a tough hunt is … well, tough. Today the weather may make for a truly tough hunt. Tomorrow, it may be elusive birds. We asked five hunters what, in their minds, were their toughest states to hunt and got some interesting answers. Even with tough hunts, these hunters are itching to head back to the states they find most difficult. What hunts stand out as your toughest?

Defining tough states to turkey hunt is relative to a number of things: access to hunting properties, tag availability, turkey populations, weather and travel distance, as well as many other factors. Personally speaking, Florida was a particularly difficult state for me to get a bird. I trekked to the Sunshine State on five spring hunts before I ever even saw a wild turkey. I had come to believe the Osceola turkey was a mythical creature in the class with unicorns. It was when I was tasked to escort and call for a new hunter for a television program did [I finally see] a tom looking like a black Volkswagen wearing limb hangers. He waltzed 200 yards in a straight line and, despite a gun jam, dropped in our lap. Perhaps I only had to pay my dues, because once I broke the ice and completed my Slam, the Florida birds became more visible and somewhat easier to hunt. My second hardest state is Arizona for a Gould’s gobbler. This is due to the limited number of tags issued each year, but I'm an optimist and continue to buy chances on the lottery for the opportunity to hunt there. Maybe one day I can tell you about the difficulty of packing one of those big birds up a mountain. The upside of this is that no matter the level of difficulty each state offers, we must give thanks to the NWTF for making it possible to turkey hunt in 49 of these United States.  — Brenda Valentine, NWTF spokesperson

I might get some arguments from folks in Louisiana, Mississippi, parts of Georgia or even panhandle Florida, but I think Alabama and South Carolina have the toughest turkeys in the country. These heavily pressured Easterns have seen it all, and they’ve been pursued for decades by the best hunters in the world. ’Bama and Carolina birds often don’t gobble much, and even responsive turkeys are finicky about walking the final few yards into range.

Nonetheless, I really enjoy hunting both states. They have solid bird numbers and incredible turkey hunting traditions. Moreover, I love the challenge those difficult turkeys present. A friend once said he hunted Alabama because he had to do everything right to kill a turkey there, and that helped him succeed in other states throughout spring. I agree. If I have to pick the No. 1 toughest state, I’ll go with South Carolina. I’ve experienced some great hunts in Alabama, interspersed with many tail-whippings, of course. South Carolina has probably frustrated me like no other state, though. And I can’t wait to go back. — Brian Lovett, Turkey Country field editor

I have hunted turkeys in a variety of states and terrain, but no turkey hunt is more challenging than chasing what we call the 'cliff divers' of the Missouri River Breaks in Montana. For the past five years, we have participated in what's known as our “backcountry walltent turkey hunt” with a group of seasoned hunters, including some of the best callers I know. In those five years, there have been only four tags notched TOTAL by an average of eight to 12 hunters every year! Throw everything you know about conventional turkey hunting out the door, and put on your good hiking boots because these thunder chickens don't like decoys, don't like to respond if you're within 100 yards, and they've perfected the act of diving cliff to cliff to evade predators, including the two-legged kind. Loaded with coyote, bobcat and even mountain lion, the ‘Grand Canyon of Montana’ is rugged, steep and extremely harsh in the winter, but these birds, more like mini velociraptors than overgrown chickens, have adapted well to their environment. It's literally run and gun, sometimes up to 8 miles per day, in hopes of spotting them and making a play across the challenging terrain. It's essentially like hunting big game and has become a favorite week of ours that we look forward to every year.  — Jana Waller, NWTF spokesperson

This, in my personal opinion, is easy to answer. By far the most difficult states or turkeys to hunt are the southern Easterns — namely Georgia, Alabama, South Carolina and Mississippi. Really all the southern states with the exception of Tennessee, where it seems they have had a boom in turkey populations. There is something about the habitat and attitude with the turkeys here that make overall typical turkey hunting difficult. You have to throw away all you know, and hunt on instincts and experience to be consistently successful. — Michael Waddell, NWTF spokesperson

Florida; And not for the reasons you'd expect. My experiences in Florida vary greatly from ideal hunts to ... well ... not ideal. Florida, like many states in the South, has its own challenges; the biggest of which, in my opinion, is water. Whether it's coming from the sky or the myriad swamps, creeks, lakes, etc., water is a factor that can make or break your hunt, depending on which side you're on. Combined with water are all of the critters that live in and around it — mosquitos, snakes and alligators, to name a few. While alligators seem the biggest threat, an encounter with them is less probable than with the disease-carrying mosquitos and a large variety of venomous snakes. But don't let these small hurdles prevent you from going after your Osceola. A good Thermacell, a pair of waterproof snake boots and paying attention go a long way toward keeping you safe. Hunting in Florida is all about the experience — challenges included — and I've never hunted there when I didn't come back with memories to last a lifetime. — Matt Lindler, NWTF acting vice president of communications and Turkey Country editor 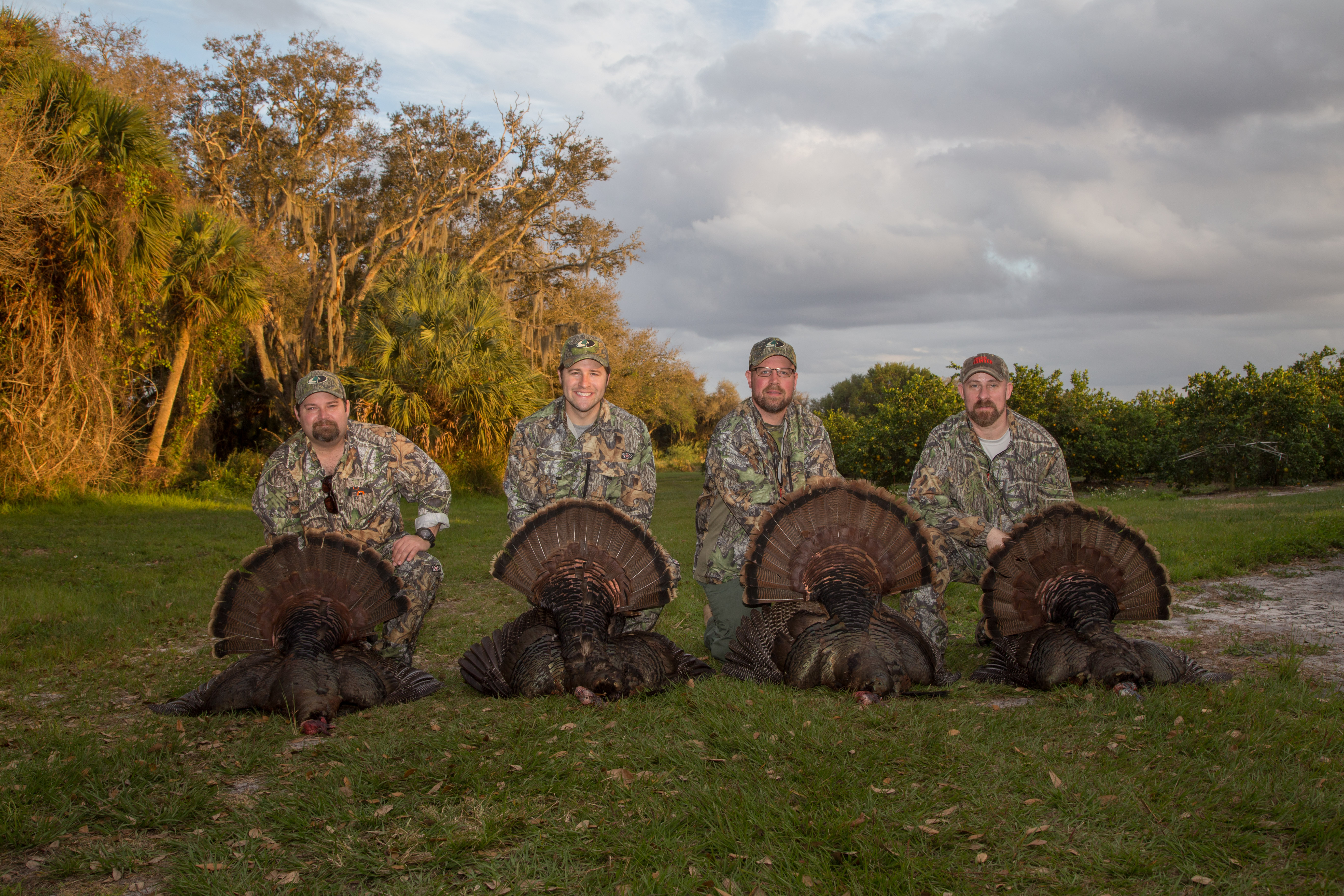 I've never met a dead turkey I didn’t like and I’ve met a lot of dead turkeys. From almost every state in the U.S., all the way over to New Zealand, I feel like I’ve seen it all. I’ve called a turkey into my ground blind in Tennessee, and in Mississippi, a frisky tom landed on top of my box blind and sat there for over an hour trying to figure out where that hen was. But in all the states that I’ve hunted, I would have to say that Florida is my trouble state - and this is my home state, go figure.  But there is actually a reason it’s my trouble state. I, along with some great friends, lease about 1000 acres in North Florida and the property is perfectly suited for pigs - not turkeys. Yet I find myself only wanting to turkey hunt on this property. There isn’t a lot of clearing and the only visible areas are mostly cut roads. So, even though I know the toms are there, they have the advantage every single time I try to fill my tag. Does this deter me from going back year after year? No way, in fact, it really challenges me to think outside the box and how I would normally hunt these incredible birds. My strategies change, my calls change and my mindset changes.  This is why Florida is my toughest state to bag a tom and I cannot wait to head back down there in a few short months. -— Daniel Lee Martin

The toughest two states to get a Turkey from are Delaware and Nevada.  What makes it hard is fact that the lack of Turkeys makes it hard to draw a Tag.  The good news is that once you draw a tag and in the field, you shouldn’t have a problem harvesting your bird. There’s public land in both, so put in for your licenses and when you draw, you go! Now, the toughest turkeys to hunt are Easterns in the South Eastern part of the US, GA, AL and MS are at the top of the list. These birds have been hunted hard for generations of birds spanning some 40 years.  — Jeff Budz, Tag It Worldwide