“I’m very pleased with how much Briar has learned,” Mike Morrell, owner of the 18-month-old turkey dog, said this past December. Mike wanted to see how Briar, who comes from a turkey dog line developed by Carroll Gathright of Dillwyn, Virginia, would do on a solo outing without his 7-year-old mentor, Bailey.

How Briar reached that point is instrumental for hunters interested in training turkey dogs.

Briar was born in June 2019, and Morrell purchased the dog in August. In September, the duo attended 12 one-hour obedience sessions in which a trainer coached Morrell on how to teach his dog basic commands. Morrell believes obedience training forms a strong foundation for developing hunting skills and helping the canine become a beloved family dog.

When Briar reached 12 weeks old, Morrell began training him to learn to retrieve turkey parts: wings, feet, beards and tails, with the goal being able to fine-tune the instincts the breed possesses. That training consisted of Morrell dragging a turkey part on a string attached to a rod and encouraging the pup to chase and chew on his prize.

“You want the dog to succeed, so I don’t make the training too hard too fast,” Morrell said. “I begin by hiding a part 20 to 30 yards away in the woods and letting the pup trail and find it. Locating a wing, for example, is positive reinforcement itself, but I make sure to also give the dog treats and praise. Eventually, the training evolves into parts being hidden farther away and even hanging above the ground.”

Morrell said acclimating gun dogs to loud noises and gunfire is another critical skill. This also begins from Day 1, as Morrell made loud noises such as banging pots while the dog was eating or playing so a gunshot later would not alarm him.

“I take a very slow and graduated approach to this, as you never want to scare the pup,” he said. “I introduce gunfire with a .22 pistol. I get far away, and then I will work closer to the dog over time, working up to a 9 mm, then a 20-gauge shotgun and eventually a 12. Throughout all of this, I’m mixing in hunting for turkey parts and plenty of praise and treats.”

Another important command Morrell teaches his dogs is “dead bird.”

“This is critical when you have a cripple or a dead bird that you can’t find,” he said. “Dogs actually learn this quickly. I will hide a wing or tail, and then in a deep slow voice say, ‘deeaadd biiirrrd.’ As this skill develops, I will hide the part, then shoot a shotgun and then give the command. I initially walk with the pup to get him in the right area until his instincts take over. A dog instinctively reacts to this by making small circles. The fundamentals you are teaching are for a dog to scour an area until he finds what he’s looking for.”

Obviously one of the most critical skills for turkey dogs is teaching them to lie quietly in a blind after a scatter. Morrell said this takes time to teach. Many fall turkey dog enthusiasts use a bag to encase their dogs. Morrell chooses a 12-foot pop-up blind about 2 feet tall with a blanket within. That’s where obedience training really pays, as the dog already knows how to stay. Giving treats also helps the animal remain still. 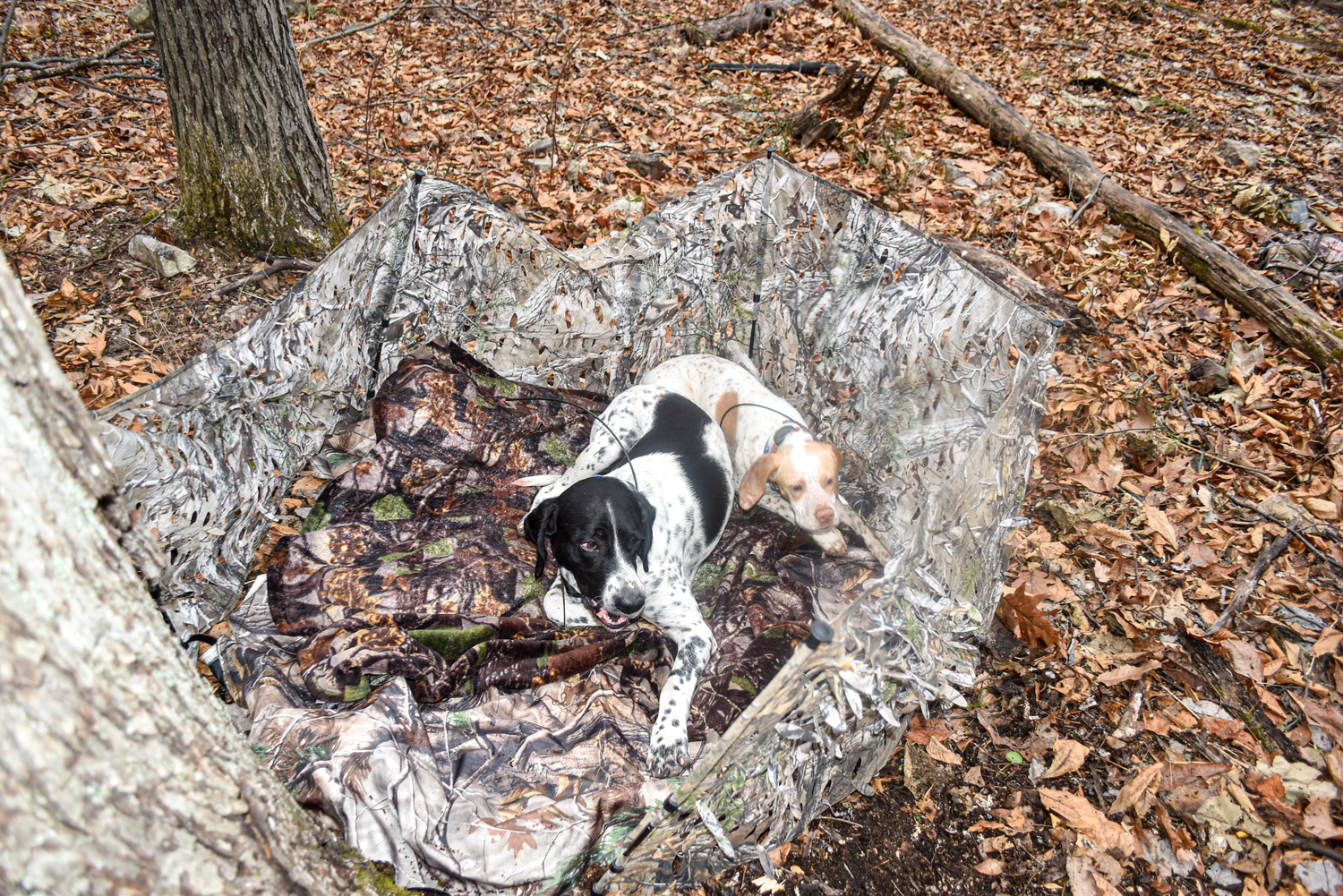 Morrell brought the then-6-month-old Briar on its first turkey hunts in December 2019.

“Briar would tag along with me sometimes and be under my feet,” he said. “But there were other times when he would range out as far as 700 yards with Bailey. Understandably, he didn’t have the confidence to go out on his own. One of the most important things that happened, though, on those early hunts was that Briar joined in on a flush with Bailey. Briar also participated in his first kill on a hunt with Bailey.”

It was not until October 2020 that Briar undertook his first solo flush and subsequent kill.

“That first solo flush and kill is so special in many ways — all the training and breeding and work pays off, and you see that pup put it all together,” Morrell said. “Briar barked great on his first flush, but based on my experience, it takes about two years for the barking to really develop. That trait and having the confidence to range farther and farther comes with time and experience.”

Morrell said Bailey has been an ideal mentor for Briar, as the older dog’s dedication to finding and flushing turkeys has helped keep the young one focused. In fact, Briar is a different dog when he’s around his mentor and is all business.

It’s also important for Briar to develop self-reliance. One day, he will take Bailey’s place as the lead dog on turkey hunts and will have to mentor young charges.

“Although it’s great for a young dog to have an older one as a mentor, it sometimes leads to the younger one letting the older dog do all the work,” Morrell said. “I want Briar to gain the confidence to range farther out on his own and put the whole game together, all of which will come in time.”

So how did Briar perform that December day? He hunted hard, obeyed well and ranged well, but because of several years of poor hatches in the Virginia mountains, we couldn’t find any birds or even fresh sign. But Briar is on his way to becoming a superior turkey dog.