Transform your turkey gun into a hog exterminator

They have been called the "poor man’s grizzly" and with good reason. Feral hogs, both boar and sow, under the right set of circumstances can be an exciting animal to hunt. These creatures are tough. Their body build resembles that of a buffalo, being higher and heavier in the shoulder region. Their legs are short, and in tall grass it can be difficult to get a shot into the heart area, which is located low in the body. Hunters generally take most feral hogs at short ranges, often inside 100 yards.

For defense, the feral hog has a formidable armor in the form of an extremely thick layer of cartilage over each shoulder. On large hogs, it can stop most small caliber or poorly constructed bullets. I have seen a large boar take a solid hit from a .270 Win. and stay on its feet, ready to fight. Large feral hogs can weigh 600 pounds or more, but they don’t have to be large to be mean. A cornered 100-pound sow can put up a good fight and be hard to put down for keeps. Due to their size, build and sharp senses of hearing and smell, they can test the hunter’s skills and the knockdown power of most firearms/loads. 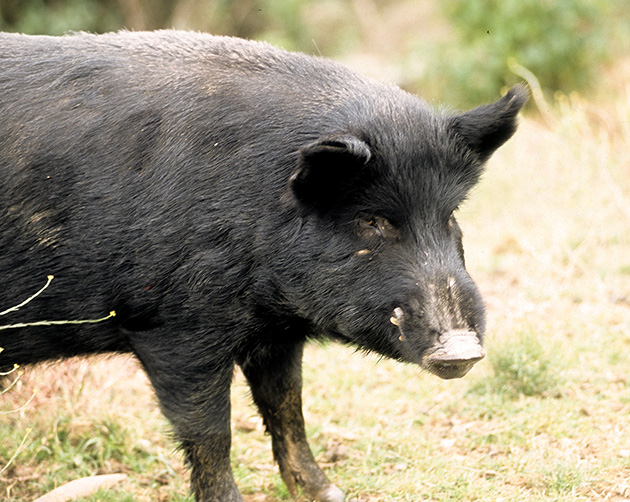 WHY A SHOTGUN FOR HOGS?

Most 12 and 20 gauge turkey shotguns of today have features that make them ideal for hog hunting. They are fairly compact, allowing the hunter to ease with stealth through brush when closing the distance. They have a dull or camo finish to keep the hunter hidden at close ranges. Most are equipped to handle heavy recoil, necessary as a 4/5-ounce to 1-ounce slug produces a lot of recoil. They use screw-in choke tubes and probably are equipped with either open rifle-type sights, a shotgun scope or a red dot-type sight, making single projectiles accurate after adjustments.

With many turkey shotguns, all that is needed to turn it into a feral hog gun is to remove the tight turkey choke tube and replace it with a choke tube that gives you the tightest groups with a chosen slug load at 50 to 100 yards, the ranges that many feral hogs are taken, especially with shotguns.

As a rule of thumb, if you want to shoot Foster- or Brenneke-type slug loads, an improved cylinder choke tube is a good place to start. Time spent on the range will help find the choke tube that provides the tightest groups. Both Foster and Brenneke slugs were designed for use in smooth bore shotguns. 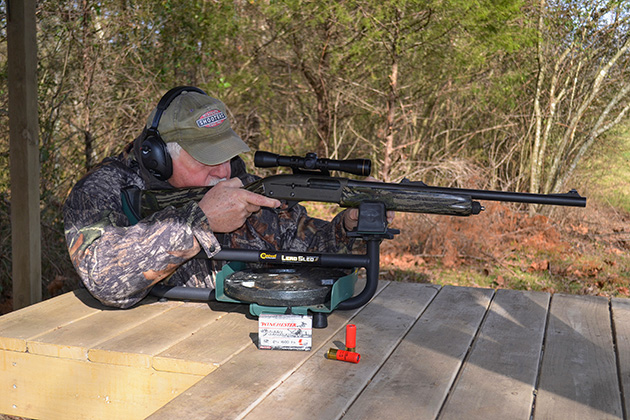 If you want to shoot sabot loads, then you may want to consider getting a rifled shotgun barrel, which can cost up to $400 or more, or purchase a rifled choke tube designed for sabot loads at a cost of about $50. I use a Carlson’s rifled tube with my Benelli turkey gun, and at 100 yards, it shoots 437-grain sabot slug loads into a 3-inch group consistently. It takes a rifled barrel or a rifled choke tube to put the spin on the sabot in order to stabilize the projectile on its path to the target.

One question that comes up when discussing the use of shotguns on large, tough, hogs: “Is a slug adequate to put a wild hog down in its tracks?” Without writing a book on the subject, the best short answer is, as long as you hit a large boar in the vitals with a slug delivering at least 1,200 foot-pounds of energy, he will usually go down cleanly. I emphasize, in the vitals, which are located low in the front of the hog’s body. Go online and study hog anatomy or use targets that show the vital area of a hog.

Most 20-gauge Foster and Brenneke loads reach the 1,200 foot-pounds of energy at about 50 yards, and the sabot loads at 100 yards. In 12 gauge, most slug loads carry the 1,200 foot-pounds energy level out to about 100 yards, with some sabot loads taking it to 150 yards. Take your time and study the ballistic tables for the load you plan on shooting, and then make sure your gun will group that load at the longest range you plan on shooting. Just like finding the right turkey load, shotguns can be finicky about which slug load they will shoot well consistently. Do your part and learn what your shotgun likes in slug loads. 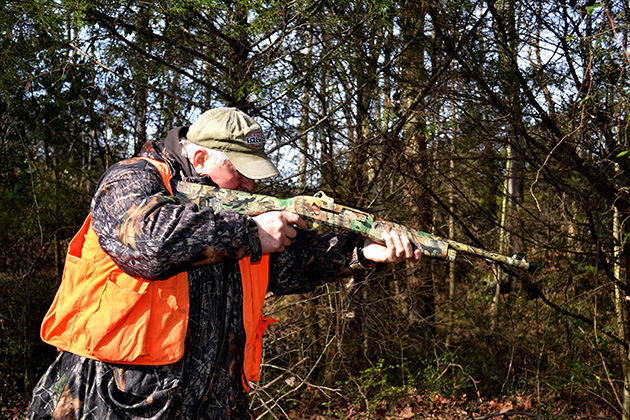 As I have learned from switching my turkey guns to hog guns, the slug load will require range time adjusting the optics you have been using for turkey loads to shooting tight groups at longer ranges with slug loads. Just don’t forget to reset the sights before next turkey season.

Another tip is to take a recoil absorbing shooting rest, such as a Lead Sled, with you to the range when sighting-in and testing slug loads. One of the excuses some hunters give for not having their hog guns sighted in for accurate shooting is that shooting them on the range is too punishing, so they cut range time. A recoil absorbing rest takes the pain out of finding the choke tube that best matches the load you select to use. To adjust your aiming devise to shoot tight groups at the longest range, you will be shooting at a low-slung hog. 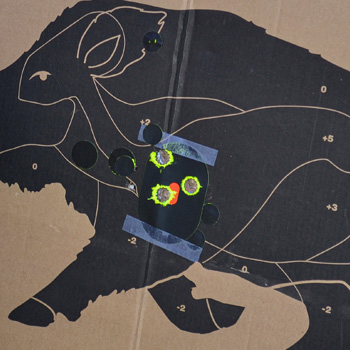 Feral hog populations in the U.S. are soaring, and, while they are a rapidly growing problem to rural landowners and wildlife managers, they offer a great hunting opportunity for hunters, especially during the offseason when there are few hunting opportunities. Also, since they are considered a feral animal in most states, they can be hunted year round, with no bag limit. And, when hunting them at close range, they can have some of the same close-quarters intensity of a grizzly hunt at a fraction of the cost. 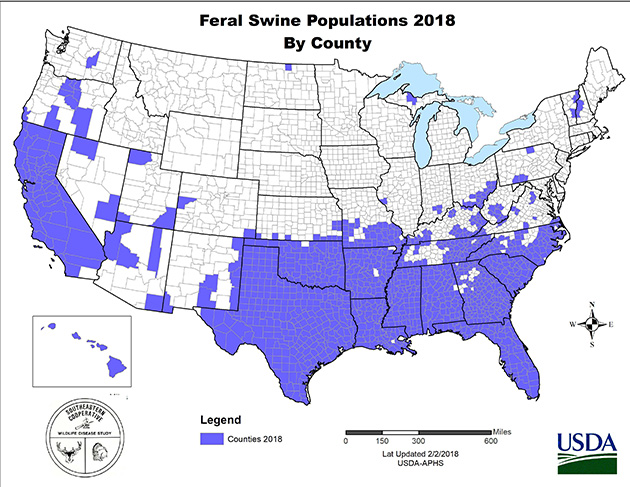 The boar is armed with long canine tusks, which protrude from the lower jaw, and grow fast. The length of these tusks can reach up to 6 inches or more. Mounted on a plaque, they make a great addition to any trophy room, as does a shoulder mount. 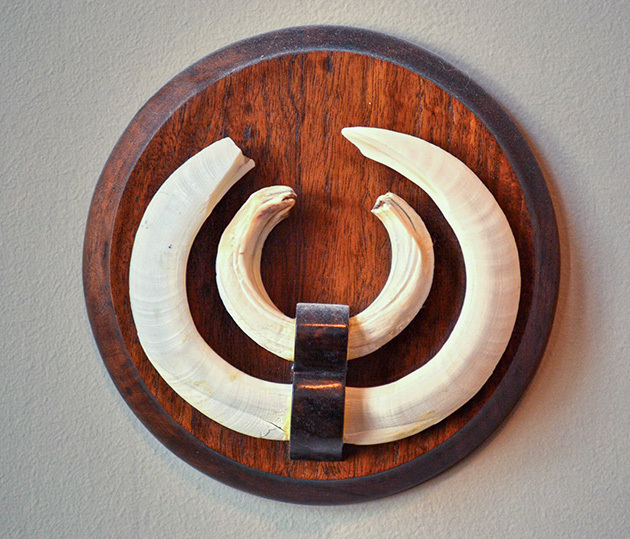 So, if you have the opportunity to hunt feral hogs, don’t leave the turkey gun at home. With some range time and the right choke tube and ammo, it can serve you just as well as a hog gun as it does for spring gobblers. 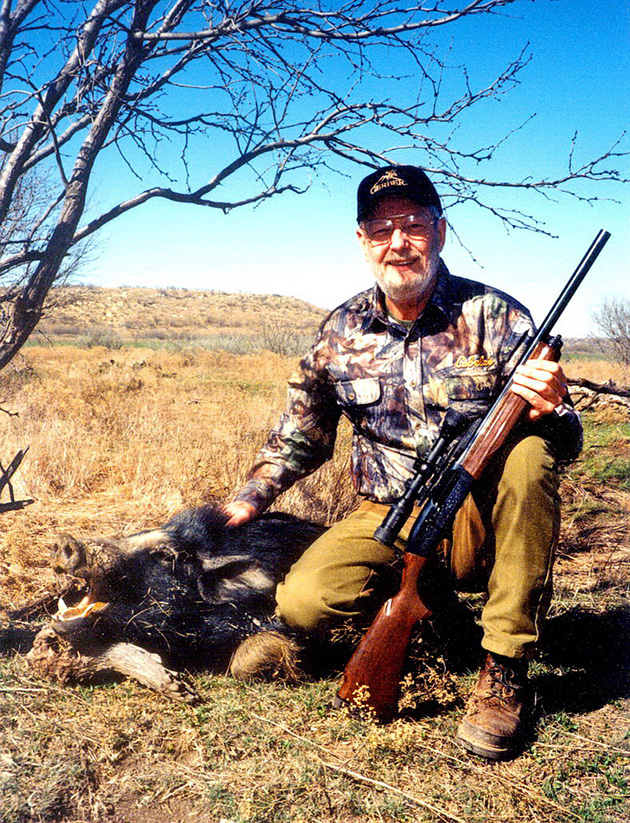