Avian-X released the Trophy Tom at this year's SHOT (Shooting, Hunting and Outdoor Trade) Show to an eager market waiting on something new and unique from the maker of premium decoys.

Unique it is. This super lifelike fake shows the attention to detail that is expected from Avian-X: Its iridescent bronzes and greens are spectacular in the morning sunlight and still vibrant in shade. Paired with your own fan and beard, it transforms quickly from a jake to a challenging longbeard, but it's scaled-down body keeps it from being too intimidating to other gobblers.

What's unique is the strutter plays double duty as wall-hanging trophy display. From the wall to the woods and back again, the chest-mount display is more compact than a full-size strutter and much lighter. Without the fan, it even fits in your vest.

I had the chance to hunt with it in South Carolina's early youth season and three days during the regular season, and it looked real in my decoy setup and was easy to carry. Better instructions on how to connect the collapsible stake would be appreciated, but between three of us, we figured it out. Unfortunately, a few days of cold and rain shut down the local breeding activity, and it saw no action, so I loaded it into the truck and headed to Florida for a warmer climate.

I placed it out with a hen on this evening's hunt. Two hens came in and didn't spook, but no gobblers showed to be able to test their reactions. Stay tuned. The hunt continues, and I will keep you posted on its effectiveness.

Fourteen toms flew down within 30 yards of our roost setup along a canal that borders a multi-thousand-acre orange grove. We were shocked by the early sound-off as a crow flew overhead at 6:35 in the morning, eight minutes earlier than the previous day, according to our friend Jeff Budz, who reserved this spot for Fred and me. This was Fred's chance at his second Osceola, his second bird ever, after tagging his very first tom yesterday morning two hours away on a cattle ranch. In the twilight of early morning, we watched blob after blob slowly materialize into turkeys on the limb as the skyline brightened and our vision improved.

Excited as he was to see birds on a limb, Fred was buzzing with anticipation when we realized most of the birds we saw were gobblers. The first early gobble led to others and pretty soon, one after the other flew down and hit the ground to our left. In front of us and slightly to our right, I'd placed the Trophy Tom decoy, a Laydown hen as well as a feeder hen. Testosterone was high and the toms busily chased each other around, paying no mind to the fakes a few yards away. They had old rivals to put in their place. They'd deal with the interloper later.

"What do I do?" whispered Fred as the bachelors bumped chests, tied necks and strutted nearly within touching distance. "Pick the biggest one you see," I quietly answered, "and when he separates from the others, shoot him." That's just what he did.

While there was no interaction with the decoys, plus one was that it didn't spook them either. That's a worry when you're looking at a decoy that is only part of a turkey's shape.

With Fred and friend Jon on their way to Georgia for another hunt and I on my way home to SC, I stopped by a 10-acre hayfield after Jeff gave me the gate code and told me to sit there for a couple of hours before the 8-hour drive north. I did as I was told, of course.

I place the Trophy Tom at 15 yards with a breeder hen a few feet in front of it and waited for daylight. Gobbling again came early, but from 300 yards across the canal that acted as the property boundary and the old, overgrown orange grove it serviced.

This could happen, I thought and settled in for a wait. A hen flew down out of sight and eventually appeared on the hay field as she bugged and stripped seed heads.

A noise roused my attention, and I noticed a piece of machinery inch its way toward my end of the grove, just across the canal. It was loudly pulling up old, dead orange trees and beeped incessantly as it backed to the front of the row to drop them off. This went on for half an hour. There's no way a gobbler is going to come out now, so I sorted through my gear and quietly putting calls back into my vest. The machine moved away, but I assumed the hunt was over, for at least several hours.

As I stood, two hens flew the canal from the same row the machine just left. A bearded hen led the way and the other followed as they pecked along the fallow field edge. The first hen had moved on by then. I pulled out a call and yelped softly. No reaction from either hen. I ramped up the volume; nothing. I ran a series of yelps and cutts and a tom gobbled in the orange grove less than 100 yards away. Hmmm.

I gave it few minutes then produced a soft cluck and purr. A gobble rang out behind me. Close! Gun up I waited with my eyes pointing along the field edge on that side. He slipped out, saw the Trophy Tom and Laydown hen and sprinted to the decoys. In full strut, the tom chest bumped the decoy and circled. Gave a slight crane of the neck then faced him again, blocking his path to the hen. Another taunting neck crane and the bird died right there.

There's no question this decoy works. Sure, it depends on the temperature of the local toms, but they do not shy from it, even if uninterested. When interested, however, the lifelike coloration and real turkey fan is too much to bear and can end with a show you won't forget. 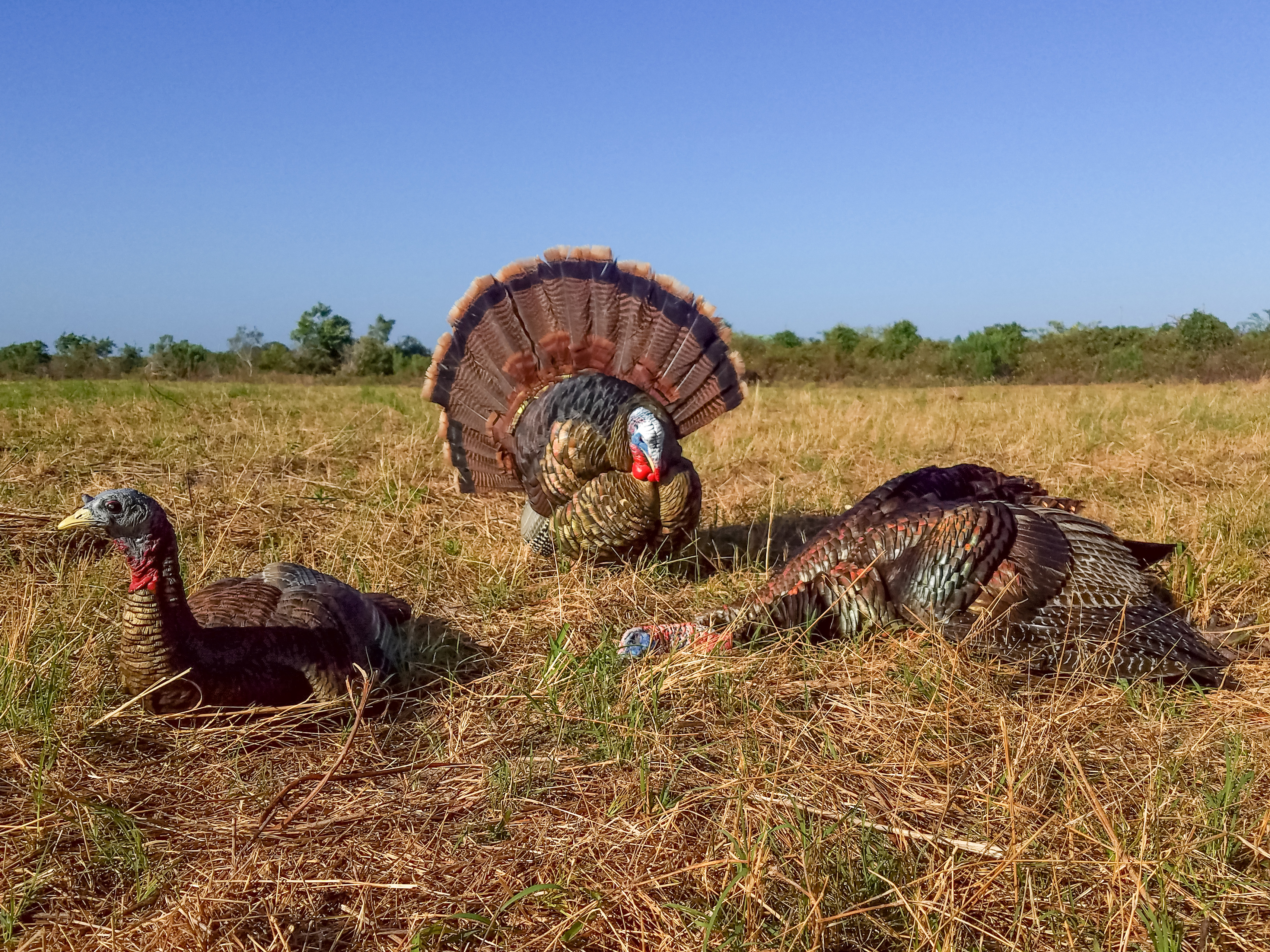