We’ll likely never know any details from the first turkey calling contest. It probably occurred in a back room when a few hunting buddies decided to see who could yelp the best.

But as turkey populations were restored and hunting opportunities grew during the mid- to late 20th century, folks became increasingly fascinated with turkey vocabulary, and contests sprang up throughout the country. Some were hometown affairs hosted by tiny sportsmen’s clubs, but others were NASCAR-esque extravaganzas that attracted thousands of spectators. Today, the legacy of calling contests remains. The interest and education these competitions provide have taught thousands of people how to hunt and helped build the modern turkey industry.

“There is no question that turkey calling contests have helped bring turkey hunting and its conservation efforts, such as the NWTF, to the forefront of the hunting industry,” said Steve Stoltz, the 1993 World Championship Turkey Calling Contest champion, who has competed in calling competitions since 1979.

World champion Preston Pittman, who started competing in calling contests at age 16 and continued for more than 35 years, had a straightforward opinion on the historic impact of calling contests.

“Turkey calling competitions made this industry what it is,” he said.

Nowadays, many turkey fanatics still follow and enjoy contests. The NWTF’s Grand Nationals Calling Championships held each February at the NWTF Convention and Sport Show in Nashville, Tennessee, are acknowledged as the Super Bowl of turkey calling and annually attract several thousand spectators. Also, the World Championship Turkey Calling Contest (see sidebar) provides a major venue for top-level calling competition. And many NWTF-sanctioned local, state and regional contests are held throughout the country.

The history of calling contests stretches back decades, mostly in areas where turkeys were never extirpated and the hunting tradition wasn’t broken. The World contest began in 1940 in Mobile, Alabama, and the Yellville Nationals contest in Yellville, Arkansas, started in 1946. In the 1970s and ’80s, as turkey hunting fever began to grip America’s sportsmen, the number of local, state and regional events boomed, especially in areas with huntable turkey populations. Soon, huge national-level contests followed. Organizers held the first U.S. Open Turkey Calling Championship Contest in 1976, according to the website of the Pennsylvania NWTF State Chapter. In 1977, the NWTF held the first Grand Nationals at that year’s convention. In the 1980s, the Levi Garrett All-American contest sprang up. Competitors say the burgeoning scene was electric.

“Every community, every small town throughout the Midwest, had a turkey calling contest,” said Ray Eye, who called in contests from 1971 through 1987 and won or placed in more than 100. “It was a huge event. They used to call it a ‘doin’s.’”

Eye said many communities held large festivals centered around a calling contest (a tradition that continues in Yellville, incidentally), and some even held competitions during spring turkey season. And it wasn’t uncommon to have up to 700 people in the crowd for local contests and about 1,200 at the Missouri State event. Pittman said small contests would attract more than two dozen competitors, and larger venues would have 75 or more entrants. The World had more than 100 competitors one year.

“The number of contests was at an all-time high,” Stoltz said. “This was mainly due to the fact it was educational and entertaining, and also a great way for an organization or local chapter of the NWTF to raise money. Everyone wanted to hear the greatest callers compete, and the only way to do this was to attend a contest.”

As they met and talked at contests, many of the early competitors forged strong friendships. Ernie Calandrelli, public relations director for Quaker Boy, called in contests for about 11 years in the 1970s and ’80s, remembers participants would travel, eat and even room together at competitions. They’d make calls for each other and exchange information, even though they knew their fellow callers wanted to beat them.

“Of course, we all got educations — the early audiences and the early participants in the contests,” he said. “I remember back then, you drove hundreds and hundreds of miles just to win a trophy.”

At the time, many callers probably didn’t realize they were planting the seeds for careers in the hunting business. Calling competitions served as a springboard for some of the most recognizable personalities in the industry. Calandrelli experienced that firsthand with his calling buddy and future boss, Dick Kirby.

“I used to ride with him,” he said. “He’d pay for everything: gas and food. As soon as the contest was over, we’d open his trunk and sell all the calls in the trunk, which made up for it.”

Many champions, such as Kirby and Pittman, founded call companies that still exist. Others became television and video personalities or served as spokespeople for top manufacturers. All the while, their calling exploits and instruction helped fuel the fire for America’s turkey hunting boom.

“Calling contest guys would win championships, and they’d give promotions in stores and seminars, and travel the country and talk to people,” Eye said. “They were always promoting turkey hunting and turkey calling. Many of them are still promoting and spreading the word of turkey hunting safety, ethics and the outdoors.”

All the callers said contests remain great instructional venues, even though modern hunters have so many educational resources for turkey calling, including sound files, YouTube videos and others.

“What is any better than being able to visit with somebody who’s already been there and already done that, and be able to shoot the bull with them and pick their brains?” Pittman asked.

Stoltz agreed, saying the experience of attending a calling contest can’t be replicated on a smartphone or computer screen.

“Hopefully, even with today’s digital world, where information is at your fingertips, the popularity of calling contests will ramp back up,” Stoltz said. “To me, there is no better way to learn than by actually being there. It’s like a Major League Baseball game. You can watch it on TV or listen to it on the radio, but there is nothing better than actually going to the game.” 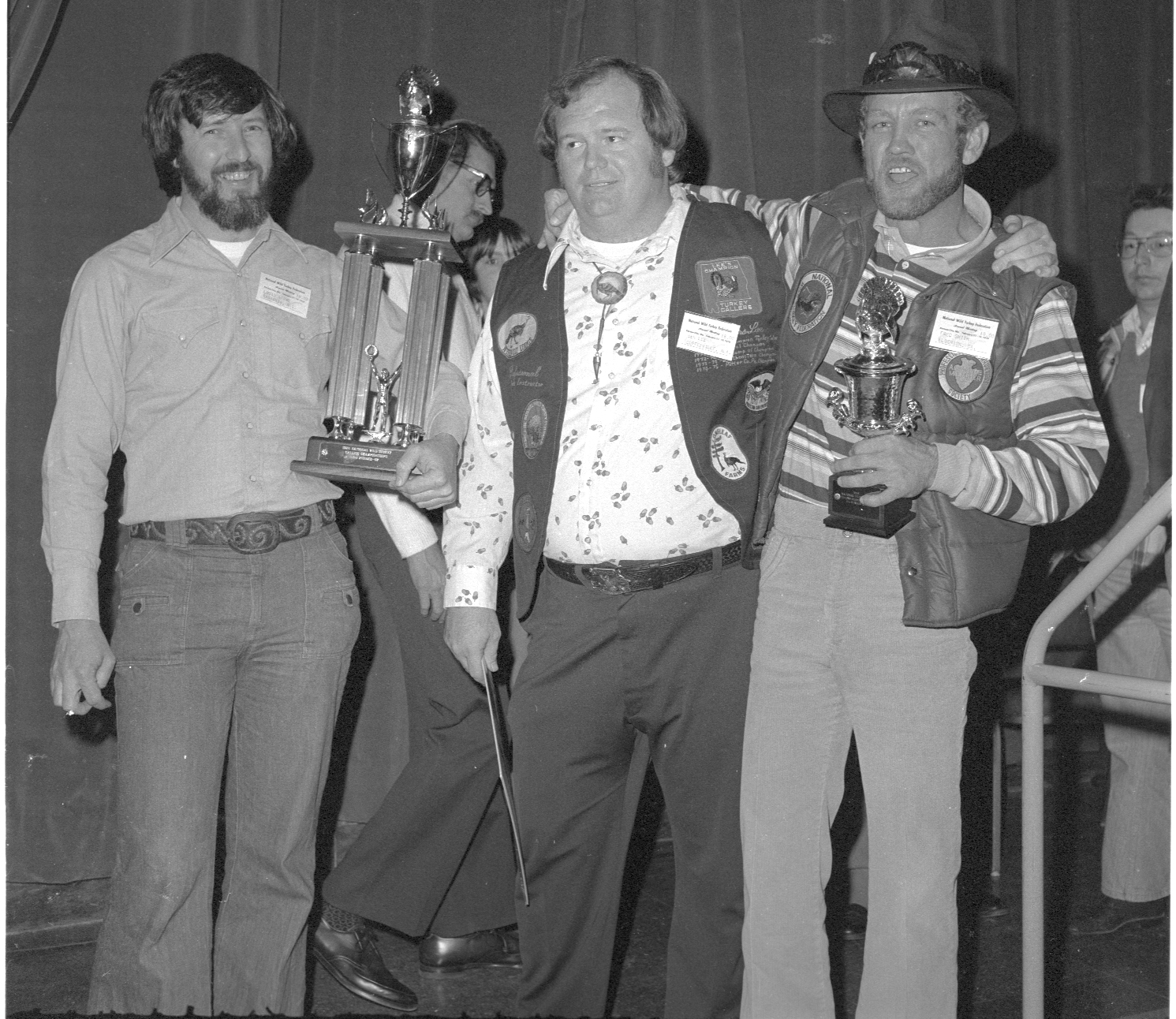 A new bird is making headlines in Stuttgart, Arkansas.

Every March, many of the country’s top turkey callers converge on Mack’s Prairie Wings in Stuttgart, the self-proclaimed rice and duck capital of the world, for the World Championship Turkey Calling Contest, a high-stakes calling competition with a rich history. Widely acknowledged as the “other” major calling contest, the World Championship remains a vital, exciting showcase for turkey calling.

“I think it’s worth the trip for anyone to come down just to see everybody and visit,” said Jim Wells, who has organized the World contest since 2013 as a board member for the Arkansas NWTF State Chapter. “It’s almost like a celebration of turkey calling before the season.”

The World contest was started in 1940 by the Mobile (Alabama) County Sportsmen’s Association (now the Mobile County Wildlife and Conservation Association), according to the group’s website.

“More than 200 sportsmen gathered at the Battle House to watch some of the area’s most well-known sportsmen and turkey callers imitate the elusive Eastern wild turkey,” the site said. “The event was so successful that it became an annual happening.”

From those beginnings, the World grew into a major turkey calling event, annually attracting top callers and auditoriums full of spectators, and launching the careers of many calling and hunting legends. A list of the contest’s winners reads like a who’s-who in turkey-industry history. All-time-great caller Matt Van Cise has won seven World titles, topping the record held by the legendary Ben Lee, who took five championships.

“The Worlds are held in a much more intimate venue than the Grand Nationals, and spectators are on top of the action,” said Matt Lindler, NWTF acting vice president of communications and Turkey Country editor. “The calling is top-notch and being that close to the world’s best turkey callers, you can really pick up on the nuances of their calling, which adds to your arsenal in the turkey woods. Like the Grand Nationals, it’s definitely a contest you should attend.”