Turkey Hunting and the Psalm of Life

It’s impossible to measure what one surrenders in one life for the chance to seize another. A pallor laid over my house with the passing of my mother in the summer of 2016. A three-year fight with lung cancer carried her away. The anguish compounded that autumn when my daughter Sydney, a standout goalie on her soccer team, injured herself in training diving for a ball. She had to do the otherwise unthinkable and sit out.

The days peeled off the calendar; days turned to weeks. And during that time, Sydney cracked open a copy of her JAKES COUNTRY magazine, published by the NWTF. She saw the call for youth-authored essays on conservation with a chance to win an all-expense-paid guided turkey hunt in Kansas, and a trip to the NWTF’s annual Convention and Sport Show in Nashville.

Her reaction to the opportunity was tepid, quite frankly, feeling down over her injury and the loss of her grandma Betty. There was nothing I could do to motivate her. It was painful to sit back and watch; I felt helpless. Sydney and I talked a great deal about her grandma and about those things in life that we are dealt not of our own choosing. As the essay contest deadline loomed, Sydney had a change of heart and put pen to paper.

She crafted an essay on her hunting heritage: what hunting means to her and what she’ll do to promote hunting in the future. Sydney penned, “Most people will tell you that hunting is about getting the experience of it and learning life lessons like respect, responsibility, maturity, humility and spirituality.”  Sydney mused on how hunting is a conservation tool and how the experience draws her into nature. She hit the “send” button, and we waited to hear back from NWTF. And waited. And waited some more.

Six weeks passed and then came the phone call. The NWTF chose Sydney as the 2017 JAKES Essay Contest winner. She earned a spot in the annual Kansas Governor’s One Shot Turkey Hunt. The first breath of spring in the Southwest turned into a whirlwind of traveling and planning.

Amid the flock of 50,000-plus attendees at the NWTF convention in February, the NWTF presented Sydney her award and invitation to Kansas. April took us to El Dorado, Kansas, to hunt. Guide Melinda Duff had hunted turkey for many years and was eager to mentor a young girl who shared a passion for hunting and conservation. 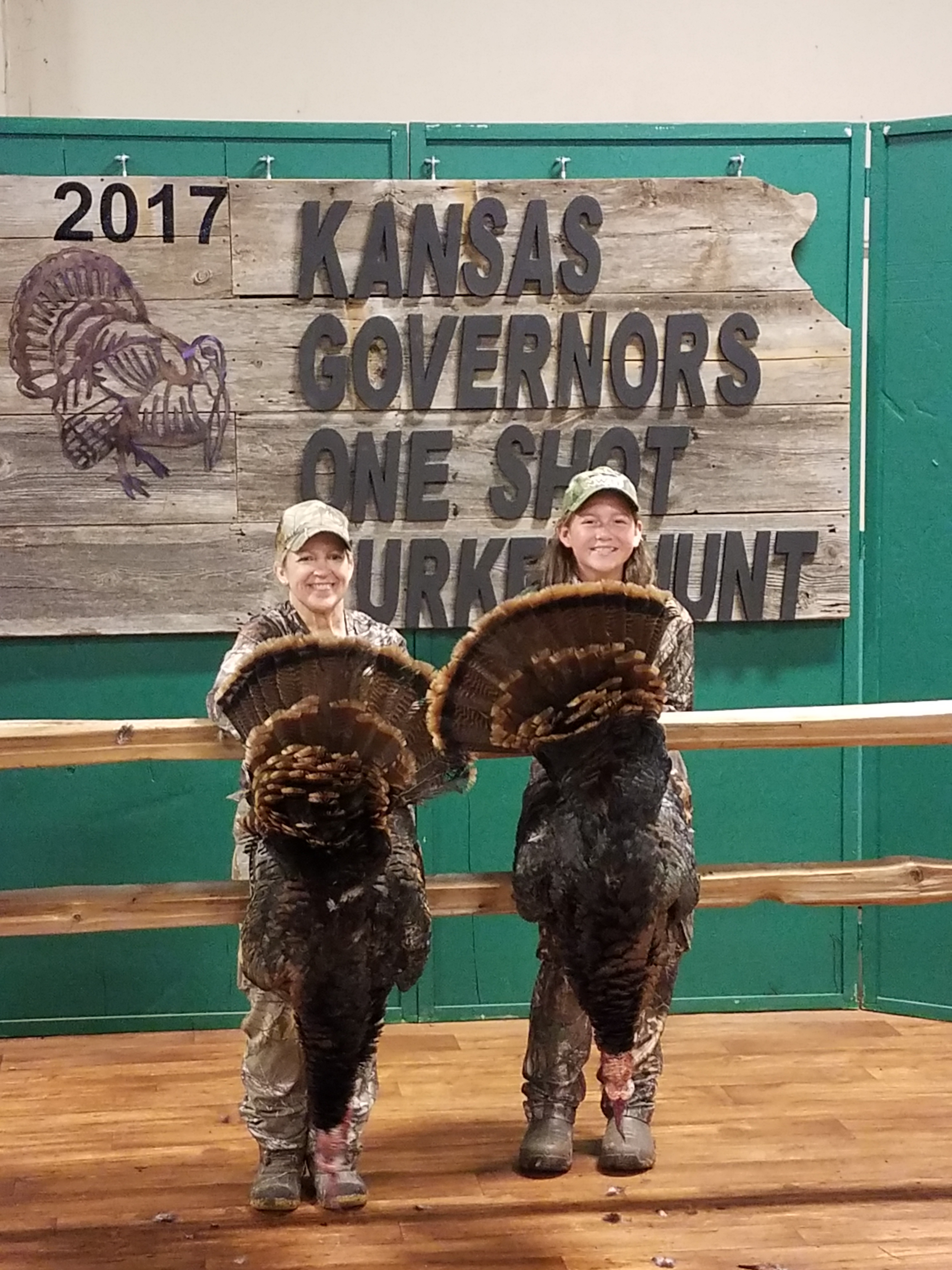 Day One, at 6 a.m., birds fired off the roost. In short order, 30 turkeys milled 400 yards from our blind. Toms strutted, gobbled and chased jakes; hens ran off other hens, vying for social order in the flock. At one point, 10 mature toms in full strut were in view while a hen attacked a decoy outside our blind. By 8 a.m., we witnessed more turkeys and turkey behavior than in four years of turkey hunting in Arizona.

But harvest would have to wait for Day Two. Through a driving rain, we heard the first gobbles in a faint growing light at sunrise. Outside the blind, four strutters and several hens appeared. Melinda started with her slate call and turned two strutters our way, waddling wing-to-wing. They never gobbled and never broke strut and came closer with each call. Adrenalin pulsed through our veins.

Sydney shouldered her gun. “They’re right there. Can I shoot?” she asked in hushed excitement.

A mere 10 minutes later, we had birds gobbling around us again. The guide called and two toms turned toward us from a tree line. She concentrated on those birds to entice them to us. To our surprise, a big tom had blindly approached us, and Sydney took a hard shot and killed the bird.

As if having two big toms down on a youth’s first hunt wasn’t grand enough, her first bird sported a double beard. Ardent hunters wait a lifetime for that. The tom weighed 20 pounds, had 1 7/8-inch spurs, and beards measuring 10 2/8 and 6 5/8 inches. Sydney entered her bird into the Kansas trophy book. 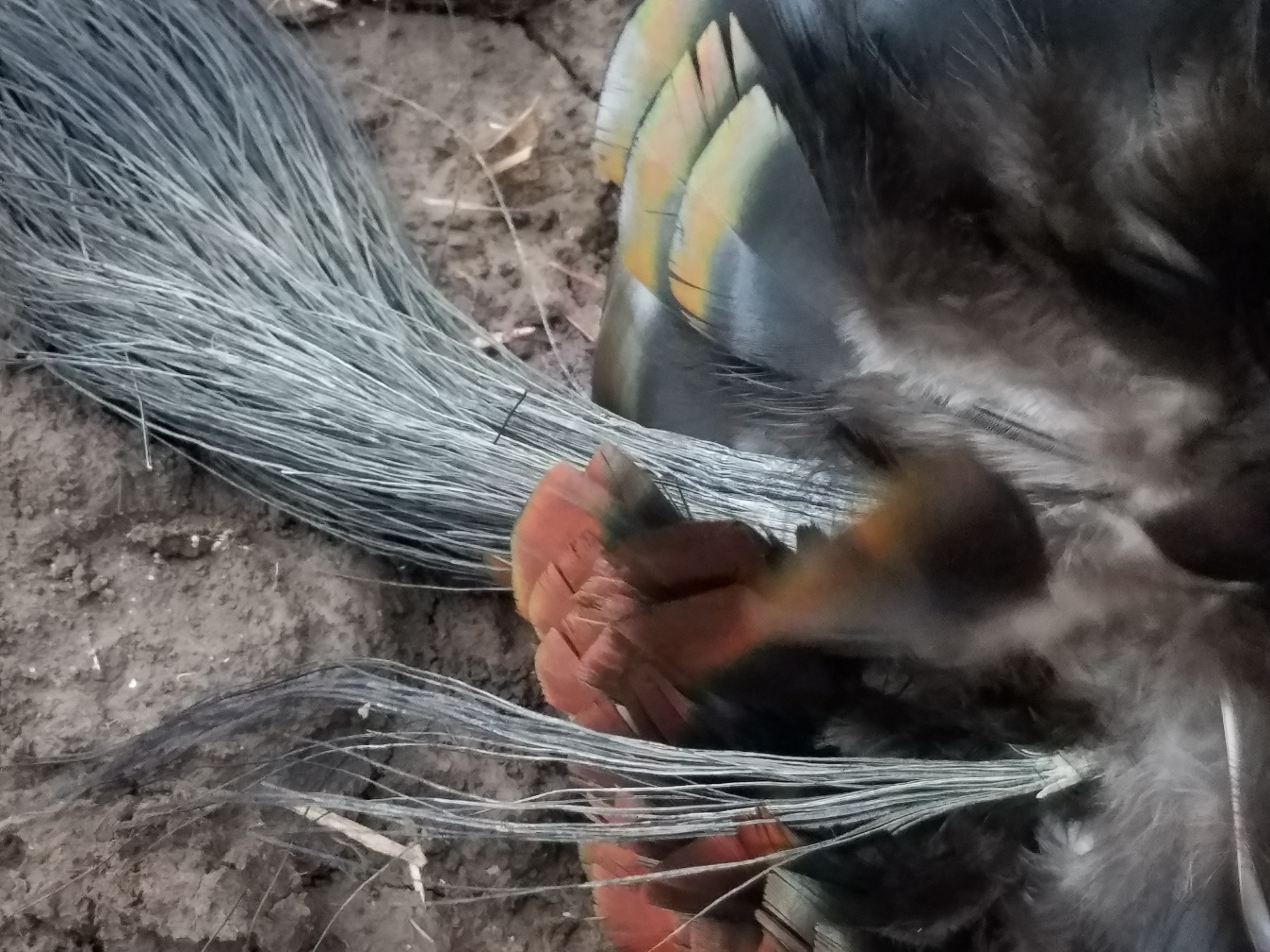 It’s a long drive from El Dorado, Kansas, to Flagstaff, Arizona. We relived our two days afield and recounted how the birds behaved and what we learned from the experiences. We chatted about how we would prepare the organic meat for the table. Grandma Betty valued education and instilled that in her children and grandchildren. Her granddaughter crafted a cogent, heart-felt essay on conservation. Grandma would appreciate the endeavor and the outcome. My daughter persevered through difficulty.

The coda to Longfellow’s “A Psalm of Life” fits here. “Let us, then, be up and doing / With a heart for any fate / Still achieving, still pursuing / Learn to labor and to wait.”

One can surrender to mournful looks to the past or plow ahead with a vision for the long horizon. To my mind, that’s a trait common among hunters and certainly among conservationists.