Turkey Hunting Success at Land Between the Lakes, Kentucky

Just returning from a two-day public land turkey hunt with my colleagues from the Association of Great Lakes Outdoor Writers (AGLOW) in Kentucky gave me an entire new outlook on hunting spring turkeys.  Our destination for this trip was Land Between the Lakes in Kentucky near the world class fishery, Kentucky Lake.

As much of the U.S. has experienced, Kentucky has seen an unusual spring with cold temperatures hanging on.  Snow was even spitting from the sky as I made the drive from my home in Central Illinois to Kentucky.  That is not something you often see hunting turkeys in Kentucky during the spring.

Arriving at our destination, plans were laid out that evening for the following days hunt.  I would be paired with a local turkey hunter Wade Smith.  Joining us would be Catelyn Folkert. Digital Media Specialist with the NWTF.  Wade had been scouting the area prior to our arrival and had a good idea where the birds were roosting.  Now, it was just a matter of getting the birds to cooperate.

Arriving before dawn on our first morning, we set up on a ridge to begin listening for gobbles to break the silence from the treetops.  It wasn’t long before we heard a gobble in the distance.  And then another rang out from another direction, and then another.  We were surrounded by gobblers, and we quickly decided to head two ridges over where two gobblers were actively talking to one another.

Sneaking in undetected, Catelyn and I set up against two trees using our Nomad clothing in Mossy Oak Obsession to blend in with our surroundings.  Wade moved further back to begin calling.  He chose to use a Flextone glass call, the Show Stopper.  This call allowed him to quickly go from soft to loud calls as the situation dictated.  He knew the gobblers were henned up and it would be necessary to change his calling to match the mood of the longbeards.

It wasn’t long before we heard the obvious sounds of birds flying from the roost, and our hopes were high it would just be a matter of minutes before a tom was within range.  That proved to be a little difficult.

The toms responded good to the calls when they first hit the ground, and a couple even began working their way towards us.  Then it happened.  The gobblers were intercepted by the real thing.  I don’t care how good of a turkey hunter you are, or how good your equipment is, you can’t compete with a live hen standing in front of a longbeard looking for love.

The rest of the day was a lot of running and gunning, but the birds were not vocal once they got with the hens.  We would occasionally hear a gobble in the distance, but they would not commit to coming in to our calls or decoys.  Talking with other hunters we encountered throughout the day, we soon realized it wasn’t just us that was experiencing difficult scenarios. 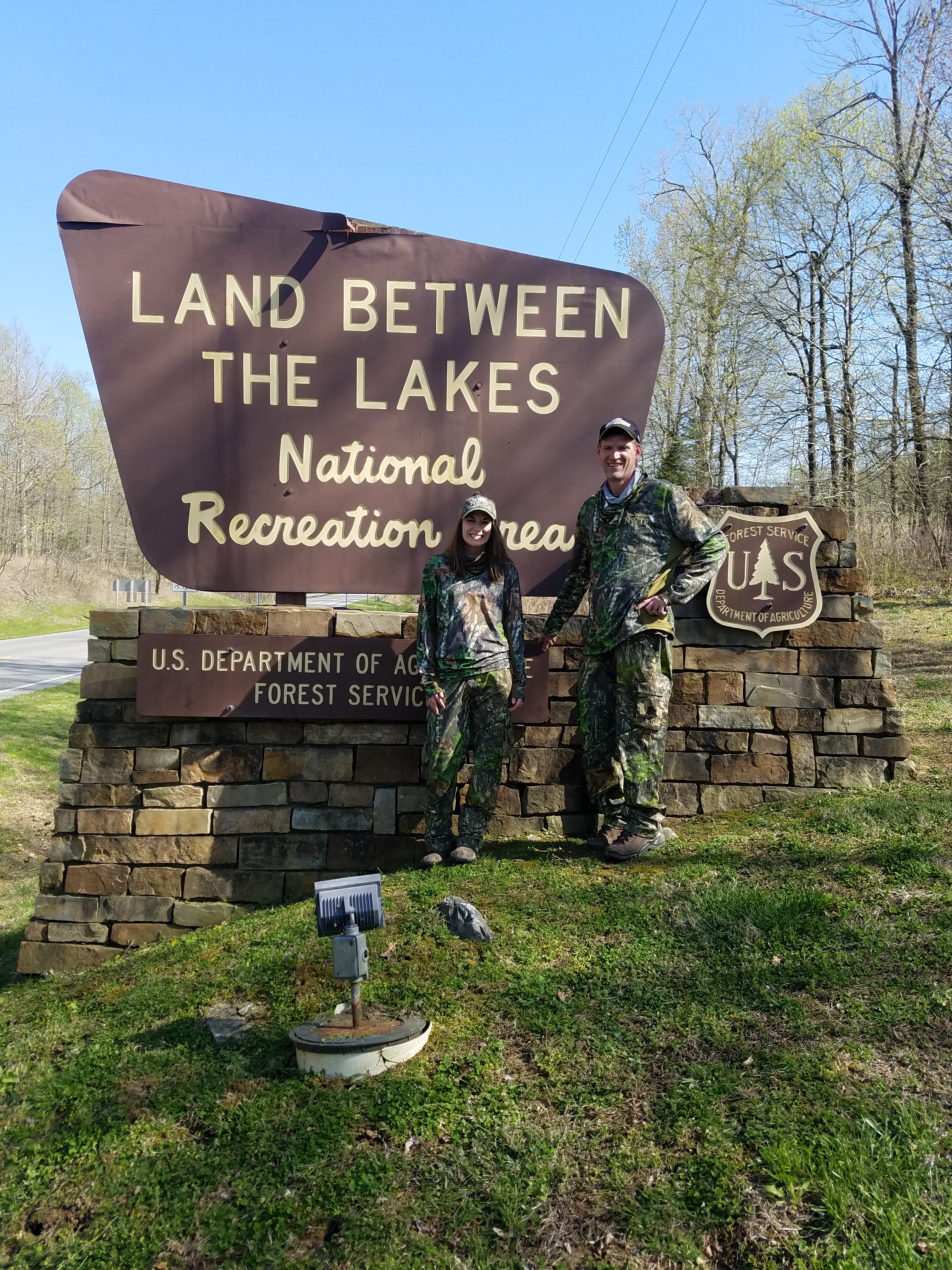 The terrain located in and around Land Between the Lakes is hilly to say the least.  If you plan on doing a lot of walking I suggest you invest in a comfortable pair of boots.  On this hunt I was using a pair of Renegade’s by LOWA.  The best thing about these boots is how comfortable and light they are.  Get yourself a pair of good boots that will last for years, your feet will thank you for it.

The day ended with a lot of walking, seeing a few birds, and memories that will be with us forever.  After supper that night we hashed out the plans for the following day, the last day of the hunt.

Catelyn was paired with another hunter on the second day.  Replacing her was Jeff Helsdon, Turkey Editor for Ontario Out of Doors.

Day two started out much like the first day.  Birds gobbled good from the roost but after flying down they got lock-jaw as they moved off with hens.

Knowing we needed to do something different, we made a plan for me to sit on the edge of a field, while Jeff and Wade did some running and gunning.  We hoped this would increase our odds of success.

I set out a hen and jake decoy from Avian-X.  There are a lot of good decoys on the market, but these decoys are about as lifelike as any decoy I have ever used.  The wind was howling at sustained speeds of 25 mph with gusts over 30 mph.  My plan was to sit there the rest of the day if required.  I knew that it might take a while for a bird to respond to my calling, especially in these windy conditions.  And, I would never hear a gobbler respond to my call, so getting up would only ruin my chances as success.

I wanted to use a call that had some rasp to it, and that would carry good through the wind.  I began using my Wicked box call from Zink.  This call produces sounds that are unmatched by any box call I have ever used.

After a couple of hours of battling the high winds and not being able to hear if a gobbler was even responding to my calls, my patience was draining.  Then as I was just thinking about putting plan B into action I caught movement out of the corner of my eye.

Slowly moving my head, I spotted a gobbler step out of the fencerow only 8 yards away.  Then another gobbler stepped out, then another, eight in total.  Spotting my decoys, they picked up their pace to reach them.  Some made it to the decoys, but not all of them.

Using a PSE Fang LT crossbow, I was going to need a perfect broadside shot at hopefully a bird that wasn’t strutting.  The last gobbler inline kept his composure and never went into a strut.  Lining up my top crosshair of the Hawke scope that topped the crossbow, I let a Bloodsport Witness bolt fly.  With a loud thud, the Gravedigger broadhead by Bloodsport hit home.  With a couple flops from the gobbler, my tag was filled. 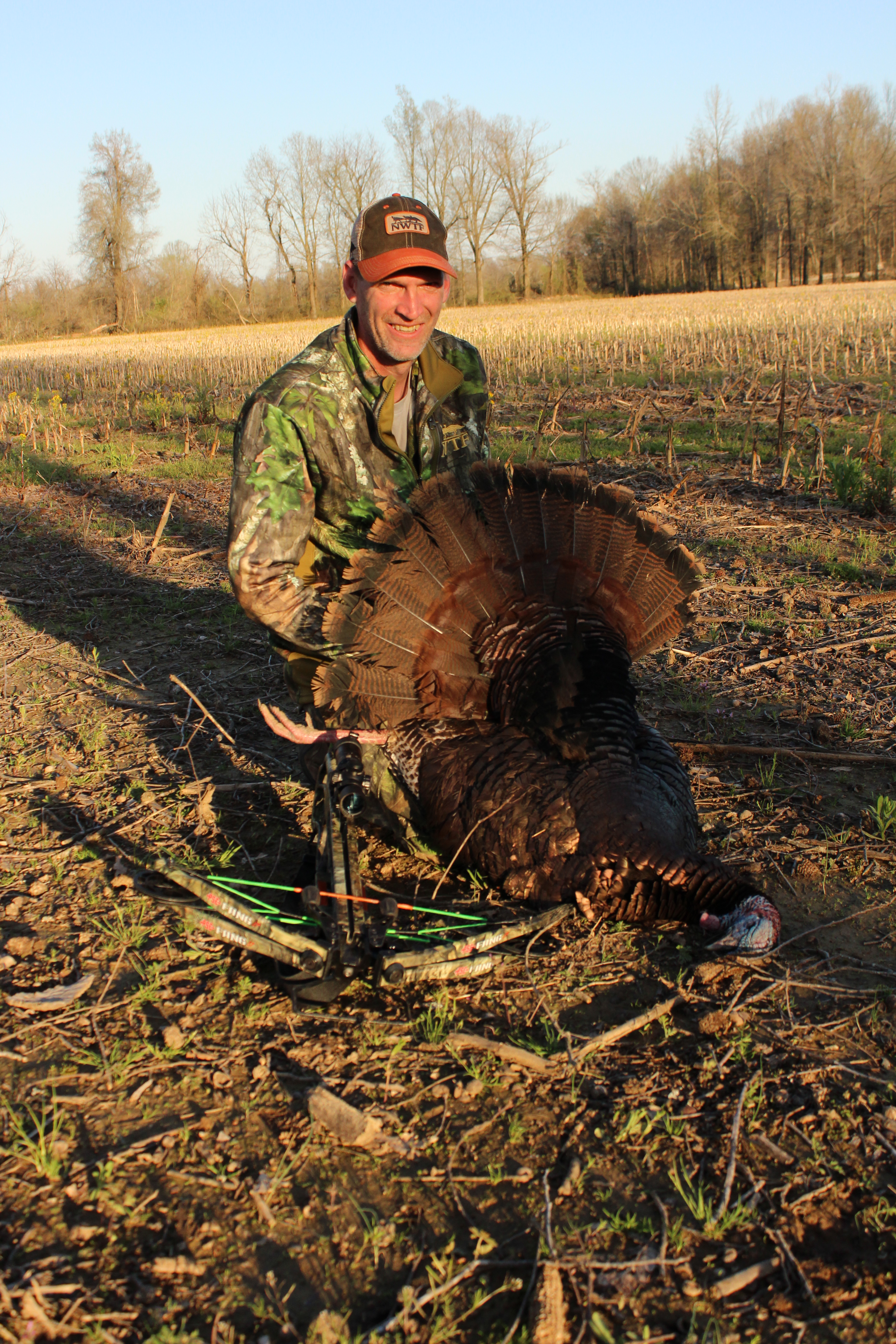 I had never killed or even hunted a wild turkey with a crossbow.  The odds were obviously not going to be in my favor, but somehow, I was able to coax a bird to within range and deliver a perfect shot that quickly put the bird on the ground.  The level of excitement that flooded my body is unexplainable.

The bird weighed in at 19-pounds with a 9-inch beard and 1-inch spurs and fit nicely in my Tenzing turkey pack.  There are a lot of gobblers bigger than him running the ridges of Land Between the Lakes, but this bird is a trophy in my eyes.   Hunting public land gobblers can be tough on good days.  When you have high winds and gobblers that are henned up, turkey hunting can be frustrating.  This is where having the right gear for the job, scouting, a little patience and a lot of luck comes into play.  Thankfully we had all of that on our side.

As I was packing to leave from Kentucky, Susie Han, Marketing Coordinator for Honda’s ATVs and side-by-sides and her hunting partner Jeremy came in with Susie's very first turkey ever.  Seeing the smile on a successful hunter's face is what hunting is all about. 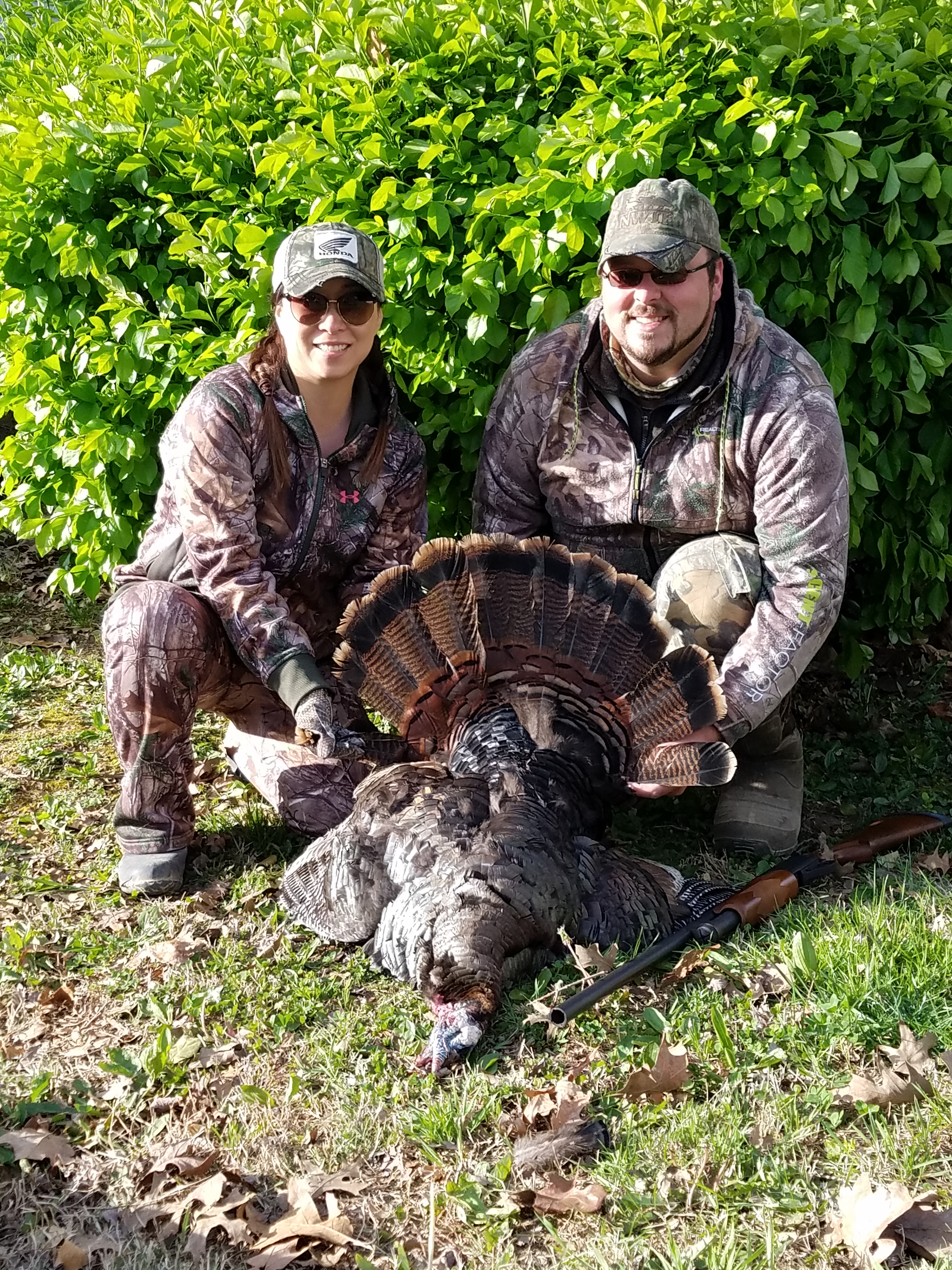