“Practice does not make perfect, only perfect practice makes perfect.” -Vince Lombardi.  Not to get too cliché right out of the gate, but Vince was right. I call it the “Three P’s”. Prepare, Pattern and Practice.

Some say it’s impossible to miss with a shotgun. Misses happen; but like lots of things, a little preparation goes a long way.

I got bit by the turkey bug thanks to my friend Richie Phillips. Back in the mid 90’s, any chance to go hunting was a blessing, and to go down to Frio County in South Texas was like hitting the lotto for a broke college kid hungry to kill his first bird.

We went to the local sporting goods store and bought some three-inch number 6s, loaded up our 870s and drove south from College Station to Pearsall, Texas with a cooler full of beer, a change of clothes and enough fajitas to feed a platoon.

We never considered patterning a shotgun or buying a turkey choke. Did a full choke and #6s work? Absolutely. Dang near anything will work at 10 to 15 steps; we both killed birds.

But, what about that gobbler that hangs up at 45 to 50 steps, or even farther?  Now what? 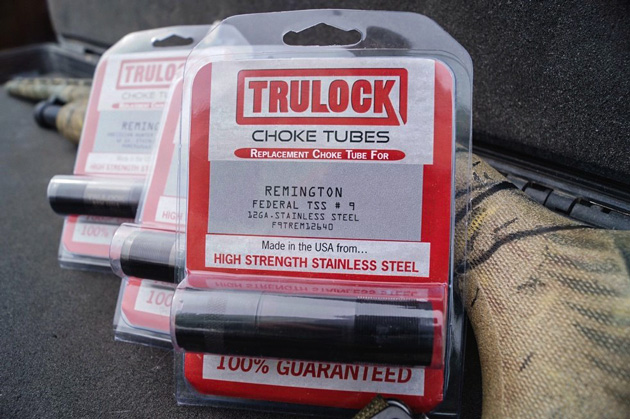 In fact, Tungsten Super Shot or TSS is slowly becoming the gold standard –tungsten’s density is nearly identical to gold– as tungsten is nearly twice as dense as lead and five times harder than steel. 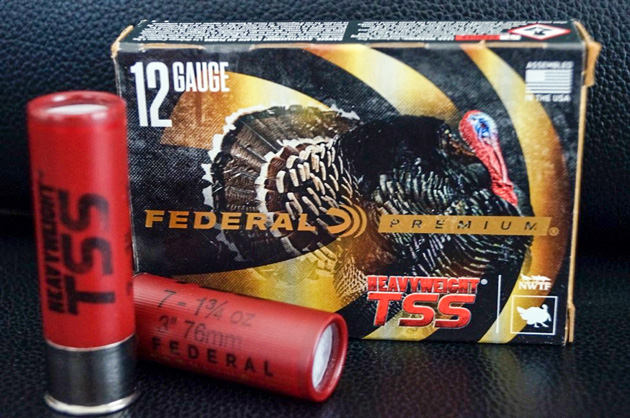 My buddy Jody told me about a bird he shot “stone dead” at 76 steps with 20 gauge #9 TSS. He admittedly misjudged the distance and thought the bird was closer, but he had my attention.

When I decided to make the move to TSS for spring gobblers, I reached out to my friend George Trulock with Trulock Choke Tubes. He has been in the business of making chokes for a while now, and he helped get me set up with TSS specific chokes for all of my turkey shotguns – Trulock makes chokes designed to shoot specific loads, not just the size of the shot but also by manufacturer.

If you are ever at an event and get to sit down and talk turkey hunting and shot patterns with George, you are in for a treat. I enjoy my conversations with him greatly as the man is a rocket scientist in the world of choke tubes and also a true gentleman.

I decided to pattern TSS through my venerable Remington 870 with a 20-inch barrel (the same one I used in 93’) and my Benelli M2 with a 22-inch barrel.

The industry standard for patterning a shotgun is 40 yards, and the hit percentage is determined by how many pellets you get inside of a 30-inch circle versus how many pellets are in the shotshell. So, if you have 230 pellets in a shell and get 184 in the circle that’s 80 percent. This also allows for you to see if you have any dead space, strays and to see if your point of aim and point of impact are the same.

I bore sighted my optics at about 10-15 yards using 2 ¾” bird shot as there is no use burning up expensive turkey loads on this step. This got me on paper and then I fine-tuned from there. 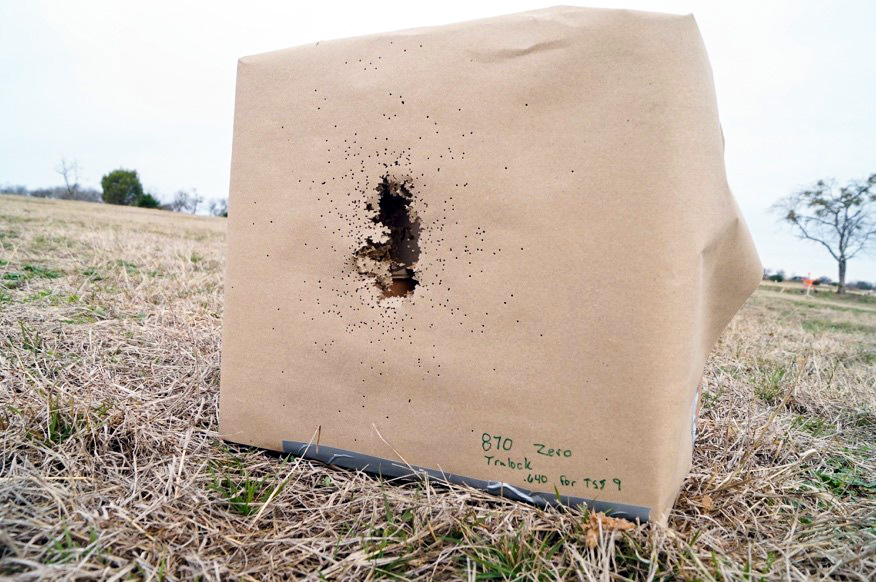 Three shots in the same hole for 15 yard zero.  Note how tight the pattern is.

Let’s get into the performance of the ammo and the gun/choke combination.

I used a 12-inch circular splatter target mounted on a four foot by foot paper backing and set it at 40 and 60 yards as I wanted to see what the shot cone would look like at 40 yards and beyond. And, the results were quite impressive. 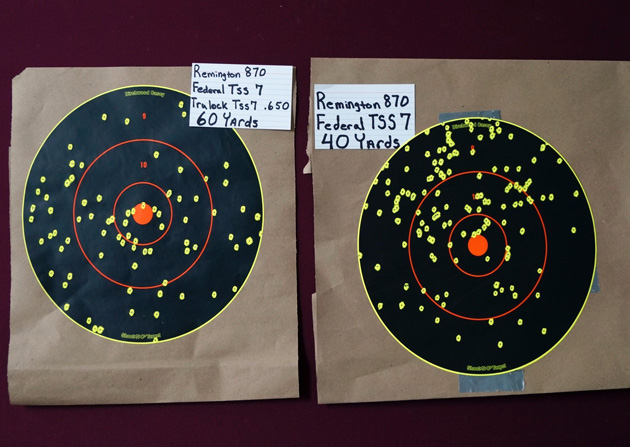 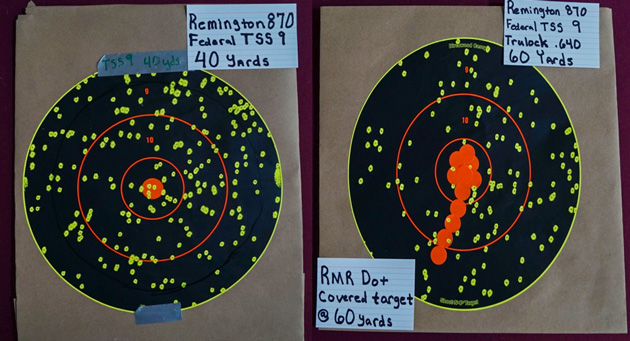 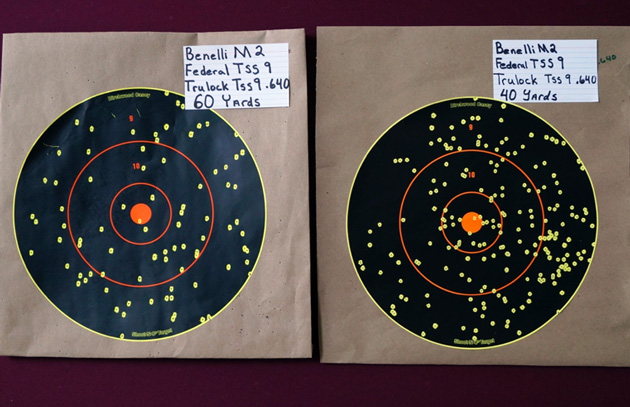 Personally, I like to get birds close but I practice at the extended distances so I know how my pattern will look in case the bird doesn’t cooperate. 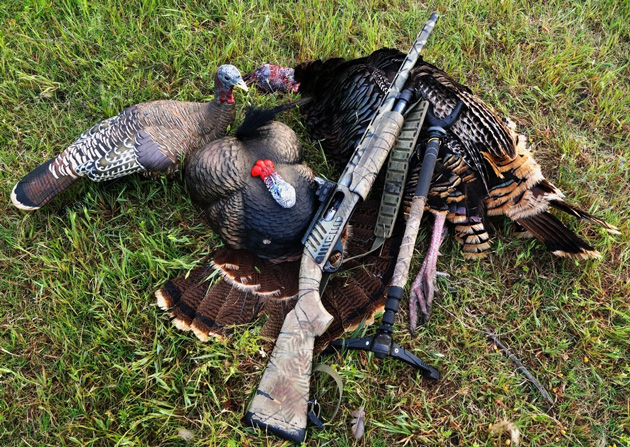 This Rio fell at 51 paces from the 870 and TSS9/Trulock combo during a tough Spring 19’ season.

Shooting off of a sled is great for patterning but recreating a hunting scenario will help you identify strengths and weaknesses. If you shoot from a seat with a monopod (pictured) then practice that shot, if off a knee then practice it as well.

Regardless of your ammo, choke or gun choice, do yourself and the birds a favor – prepare, pattern and practice. 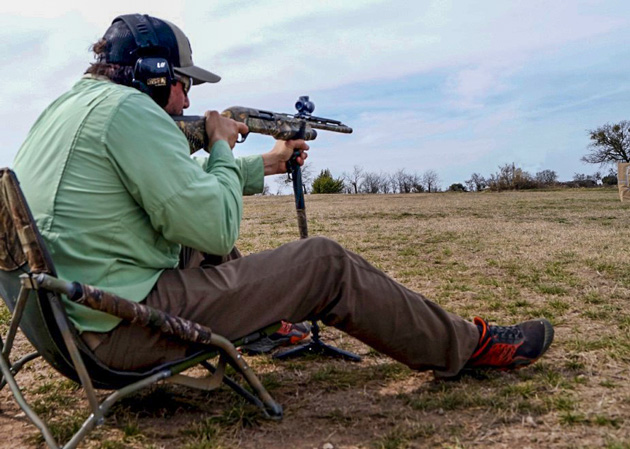