The story of how a small hunting camp led to big things for the wild turkey.

This story begins — as good stories often do — with a spring turkey hunt in South Dakota’s Black Hills.

On an April morning in 1974, there were three of us in the predawn darkness quietly walking atop a ridge of Ponderosa pines. Our destination was to get close to the source of a gobble heard the night before. Little did we realize, or even imagine back then, that our turkey hunt would become a historic moment in the annals of wild turkey conservation.

The short version goes like this: When the morning hunt was over 45 years ago, it was the unplanned beginning of a hunting camp called the Turkey Track Club located in the Black Hills near Piedmont, South Dakota. Those hunters who came to Turkey Track Club were primarily Minnesotans. After experiencing the pursuit of wild turkeys, they returned home inspired to improve turkey populations in Minnesota and someday have a hunting season. (At the time, Minnesota had a struggling turkey population and no hunting season.)

In addition, it was their turkey hunting experience at Turkey Track Club that lead to the creation of two first-ever NWTF chapters in two states — Minnesota and South Dakota. Rather amazing, yes. If anything, this story once again proves the magnetism of the wild turkey and how the bird can turn strangers into lifelong friends. That’s how I met a South Dakotan named John Hauer. And this is where this story really begins …

A PLAN COMES TOGETHER 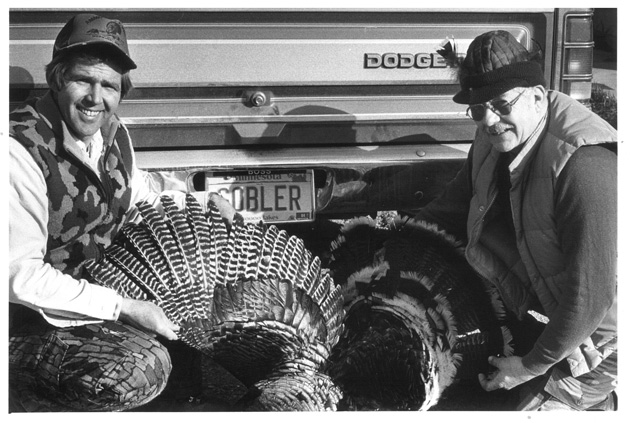 Hauer and I were both turkey nuts, but we didn’t know each other. I was writing outdoor columns for the Minneapolis Tribune, and he was president of a business college in Rapid City who read my Black Hills turkey yarns in the newspaper. One day he sent a letter inviting me to a spring hunt on his ranch. I accepted, and we immediately clicked as friends and turkey nuts. We actually thought we were pretty awesome at calling gobblers and began to offer our turkey guiding services free. A couple of Hauer’s friends turned us down when we said we’d start at 3 a.m.

In the meantime, I was sharing my Black Hills turkey hunting exploits in the newspaper back in Minnesota. Finally, one friend, Bobby Nybo, agreed to fly to Rapid City and try this thing called turkey hunting.

On that April morning ‘74, we picked up Nybo at the Covered Wagon motel in Piedmont, South Dakota. This was his first visit to the Black Hills and first turkey hunt. However, having landed the night before at the Rapid City airport, Nybo had yet to actually see the Hills in daylight as we walked a ridge in darkness.

Still before dawn, we propped him against a Ponderosa pine and pointed in the general direction of the gobbler’s roost. Soon, the first gobble of the day echoed off the ridge. Then, more gobbles. Hauer and I answered with sweet yelps as the eastern sky brightened and bird life came alive in the Hills. I have long forgotten all the details, but I do know the gobbler flew to the ground and walked into shotgun range. Nybo took aim, and the hunt was over. But not really. As he kneeled alongside a Merriam’s gobbler admiring its beauty, for the first time he could see the beauty of the Black Hills for miles from the high ridge.

For the Turkey Track Club, the rest is history. The next spring, Nybo returned, and 15 more Minnesotans came to Turkey Camp for a taste of turkey hunting, something none of them had ever done. To accommodate the hunters, the Covered Wagon motel agreed to provide meals and rooms and set up a makeshift lodge atmosphere. To take everybody hunting, Hauer and I recruited a few local turkey hunters we knew to act as guides. We created a three-day hunt package spread over four days, comprised of three mornings and three afternoons of hunting. 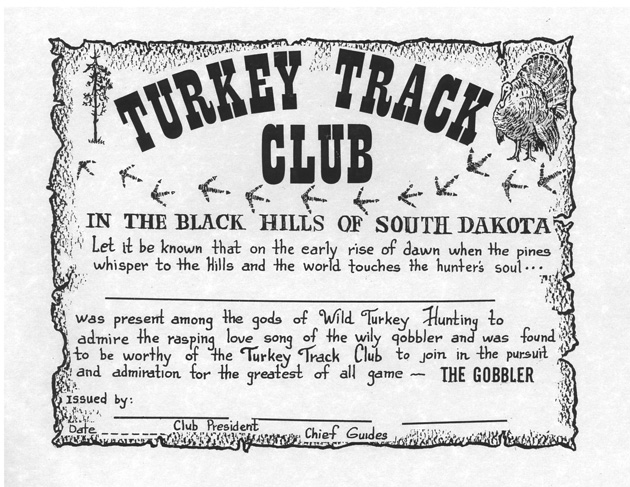 From the very beginning, we practiced fair chase and emphasized following the state’s hunting laws.    South Dakota turkey regulations allowed for the use of high-powered rifles to kill a turkey. We did not.     Shotguns or archery only was the rule at Turkey Track Club. Why? We wanted our club members to experience the thrill of a gobbler coming to the call. That doesn’t happen if you whack a gobbler at 100 yards with a deer rifle.

Hauer and I chose the name Turkey Track Club because we believed turkey hunters were a unique fraternity, a “club’’ so to speak. When you share rising long before dawn, when the wind whispers in the Hills, when you’re hunkering along in a dark woods, trudging up and down rugged terrain, when you stalk the grandest of all game — the gobbler — well, welcome to the “club.’’

I also had learned long ago that a relationship with the wild turkey is extremely contagious. As a young writer fresh out of journalism at Iowa State University, my first job in 1966 was with the South Dakota Department of Game, Fish and Parks. In the spring of 1967, I was introduced to turkey hunting by the department’s deer and turkey biologist, Art Richardson. On that morning, I heard my first turkey gobble, saw my first wild turkey and killed my first gobbler, a jake. Later, in 1968, I was now the outdoor columnist for the Minneapolis Tribune, but I never missed a Black Hills spring turkey season for 50 years.

This may explain why Turkey Track Club gave birth to the first NWTF chapter in Minnesota. It happened like this in 1977. Club members returned to Minnesota enthusiastic about restoring turkeys in their home state. I was already an NWTF member. So, I called a meeting of a few Club members. We gathered at Nybo’s restaurant on a winter evening in Red Wing, Minnesota. When the meeting ended, we created the first NWTF chapter, and I was elected its first president.

First up, a fundraising banquet in the Twin Cities. Minnesota had never held a turkey season, and most Minnesotans were unaware of the joys of turkey hunting. It didn’t matter. That first banquet was a huge success, raising more than $10,000, an NWTF record at the time. Our guest speaker was Ben Rodgers Lee, a giant of a man and an Alabama turkey hunting celebrity. The next year, 1978, a young personable turkey calling expert, Rob Keck, was our guest speaker. He who would go on to become CEO of the NWTF.

Our chapter goal was simple. Restore turkeys and turkey hunting in Minnesota. I remember a conversation with Minnesota’s DNR chief of wildlife, the late Roger Holmes, when I urged him to do more to increase wild turkey populations. He said his wildlife budget was already spread too thin.

“If you want more turkeys, you raise the money,’’ he replied.

So we did. With the money we raised in banquets, the first NWTF chapter became a major donor    to pay for DNR’s trap and transplant crew to move wild birds into new habitat. In its first six years, the one and only NWTF chapter in Minnesota donated $30,000 to DNR’s trap and transplant operations.   Some chapter money also was used to purchase food plots back in a time when we thought turkeys needed food plots in the winter season. When DNR’s turkey restoration efforts ended years later, local NWTF chapters had contributed nearly $500,000 to move birds and fill the state’s abundant turkey habitat. 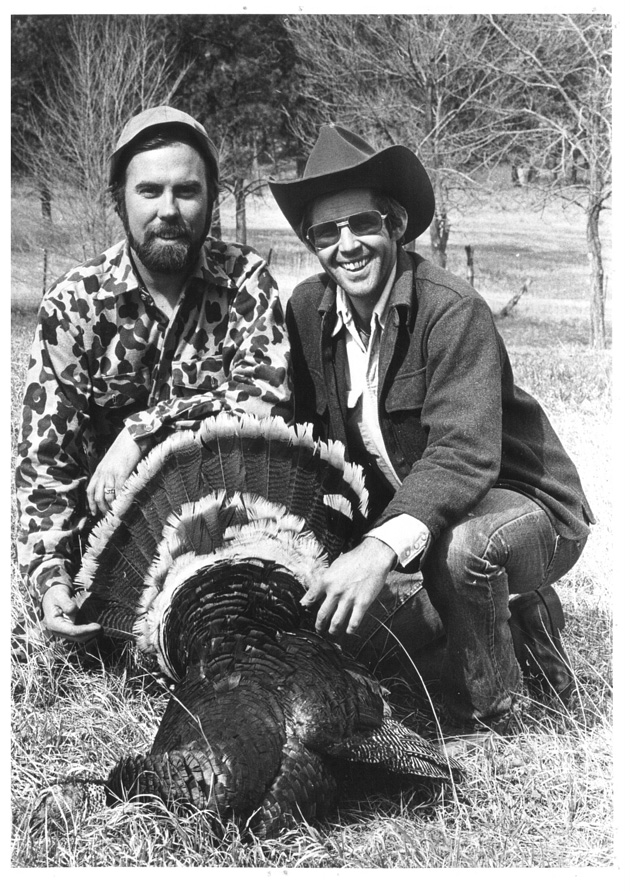 Today, there are 75 Minnesota NWTF chapters with nearly 10,000 members (ninth in the nation).  Together the chapters have donated thousands of dollars to conserve or enhance more than 51,000 acres of turkey habitat to secure the future of wild turkeys and hunting. It’s a modern day conservation success story. Minnesota’s wild turkey population is into the tens of thousands of birds, including areas in the far north as well as the suburbs of Minneapolis-St.Paul.

“The first few local chapters and their contribution to the state’s trap and transplant program are the reason we enjoy the abundance of birds we have today, said Tom Glines, a longtime Minnesota NWTF regional director and current NWTF director of development.

The very first turkey season in Minnesota was held in 1978, and 400 lucky hunters received a license in a DNR drawing. I wasn’t one of them. Those 400 hunters bagged 94 birds. Minnesota turkey hunters now number close to 46,000 and take roughly 6,000 gobblers a season.

Indeed, the future for the wild turkey in Minnesota is secure. But it all started on that April morning in the Black Hills. And after Turkey Track Club members organized the first Minnesota NWTF chapter, the next year we gathered in Rapid City and started the first South Dakota NWTF chapter.

By the way, Turkey Track Club continues. Dating back to 1974, The Club is one of the oldest hunting camps in America and still introducing hunters — young and old — to the beauty of South Dakota’s Black Hills.

Yup, that gobbler is an inspiration that just keeps on giving. 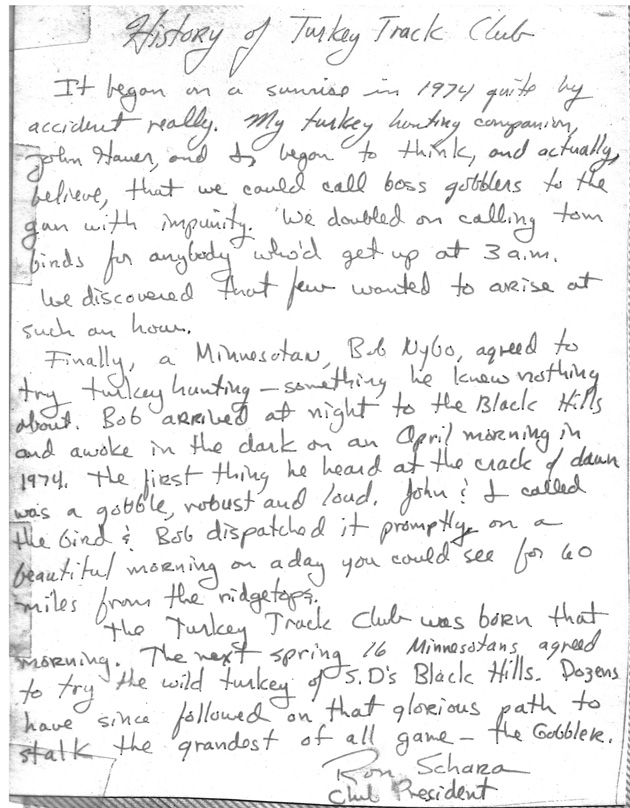