Turkeys and country music; a match made in heaven for Tyler Farr

We knew Tyler was a turkey hunting fanatic, but his story about how his love for the outdoors intertwines with his music career is one in a million to say the least. We caught up with Tyler in late February, just after he welcomed a new child into the family, amidst power outages caused from a rough ice storm that passed through his neck of the woods 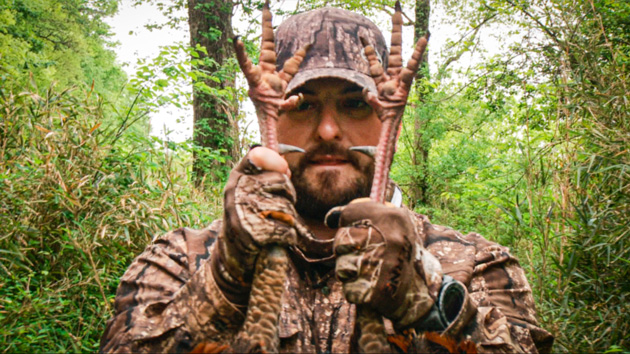 How’s being a father Tyler?

“It’s good. I don’t have a clue what I’m doing [laughs]. It’s pretty remarkable though. There’s no instruction booklet. You basically got to keep them alive until they can survive on their own.”

I’m curious, how has the pandemic impacted you as a touring musician? I’m guessing you’ve had more time to hunt and get outdoors?

“First thing you need to know is every country artist is insecure as far as playing in front of crowds [laughs]. No, but seriously, I’ll tell be. At the first of the year, I signed on with one of my best friends, Jason Aldean, for the label he just started [Night Train Records]. You know, we are best friends ― hunt together, part owners of Buck Commander with the rest of the guys. But we were just launching this new label; he had just started it, and I was the first act he signed. We dropped a single, but with COVID, it just did not work like we wanted it to. It was awful, you know, ‘cause with a single you got to be on the radio and be in front of people.

“It ain’t like back in the day when all you had to do was sell CDs. I enjoy being around people and trying out new songs, and that did not happen in 2020. I think I did a total of nine shows. But to sum it up, people asked me, ‘How are you dealing with this pandemic?’ And I would say, ‘The hell y’all talking about?’ The only thing that’s changed is not getting to do the other thing I love to do, which is singing, and it’s still debatable whether I love turkey hunting or singing more [laughs]. I didn’t realize how bad the pandemic was going to be when it first started. I don’t think anyone did. But when it first started I was like, ‘There ain’t nothing left to do except turkey hunt,’ so that’s what we did all season.”

Not touring as much, did the pandemic give you more time to focus on some projects on your farm?

“Yeah, me and my farm manager really dialed in the dove field. We got to do a lot of the tedious things that we normally wouldn’t have the time to do, from working with my deer tracking dog to raising a baby [laughs].”

What’re the game populations like on your farm? Do you have a lot of turkeys?

“[Laughs] We are loaded. We’re up to about 200 acres situated on the Duck River [in Tennessee]. You know, as well as I know and every other turkey hunter knows: if you got property along a river and you got crops, you are going to have a bunch of wildlife, especially with the Duck River being one of the most speciated rivers in the world, which is why I moved by it. But across the field the other day, I saw about 200 turkeys. Put it this way, I used my A.C. blower as a blind to shoot this gobbler I got on the wall [laughs]. That’s how close I got them to my house. My favorite thing about being out here is just throwing on camo, walking out the back door with a cup of coffee and waiting for a gobble and being like, ‘Alright, lets go after that one.’”

Do you have a fall season in Tennessee?

“We do, but I don’t hunt them. If they aren’t gobbling, I’m not hunting them. I save fall for the deer.”

Tyler, I want to switch gears a little bit and talk about some of your history with music. When you decided to pursue music as a career, was it difficult to balance your love of the outdoors as an aspiring artist?

“To be honest, for me, in a weird way, music and hunting just jived together. When I was up and coming, that’s what country music artists did, but it’s not necessarily like that these days. But to go back when I first started, I first went turkey hunting in high school. One of my buddies got me into it, and he’s a great turkey hunter; he actually came here this last spring with me. But yeah, he just got me addicted to it from that very first time. From that point on, I was like, “Holy crap, this is awesome.’ It was hard though when I first moved to Nashville ‘cause I was in an apartment. I didn’t have the property or the money to hunt.”

What inspired you to  move to Nashville to pursue music? You know? A lot of people have a passion but never act on it. What was your motivation?

“I could always sing good. I went to Missouri State on a classical vocal performance scholarship. But about two years in, I just … I just hated it. My old high school girlfriend had broken up with me, you know, one of those deals. At that point I either wanted to be a conservation agent or a country singer. I basically said, ‘What the hell,’ and just packed my stuff and moved to Nashville.

“I moved there in a foreign, beat-up car with a guitar and a cowboy hat. We’ll fast forward a few years, ‘cause if I told you the whole story you’d be on here for hours.

“I loved it [Nashville], and I learned a lot, but I don’t want to end up being just a bar singer, so I moved back to Missouri and worked at a children’s rehab facility, and around that time is when I met a man named Alex Rutledge, and Alex lives and breaths it. You know, he hunted for a living, and I was like, ‘Holy crap, you can hunt for a living?’ So, I started making hunting connections and started writing hunting songs. I wrote a song called “It’s a Huntin’ Thing.” And I just started writing these songs and going to these events, and Alex got me even more hooked on turkey hunting ‘cause he showed me how the professionals do it. So this whole time in Missouri, I’m in this weird middle space where I don’t know what I want to do. I didn’t want to just keep singing in a bar, ‘cause I wasn’t going anywhere. So I just spent a lot of time hunting. I was better with a bow than I have ever been.

“But Alex was friends with Craig Morgan. He told Craig he thought I had something, and I really do owe a lot to Alex, ‘cause he got a demo of my CD into the hands of Rhett Akins, and so I get a call from Rhett Akins saying, ‘Man I really dig your stuff, and do you plan on coming back to Nashville?’ And I said, ‘Yeah when do you want me to be there?’ So I moved back to Nashville a month later. Keep in mind, when I moved back to Nashville is when I met Phillip Culpepper. He’s one of the best turkey hunters I’ve ever hunted with. He was filming [Michael] Waddell and Realtree Road Trips, and Rhett Akins was best friends with Waddell. You see how all this is connecting? So I end up going hunting with Waddell and Culpepper in Georgia, and by this time I was fully addicted to turkey hunting.”

What was your big break in music?

“Long story short, I was at a golf tournament, and I was a country artist guest, and I ain’t had a hit out yet or nothing, so I didn’t know why they had me as a guest [laughs]. But I was singing a song I wrote called “Camouflage,” and it happened that one of the heads at Sony Records was there, and he was a big hunter. He came up to me after the show and told me he was digging my hunting songs. I didn’t know he was with Sony at this point, but he invites me down to his hunting camp. Fast forward, I end up getting a deal with Sony and he ends up becoming one of my best friends and producing both of my albums.”

Man, that sounds like one in a million, Tyler.

“It all goes back into the outdoors. Eventually I’m touring with Jason Aldean, and guess what he likes to do? Hunt. He [co-]owns Buck Commander. When they asked me to be a part owner of Buck Commander, man, that’s better than getting a number one hit.”

“Music fans might hate me for saying this, but it’s a tossup what I like to do better. I could be perfectly content with just hunting the rest of my damn life [laughs]. Well, I don’t know [laughs], I love singing songs too.”

I know you got your hands full Tyler, so I’ll let you go. I appreciate you talking with us. Any last words?

“If the NWTF ever needs anything, I am here. I got that organization’s back 110%. I love hunting turkeys, so, the NWTF, I will not be unfriending them [laughs]. I also want to thank all the conservationists and agents that protect and keep one of my biggest treasures thriving.”