Outdoor-media types love to write about first turkey hunts, but those stories don’t always translate the experience. The first steps along turkey hunting’s path can be far more involved.

During Winter 2016-17, J.J. Reich — marketing guru for Federal, Primos, Bushnell and Savage/Stevens — proposed an April 2017 turkey hunt with a twist: mentoring a first-time hunter. Brian Lovett would partner with Susan Delk, writer and photographer for the NWTF. Susan hadn’t hunted turkeys before, and the 58,000-acre Clear Fork Ranch in Texas provided the perfect environment to start.

Of course, mentor and first-timer don’t always have the same impressions from a hunt. Here’s a dual account of the Texas adventure.

Brian: Susan and I started in a blind at the edge of a pasture. Distant gobbling greeted us at dawn. I scratched some yelps on a Primos ceramic call and glanced up to see two strutters following several hens toward us.

Susan: They seemed spooked by something near our decoys, and they moved along. More hens stepped out of the brush, with a tom in tow. Although Brian saw the tom, the gobbler never came into my view.

Brian: That afternoon, our guide, Lloyd, spotted a lone gobbler near a river bottom. Susan and I slipped close to a good-looking setup and got ready. When the longbeard cut off my first calling series, we were in business.

“He’s going to come up this road from the left,” I whispered. “Adjust your gun when he goes behind that brush, and take the first good shot when he clears the cover.”

Susan: I still could not see him. I heard him gobble. Wait, he already passed the opening. Of course, why did I expect him to walk right to me? He walked by the opening around another brushy area and was about to walk into a clearing to my right. I tried to make some seating adjustments quietly. Not enough. I realized I’d better get my gun ready.

Brian: Susan performed perfectly, flowing with the turkey, moving her gun into position and locking on target when the turkey stopped and craned his neck.

Susan: I looked down the barrel into the Bushnell red-dot scope, seeking a bobbing head. The wait seemed to take forever. My arms began to shake from the weight of the gun, particularly at the hard right tilt my body was experiencing, as I was about to shoot beyond where I could prop my gun on my knee.

“Can you see him?” Brian whispered.

My answer should have been no. My barrel was bobbing up and down increasingly. I pulled the gun hard into my shoulder and said, “Yes.”

The Federal 3rd Degree load fired, but no bird flopped. He didn’t even run at first — just changed directions, looking around like, “What just happened?”

I’d missed. I chambered another round, but the tom had already darted into the brush.

Brian: Susan had walked in my footsteps, as I’d missed my first chance at a Rio 19 years earlier. Unlike me, however, she had a legitimate reason. Why hadn’t I rehearsed that possibility with her the previous evening?”

Yet she continued hunting and remained upbeat.

Susan: We made a few more setups that afternoon, encountering more turkeys. That might sound like fun, but in Texas, I learned, it can be painful. We crawled over rocky terrain and over and through cacti. How bad did I want to kill a turkey? We came close at one setup but never got a shot. Time for a change.

Brian: Late that afternoon, we slipped into a creek bottom to cold-call. After a while, a jake walked through. Minutes later, Susan whispered that two gobblers were behind me.

“How cool,” I thought. “I’ve only known Susan for a while, yet she feels comfortable kidding me.”

Susan: Two toms, with a hen in tow, were strutting not 20 yards away. They were still a little behind Brian, so he had not seen them. I whispered, “Two toms hard to your left. Almost behind you.” Brian turned his head and looked toward me with one of those, “Come on, now” looks. So I said again, “Two toms, strutting, right there behind you. They are moving toward your left. Should come into view in a moment. Get your gun. Take a shot.”

Brian: Drumming revealed that Susan was serious. I glanced to my left and saw the gobblers walking along the creek. I was directly between Susan and the turkeys, so I knew she couldn’t shoot. Somewhat reluctantly, I eased my gun up and shot the trailing bird.

Susan was happy for our success, but I felt guilty. The mentor wasn’t supposed to shoot the first turkey.

Back at the lodge, I sheepishly related the story of Susan’s miss and our bird.
“Worst. Mentor. Ever,” I said.

But Day 2 offered promise — and redemption.

Susan: After a slow morning, our guide, Lloyd, took us along a high ridge to look at a flat below. As I started to scan through my Bushnell binos, Lloyd alerted us to a tom below. Actually, two toms were strutting with a hen in a clearing. Although it would take us about 20 minutes to get into position to hike to the flat, we decided to make a go of it.

Brian: This would be our opportunity. With Susan behind me, I slipped to within 100 steps of the birds by some cover and tried to set up. No go. The turkeys gobbled but would not leave the hen. With the clock ticking, I knew we had to get close.

Susan: Brian whispered, “The only way you’re going to get a shot is at that opening. I’m not sure we can get there and get set up without them seeing us, but it’s our only shot.”

We had to duck-crawl to the opening, stopping here and there to listen and watch. The birds were no wiser. Brian motioned for me to come up beside him. We were nearing the opening. “Get your gun ready,” he said.

Beside Brian, I was in a squat-kneel position with my gun raised, supported on my left knee. I had learned from the previous day’s mistake of trying to hold my gun up by sheer strength and willpower. I was ready.
“Here he comes.” Brian whispered. “Can you see him?”

Brian: Susan didn’t fire. And the gobbler was getting antsy.

“Can you see him?

I am not exaggerating. Brian could see the tom the entire time. I could not. Neither of us realized then that a limb from a bush to my right was hanging just in front of me. It was just thick enough to obscure my view for a few seconds longer than Brian’s.

Brian: Unbelievably, the longbeard did as we’d hoped, nervously easing to the left and stopping again.

Susan: Finally, he walked out far enough for me to see him clearly.

I’m still not sure if Brian answered that. I wasn’t about to chance being seen. I took a slow, steady breath and lined up the red-dot with the first tom and fired. Bird down.

Reload. Safety on. Then I got up from that awkward squatting-kneeling position. My motivation was flopping on the ground 20 yards from me. Brian beat me to the bird. He was super excited. And he was not alone. 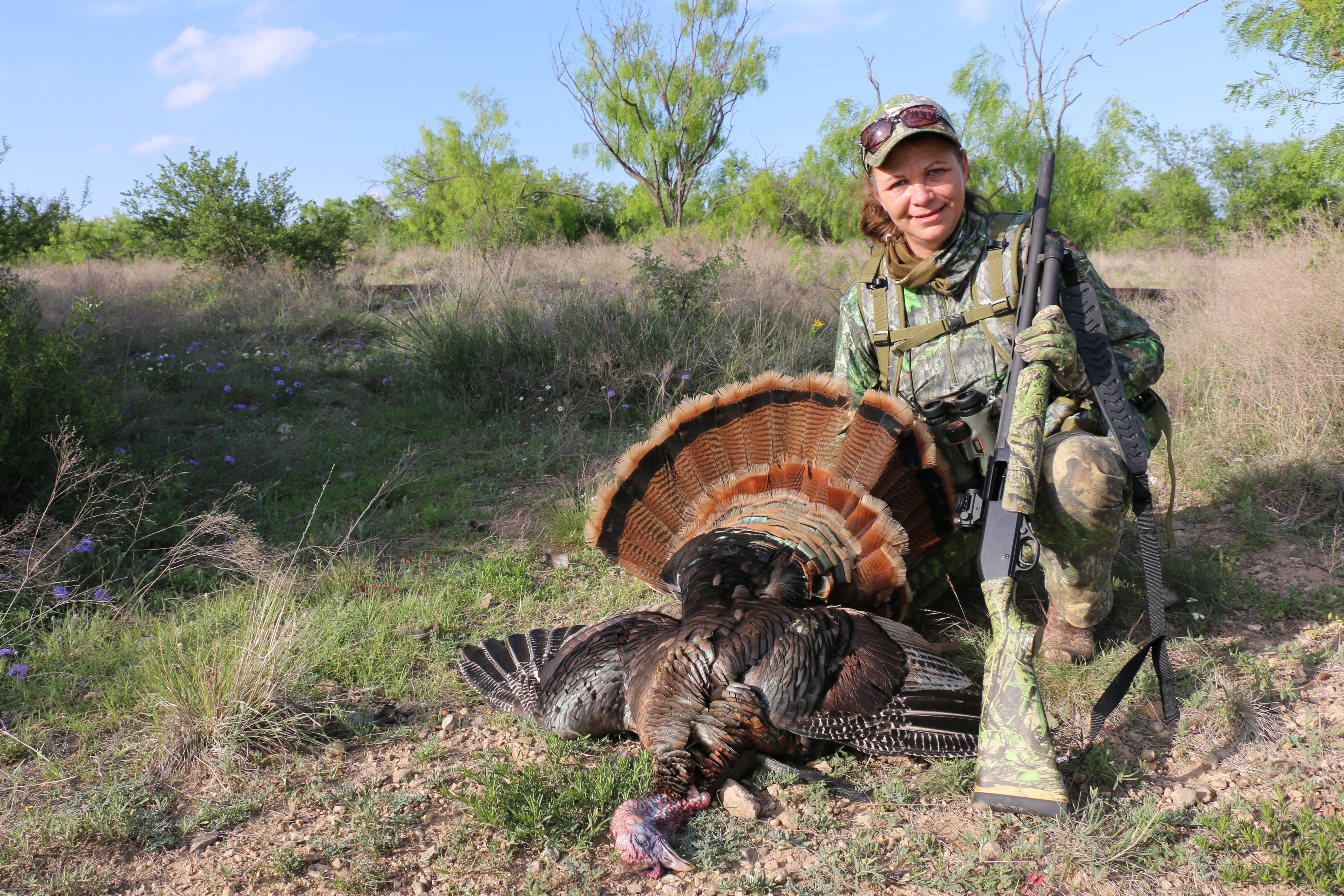 Brian: I was beyond thrilled, but I tried to express to Susan what a great job she’d done and how cool the moment was. Despite adversity and a tough situation, she’d come through.

My excitement increased seconds later as I discovered the gobbler had three jet-black melanistic primary feathers on each wing. I’d never seen such a bird in almost 30 years of hunting, and I told Susan she’d killed a unique trophy.

Susan: Being a first timer, I really wasn’t sure what melanistic feathers were and how rare they were. But Brian seemed to think it was super special, and I was happy with or without the black feathers.

Back at the lodge, I was proud to show everyone my bird (as was Brian), and I retold “my story” many times that night, as I would when I returned to work at the NWTF the next week.

Brian: It was surreal thinking about our experiences and remembering how I’d gone through many of the same ups and downs almost two decades earlier as a rookie Texas hunter.

I’d tried to use those early lessons to help Susan. However, I’m certain I was not nearly as good a student then as she’d proven to be during our hunt. 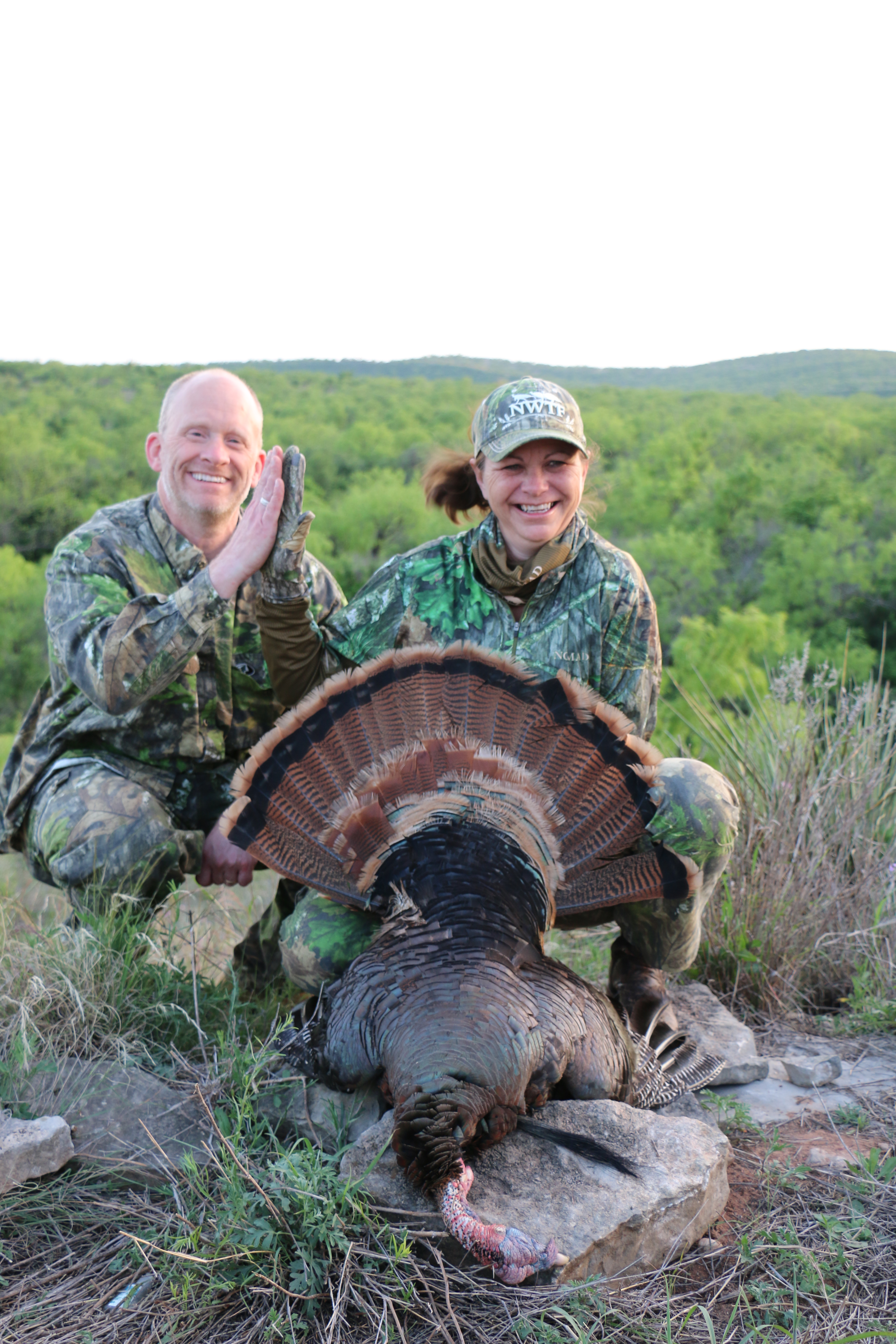