After Steve and Jordan interviewed Secretary Preston Cole of the Wisconsin Department of Natural Resources the morning of Aug. 19, we set out with the outfitters for a two-day paddle down the Lower Wisconsin Riverway, a 100-mile stretch with no dams, extensive islands, backwaters, sandbars and lots of recreation potential. Wisconsin River Outings, the outfitter, dropped us at a boat landing in Lone Rock, Wisconsin, where we met with Todd Ambs, Wisconsin deputy DNR secretary. The four of them paddled about 10 miles downstream to Gotham, where Todd had left his car.

Todd and I shared one canoe, Steve paddled another, which contained the dogs, Sage and Kane. Jordan paddled a third canoe loaded with camping gear. Todd told us about the unique flora and fauna of the Lower Wisconsin State Riverway and how this corridor is recreation mecca with users of all sorts: canoers, hikers, anglers, hunters and foragers. Outdoor recreation is a huge driver to the Wisconsin economy, bringing in some $17 billion dollars annually. Fittingly, the Wisconsin Department of Tourism's Office of Outdoor Recreation flawlessly saw to all the logistics surrounding this float trip.

Jordan, Steve and I, plus their two dogs, traveled downriver where we later found a sandbar to camp for the night. As I got the potatoes started for dinner, Steve caught a nice smallmouth bass that I filleted for the frying pan. As the sun went down and cast a hazy light over the willow islands, we enjoyed a dinner with the freshest possible produce and microbrews, not to mention crispy fried fish that had been swimming just minutes before. The whippoorwills and geese were calling as we feasted like sandbar kings and queens.

I also had the opportunity to learn about their journeys for Backpacker TV, as well as Steve's passion for fly fishing. This was a good segue into my work: the recruitment, retention and reactivation of hunters and anglers. I explained, as we ate river-caught fish and local veggies, just how much the message of food resonates with new adult hunters and anglers. There's an estimated 85% public approval rating for hunting and fishing as a means of providing food. While Jordan didn't fish, she totally grasped the connection of nature and local food. She was also kind enough to set up my tent and sleeping pad, all by Seat to Summit and poshly comfortable after a long day on the river. 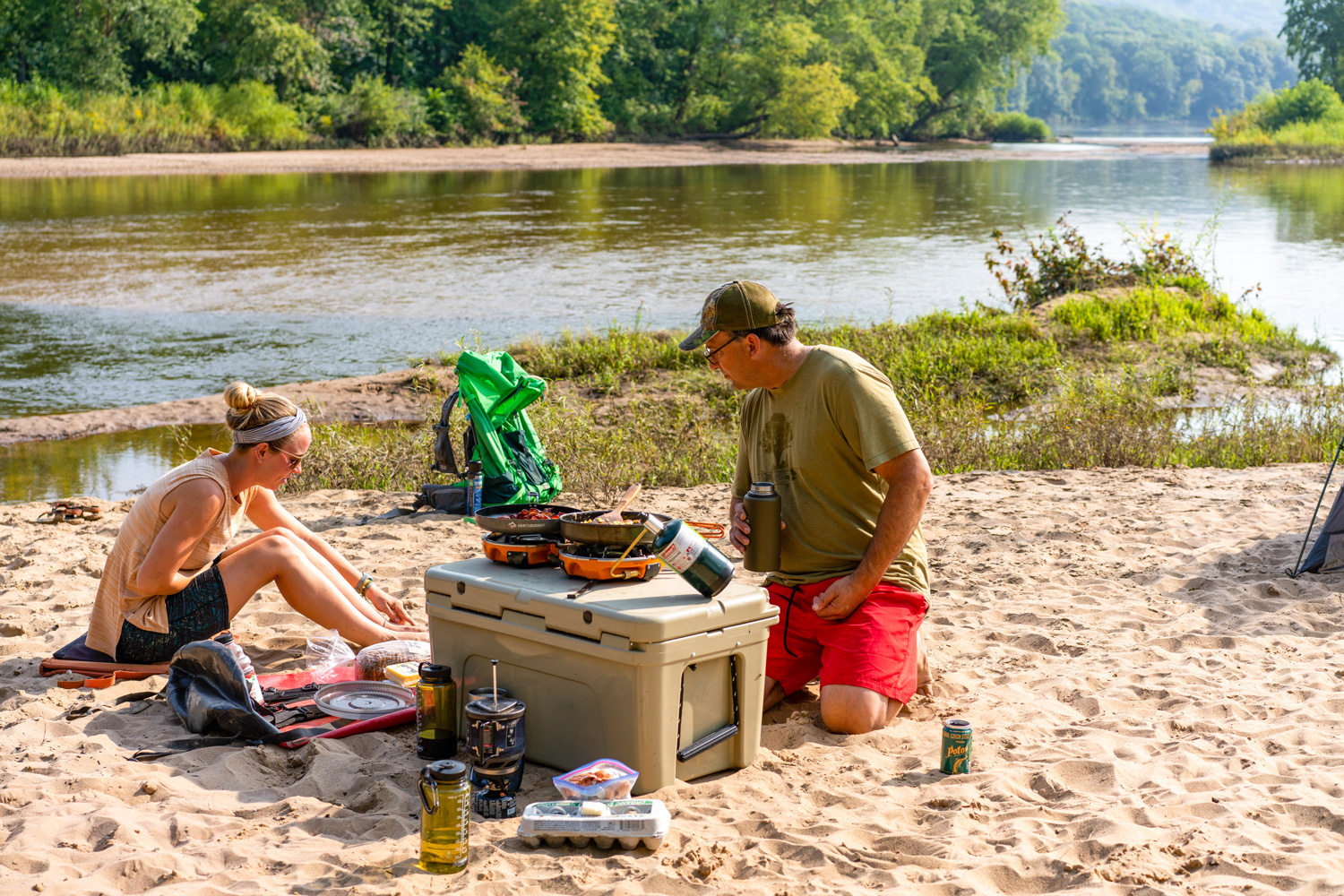 Fog had settled over the river the following morning. Here and there, a heron would lift from its roost with the characteristic fraawk issuing over the river. Mourning doves fed on the seeds of cottonwood trees, and I told Steve and Jordan that had this been a few weeks later, I would have brought my shotgun and harvested a few to go along with the breakfast of local bacon, eggs and cheese that I was cooking on their Jet Boil stove. The river had dropped a good foot overnight but was still much higher than normal due recent flooding.

The sun blazed down all day, as we launched our canoes bound for Blue River some 15 miles downstream. Steve and I fished periodically from our respective canoes and caught a mix of walleye,

sauger, smallmouth bass and freshwater drum. St. Croix was kind enough to supply us with medium-action rods, and Sheldons, which makes Mepps spinners, supplied lures. Using products from these top-notch local manufacturers added a whole new level of "local" to our voyage.

Here and there we would stop at an island to cool the dogs and ourselves. Though the paddling was downstream and easy, we were tired when we hit the boat landing at Blue River. Wisconsin River Outfitters kindly shuttled us and our gear back to Boscobel, where our vehicles waited. Steve, Jordan and I enjoyed dinner at a local bar as the dogs (amazingly well-trained) waited outside.

With a few hours of daylight left, Steve and Jordan followed me to a favorite trout stream. The edges of the ridges were soft in the evening light. The day had begun to cool. We parked in a grove of trees and slipped into the fairyland forest that contained the stream. It was green and cool and all manner of songbirds called in the tree canopy. As Jordan napped and watered the dogs, Steve fished dry flies while I tossed tiny Mepps spinners.

Sharing the river, this stream and two days with my two new friends and their canines was more powerful than I had imagined. I felt as if I had known them longer, maybe years, and it was a reunion of old friends. Maybe this wasn't so strange after all. People have been plying the river valleys and streams of Wisconsin, camping on sandbars and living off the land for some 10,000 years. We were just one more group of paddlers, one more stream feeding into the current.

Watch the whole episode when it airs on Backpacker TV Sept. 15.