The past is present in the work of award-winning Pennsylvania craftsman Scott Basehore.

“The call makers who came before us set the foundation,” Scott Basehore said, “and without Neil Cost, none of us would do what we do.”

The award-winning Pennsylvania custom call maker met Cost at the 1993 NWTF Convention, the first year the decorative box call competition was held. Basehore won. His entry had carved sides, with a gobbler head up front.

“No one knew what to do for a decorative box,” Basehore said, “so, I made a combined relief carving as a design idea.”

After Basehore won the ’93 decorative competition, Cost stopped by where the calls were set up. He looked at Basehore’s work, played the calls and said, “Yeah, those sound good.” And to the young call maker, that meant plenty. 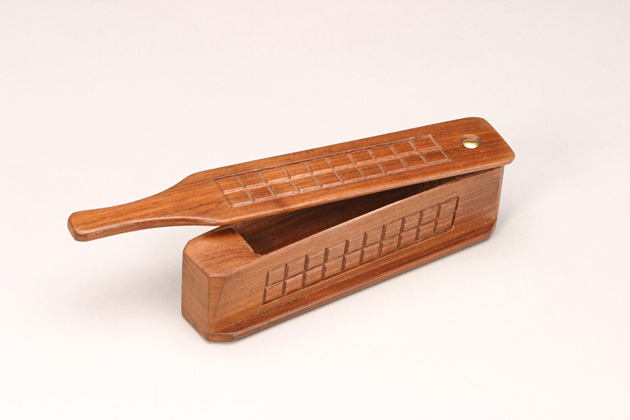 Basehore’s call making was also influenced by Don Chancey, a friend of Cost, and for whom the GNCC Don Chancey Award is named.

“Don would trickle ideas to me,” Basehore said, “including some butternut wood that was given to Chancey from Cost. When I first built box calls, I sawed and glued. Then I went in the direction of hand-hewn. I’d look at Neil’s calls and listen to the sound of his boxes. I was also fortunate to get a Lamar Williams call around then, similar to — and influenced by — Neil’s.”

Experimentation and a respect for call making history added to Basehore’s development. Early on, he had seen Cost’s call advertisements in Turkey Call magazine.

“Neil’s early calls were basic, as with all of us,” Basehore said, “but his later work is classic.”

What are the distinguishing characteristics of a Cost box?

“The checkering,” Basehore said. “That’s his deal. Cost also liked walnut for lids and bases in his short boxes and cedar for his long boxes. Later, his long boxes were gobbler stamped. A lot of times, he wrote something funny and witty on the calls, too. Cost surely had a big influence on many of us call makers. I’ve tried to change designs over the years and make it more of my call, like the gobbler paintings on the lid, but Neil’s long box and short box produced the sound I looked for. The sound of his calls are very distinctive and hard to beat.”

“Neil always said his long boxes sounded better when you got away from them,” Basehore said. “These days, competition call making has had guys develop long boxes that sound good up close, too, for the judges. I’ve tried to do this in my box calls as well, continuing Cost’s influence on me.”