When the Thunder Rolls

Who doesn’t love bluebird days in the turkey woods? They’re special but rare in the Midwest. Often, I face rain, wind, snow, storms, cold temperatures or a combination thereof. To punch multiple tags annually, I hunt every day I can. Lightning and gale-force winds are the only things that keep me inside.

Toms are Killable Regardless of Weather

Regardless of weather, turkeys are daytime movers. You have a chance at killing one every time you hunt. I’ve tagged a pile of toms in nasty spring conditions.

Following are stories of three toms I took in foul conditions and how I did it. 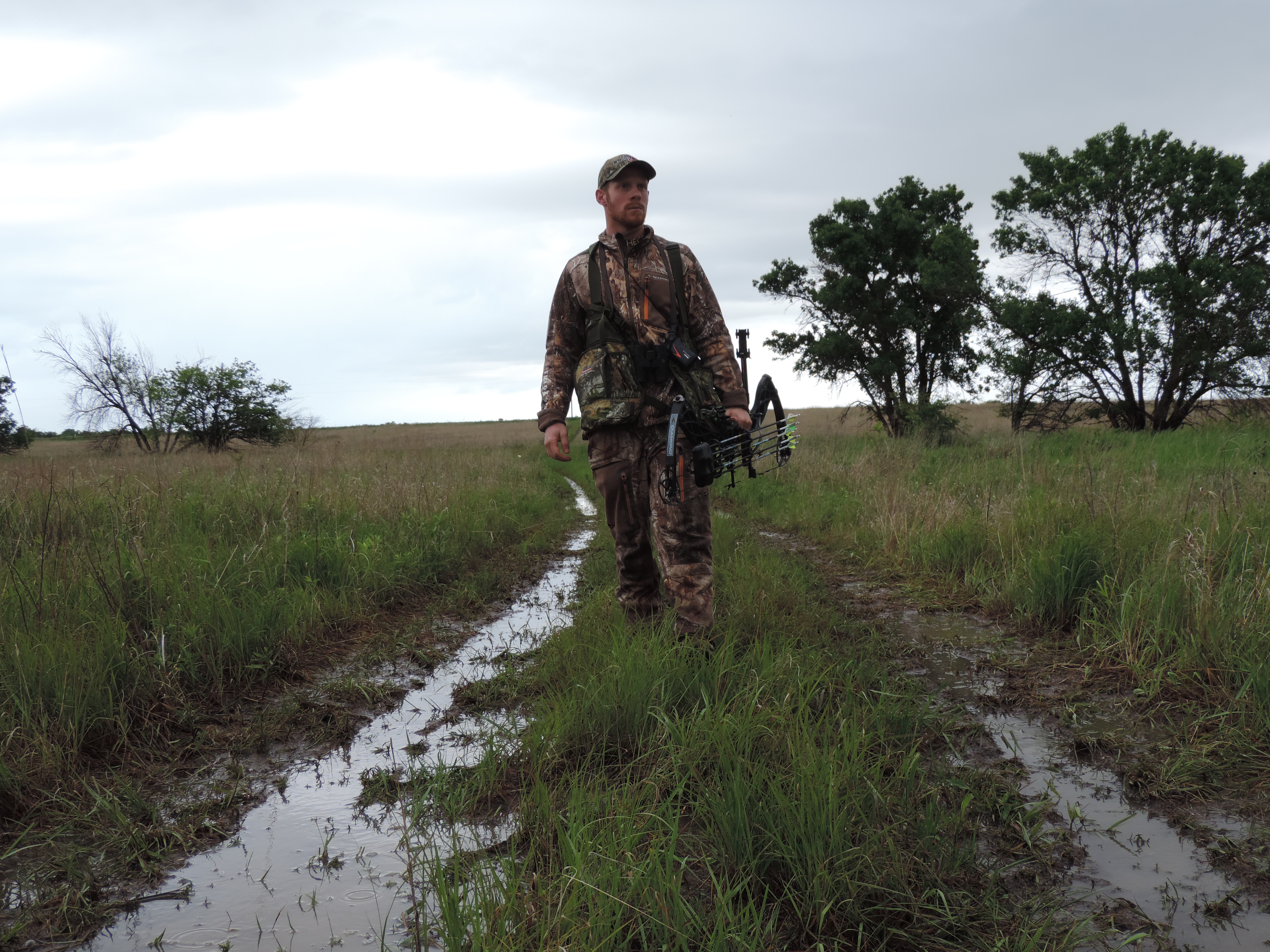 Thunder helped me kill a public-land South Dakota Merriam’s last spring. I spotted the bird and several others roosted in a giant cottonwood the evening before, and I knew I just needed to get within range of their touch-down location.

The next morning, the weather forecast showed thunderstorms. However, no lightning would strike within a few miles. Plan A it was.

As I approached the roost, I could see dark ornaments in the cottonwood against the dark-blue backdrop. I was approaching in the wide open with no cover whatsoever. Thankfully, the wind and distant thunder masked my approach. I set up undetected.

Two toms gobbled for the next 20 minutes. At dawn’s arrival, I clutched my Benelli 12-gauge a bit tighter. Soon, the turkeys landed in front of me just beyond range. I slowly raised my Montana tom decoy. The toms came on a string, and I claimed the larger bird.

The most prolific weather I’ve ever faced was during my 2016 Kansas hunt in late May. Several others and I fit in quick hunts between tornadoes. Wind was constant and rain sporadic, but we hunted from Primos Double Bull Blinds and stayed mostly comfortable.

I bow-bagged a hefty Rio to complete my archery Grand Slam. The others took some jakes, a bearded hen and a tom. With only four days to hunt, we got our birds because we didn’t let the weather prevail.

Toms had skirted my setup for three days, but I recognized a tendency. Birds were coming from and going to their roost on a logging road where field meets hardwoods. Once they’d roosted one evening, I moved my blind inside the timber 10 yards from that logging road.

That night brought freezing rain that lasted long into the morning. I got into the blind before first light. Only two gobbles rang from the iced-over forest. I knew I wouldn’t call in a bird in the freezing rain, so I’d rely solely on their pattern. I watched vigilantly, huddling deeper into my parka to buck the chill.

I soon spotted a tom on the logging road. With shaking limbs and quivering fingers, I prepared my bow for action. When he reached my shooting window 10 yards away, I harpooned him with a well-placed arrow. He ran a short distance and folded. 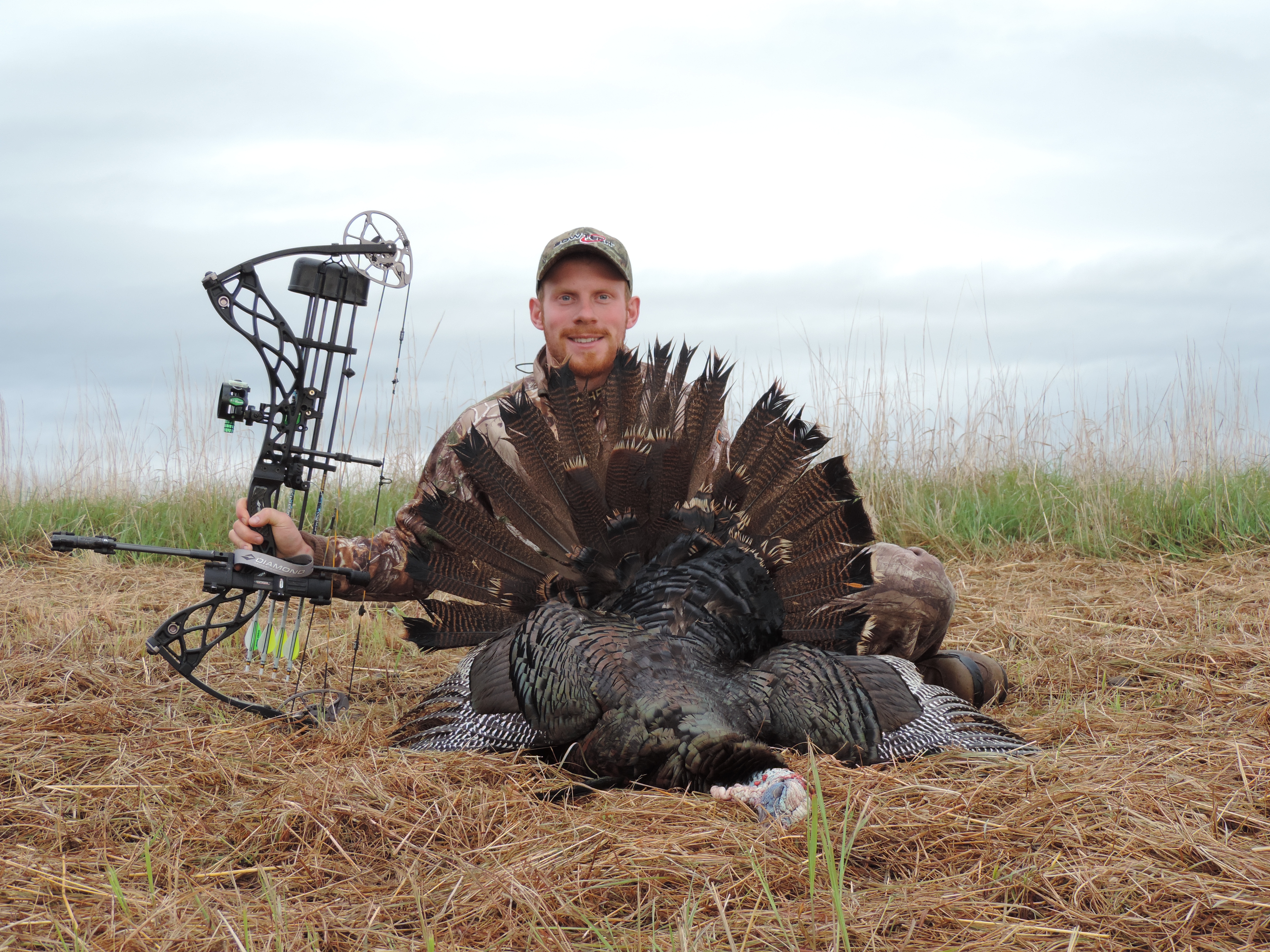