One of my favorite ways to “recycle” a harvested wild turkey is to use the wing feathers to build arrows.** The barred wing feathers provide not only a traditional look, but wild fletching has other benefits, too. You can do all the work yourself, from cutting the feathers, grinding the bases and burning the shape to gluing the feathers to the arrows. Or, you can get great wild feathers from an expert like Josh Echterling. He started grinding wild feathers for other people in 2014. For five years he perfected his craft and stockpiled feathers before launching his business and website, Wild Fletching, in October 2019. Below, Echterling explains the benefits of using wild turkey wing feathers, the difference in primary versus secondary feathers, tools needed and the process of turning raw feathers into arrow fletching.

“The benefits to using wild turkey feathers for fletching over farm-raised birds include: quality, since wild turkeys depend on their wings for survival, the feathers are thicker, longer and much more water repellent than farm raised birds,” Echterling said. “Also, by using feathers from wild turkeys, you are helping promote hunting and using the resource to the greatest extent rather than simply discarding the turkey. Finally, the aesthetics. Every single feather from a wild turkey varies just a little from the next, like a snow flake. This creates truly unique fletching.”

Hunters who legally harvest turkeys across North America may sell their feathers (depending on state game laws; check regulations) to Wild Fletching, trade their feathers for a store credit or have their very own feathers processed and returned. Archers who do not have feathers to send, may also order fletching and other feathers online where permissible.

“Primary turkey feathers are long flight feathers growing from the hand of a wing,” Echterling said. “Primaries are from the bottom of a folded wing and there are typically eight primary feathers. These feathers are longer and thicker than secondary feathers and have the barbs sticking out of only one side of the quill. These are the most prized feathers for fletching. 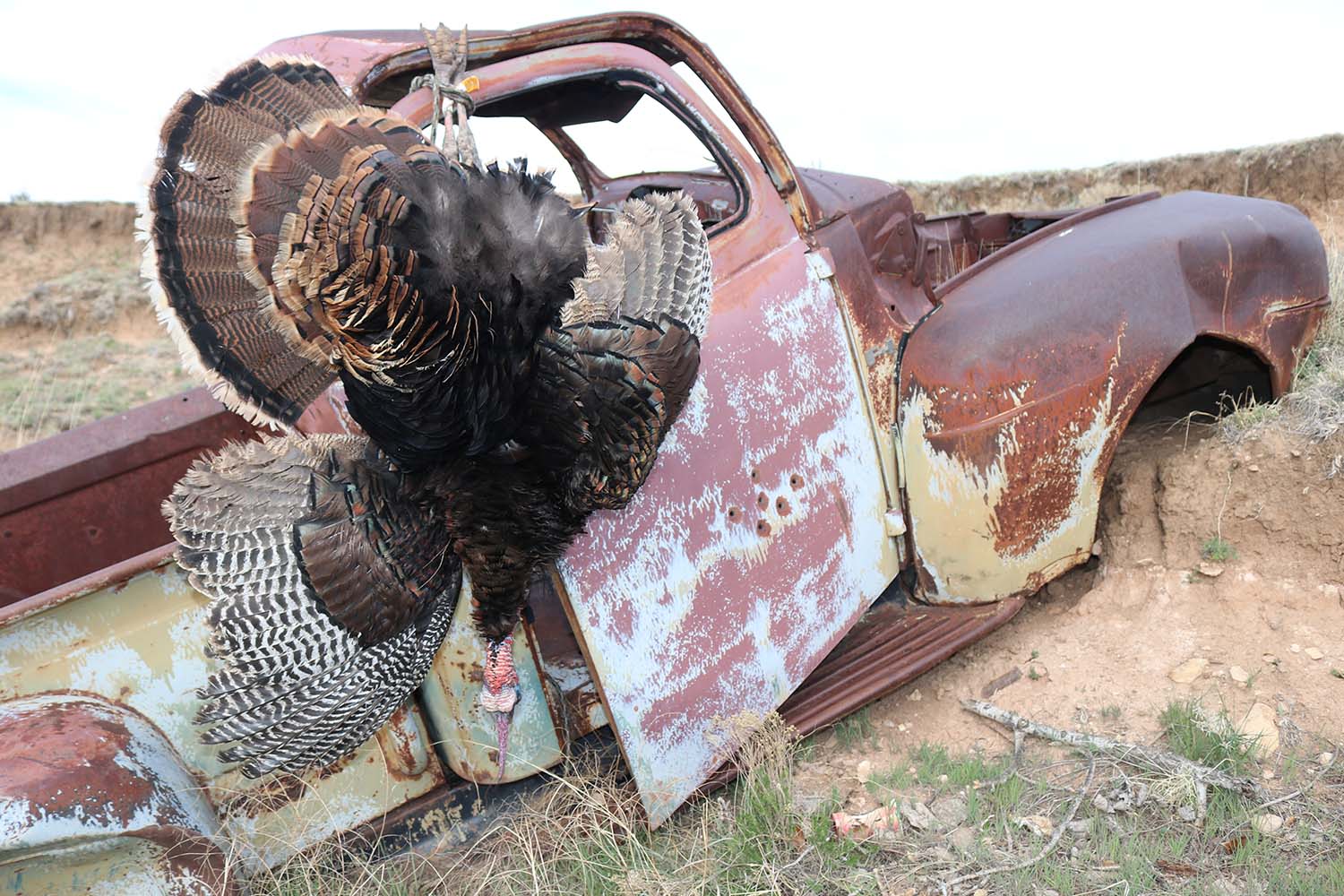 “The method I use for dying feathers is as basic as I can make it while obtaining great results. The feathers are soaked in warm water with a little dish soap to remove dirt, blood and excess oils which may repel the dye.

“Next, the feathers are submerged in a hot dye bath consisting of an acid dye used for bonding color to animal proteins, and a weak acid such as white vinegar or citric acid that is mixed until the desired color is obtained. They are then removed, rinsed and dried.

“Left wing and right wing feathers are named from which wing the feathers come off the bird. When using left wing fletching, the arrow will rotate counter-clockwise and right wing will rotate clockwise. Left hand or right hand shooters can shoot either wing. There has been a misconception that the arrow will start rotating toward the bow as it comes off the string if the wrong wing is used; however, fletching does not obtain enough air resistance to start rotating until it is feet past the bow. The only input I have on left wing versus right wing is to ensure all the fletching are the same on each arrow.

“Tools the do-it-yourselfer would need to turn the raw wing feathers into usable fletching would include wire cutters or utility cutters to remove the primary feathers from the wing. Once the feather is removed, the quill can be split down the center with a utility knife and the finish grinding can easily be done on a belt sander with a straight fletching clamp. You can search YouTube to watch how-to videos on processing your own wild feathers.”

Barred turkey feathers aren’t just for recurve or longbow shooters. I prefer real feathers versus plastic vanes when bowhunting turkeys. I also prefer large broadheads designed for head and neck shots, designs like the Gobbler Guillotine or the Magnus Bullhead. Through trial and error, I’ve learned that the smaller 100-grain models of these head-lopper-style broadheads are just as deadly and fly better than the larger 125-grain models. Still, 4-inch feather fletching with a hard helical seems to steer these oversized broadheads better than small plastic vanes.

Four o-clock in the morning is much too early to be awake, but for spring turkeys I make an exception. In a dark drizzle, I drove 30 miles from town to a secluded river bottom in northern New Mexico. Scouting the day before revealed a cluster of cottonwood trees where turkeys were roosting. Spent feathers and lots of fresh droppings under the tall trees were undeniable. A pop-up blind was set just 150 yards from the trees. Nearby, I had glassed a flock of 20-something turkeys including eight gobblers. Opening day anticipation ran high. 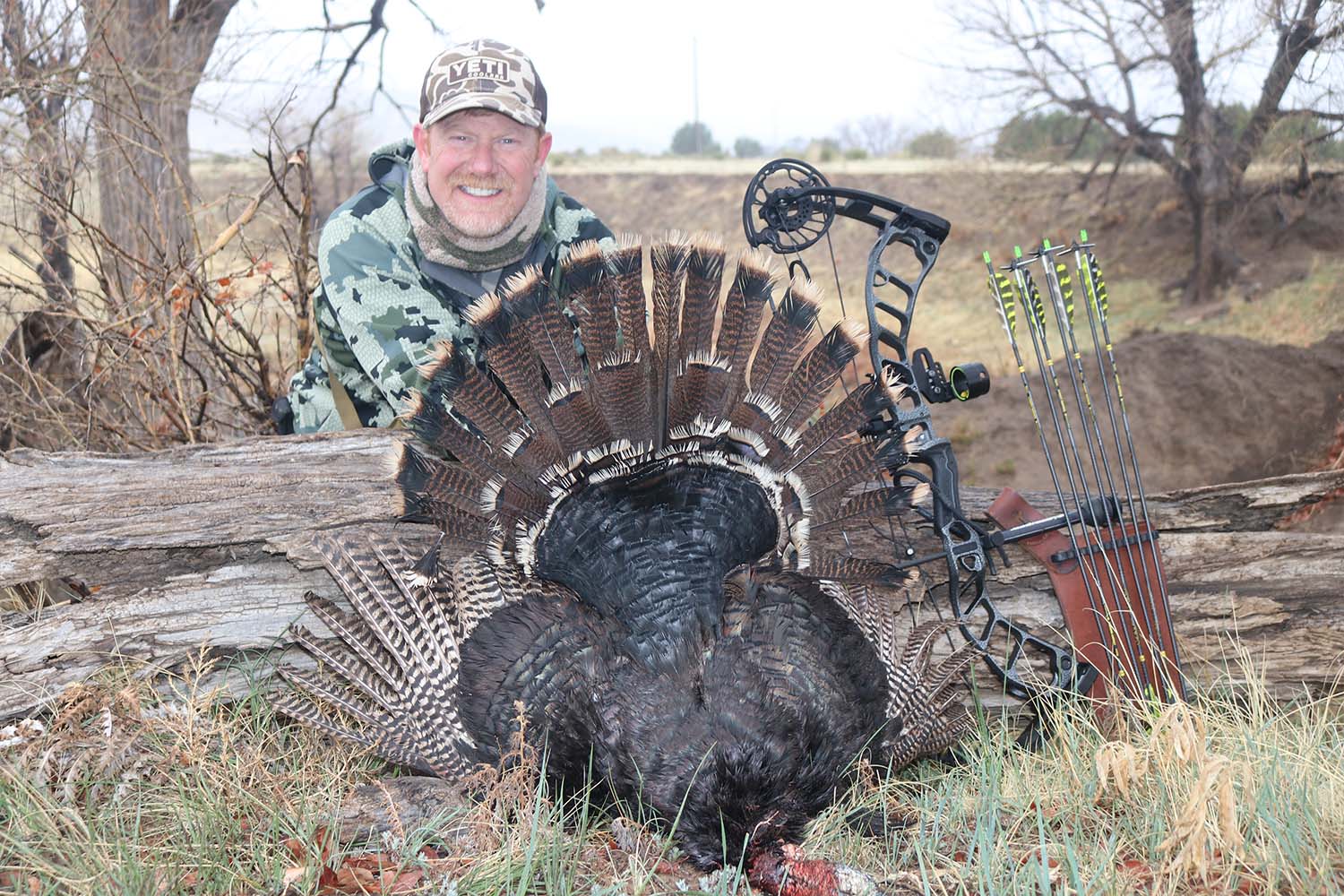 The author with his opening morning gobbler in the rain in New Mexico 2021. An 11-yard shot with an arrow fletched with wild turkey wing feathers dropped the gobbler instantly.

Nestled within the confines of a pitch-black blind, the grey, soggy landscape started to wake. From the pop-up blind I could see dark blobs in the tops of nearby trees. I snapped a couple of pictures. Slowly, the birds flew to the ground. Three gobblers strutted 100 yards away with 10 hens in the misty rain while I softly called on my box call and diaphragm calls. The lead hen cocked her head, listened and headed my way, towing the whole flock behind her.

When one of the soggy gobblers headed toward my three-decoy spread (a feeding hen and a jake on top of a bedded hen), I drew my bow. The Prime Nexus 32 bow rig was set at a modest 58-pound draw weight, easy to draw smoothly and hold steady.

The gobbler was 11 yards away. My bright green sight pin steadied and the arrow was gone, the 100-grain Magnus Bullhead lopping the big tom in the neck. He dropped with barely a flutter. The New Mexico gobbler lay in the wet grass while the other turkeys just stared. The season was less than one hour old, and I already had spent a tag and received an unforgettable harvest in return.

While snapping pictures of my wet gobbler, I noticed my arrow fletching was surprisingly unaffected by the weather. They maintained their shape and firmness despite a slow drizzle of cold rain. The best part? On top of the organic, sustainable meat this natural resource provided, I had another tom to “recycle” for more custom arrows for the next year’s hunt.