The wild turkey’s various features are as visually appealing as they are peculiar, from its dangling snood to its iridescent feathers. These features are interesting to observe and help make wild turkeys the well-adapted survivalists and masters of elusion that we love. Here is a breakdown of some of the wild turkey’s distinct anatomical features and their function, from snood to spur, if you will. 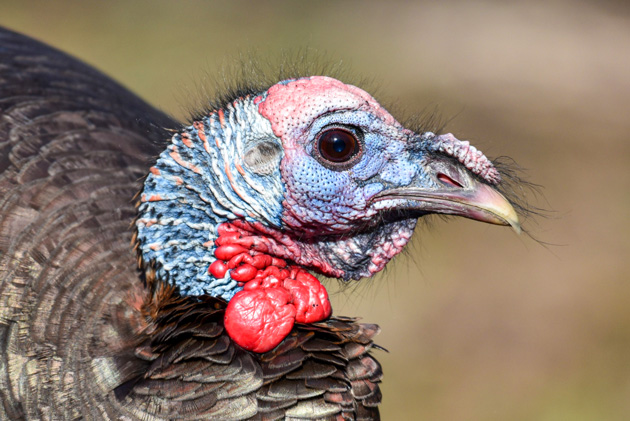 The wild turkey’s snood is one of those features that you think “What does it even do?” However, this dangling flare on top of the beak is not pointless.

“The snood serves several purposes,” said Mike Chamberlain, Ph.D., Terrell Professor of Wildlife Ecology at the University of Georgia. “One, it's part of the head ornamentation that males use, so it's important in attracting attention from females. Two, it also assists with heat dissipation when turkeys are dealing with hot weather.”

Every turkey hunter knows how critical it is to remain visually hidden from wild turkeys. A wild turkey can easily spot a hunter from a few hundred yards away if not properly concealed.

“Turkeys have monocular periscopic vision, which means that their eyes function independently of each other to transmit information to the brain,” Chamberlain said. “Because the eyes are on the sides of their heads, turkeys have an almost 360 degree field of view around them.”

Most of the time, we don’t think about a wild turkey’s ears because they aren’t visible, but anyone who has ever called to a gobbler knows they can pinpoint your location from the other side of the woods.,

“The ears are behind and slightly below their eyes,” Chamberlain said. “Turkeys have no external ear like we do, but their ears register volume of sounds separately and transmit that information to the brain. That allows turkeys the uncanny ability to determine distance to a sound and then go to that exact spot where they heard the sound.”

Mood characterization is arguably more pronounced in wild turkeys than any other species. With its head changing from red to white to blue, this distinct phenomenon is still not fully understood.

“Head color changes in males occur as birds become excited, agitated or otherwise change moods,” Chamberlain said. “We don't fully understand what each color means, but there's a fairly broad consensus amongst hunters that see birds often that red colors often signal irritation or fear. It is also believed that white on the top of the head serves as a form of signal, as that is often highly visible when males are excited and approaching hens or hunters they think are hens.”

With between 5,000 to 6,000 feathers arranged in tracts, the wild turkey’s plumage serves an array of purposes, including insulation, waterproofing and ornamentation for mating.

“The iridescence is pronounced in males, and functions to help males attract attention from hens,” Chamberlain said. “There are differences in tail feathers and the coverts that cover the base of the tail feathers, with Easterns and Osceola’s having brown tips, while Rios have buff/tan tips and Merriam’s and Gould’s have more whitish tips.”

It is believed that the beard, which is actually a modified feather, is part of the wild turkey’s ornamentation and helps males as part of their displays for females, but with interesting cases of females having beards, general consensus is not definitive.

Very rarely does one see a wild turkey fly for general travel. It usually only flies to and from its roost. But do not be fooled, wild turkeys can fly with vigor and long enough to escape most precarious situations. In addition, the wild turkey’s wings serve various other purposes in its day-to-day life.

“Wing slapping is a common way that birds fight with each other when establishing and testing their pecking orders,” Chamberlain said. “Turkeys also use their wings when they dust, which is when they lay down and wallow in dirt while ruffling their feathers and flipping dirt on themselves.”

For the same reason hunters love to display gobbler tail fans, so too do male wild turkeys like to show it off for attracting mates, but it serves other purposes too.

“The tail is used for displaying by males, as it makes the birds look larger and more attractive to females,” Chamberlain said. “But the tail also serves as a rudder, if you will, as when turkeys fly it is used for steering and braking when the bird needs to adjust in flight or slow down to land.”

If you’ve ever harvested a large, old tom, you know that getting in the crosshairs of its spurs would not be pleasant. Some hunters will even pick up a harvested gobbler by the head just to avoid a possible spur thrashing. In addition to being one of its modes of defense, males turkeys will use their spurs to fight for pecking order dominance and can deliver severe cuts and bruises.