Or how about this? “Those guys sound pretty good in an auditorium, but that wouldn’t cut it where I hunt.”

Jealousy might explain some of those comments, but some folks still believe the smooth, precise turkey sounds of competition calling differ from down-and-dirty woods yelping that puts gobblers in the truck. Today’s top contest callers will tell you that’s not true. In fact, their stage routines usually mimic and expand upon lessons they’ve taken from the turkey woods. Further, their competition experience improves their woods calling and provides great learning opportunities for everyday hunters and callers. Here’s a look at how high-level pros take their calling from the woods to the stage and back again. 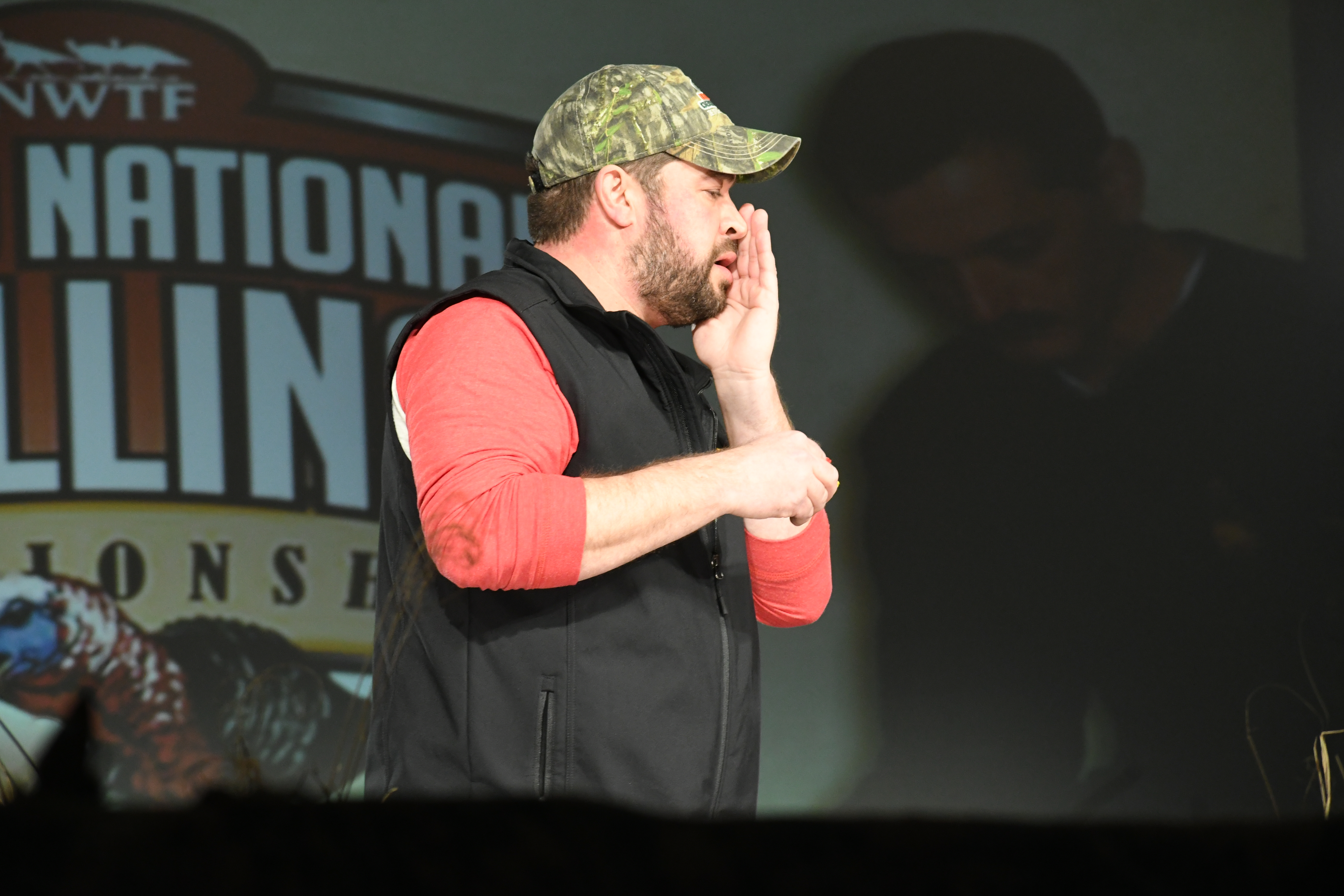 Contrary to some conventional wisdom, woods calling translates seamlessly to the contest stage, and vice versa. After all, every turkey caller started as a hunter.

“The only real difference between stage calling and woods calling is stage calling is much cleaner,” said 2018 Grand Nationals Calling Contest Senior Open champion Dave Owens. “You’ve got to be cleaner when you’re on stage because you have human ears listening to it and not turkey ears.”

Josh Grossenbacher, the 2015 World Turkey Calling Contest champion and 2018 GNCC Senior Open first runner-up, agreed, saying he concentrates on being mistake-free during contest routines but doesn’t worry about slip-ups in the woods.

“But as far as the preparation for a calling contest, I really feel like it’s pretty much the same as getting ready to go hunting — just covering all the bases and sounds and trying to perfect everything,” he said. “In the woods, I’m not worried about making mistakes, and I’m also not worried about putting together a routine, although that’s something I always got carried away with years ago. You’d practice your routines so long, and I’d get wrapped up in doing the same stuff over and over again. Real turkeys don’t do that.”

Matt Van Cise, who took third in the 2018 GNCC Senior Open and has a record-tying five GNCC Senior Open titles, said his sound doesn’t change from the woods to competition, though the time restraints of a contest makes callers condense their routines.

“In the woods, we are trying to have a conversation with a wild turkey, trying to convince him that he needs to come visit, and in most cases, we only say what’s necessary to get him to commit,” said Van Cise, whose other titles include eight World championships, two GNCC Friction wins and two World friction triumphs. “On stage, we are asked to do a morning’s worth of calling in a minute.”

The callers said their contest chops come directly from hunting experience. After untold hours and seasons of mimicking, listening to and studying turkey vocabulary, they process those lessons and forge them into ultra-realistic stage routines.

“Where I believe experience in the woods pays off is by doing those things that haven’t been done yet or haven’t been replicated perfectly — when you can do something a little bit differently than what’s been done before, but it’s pure turkey,” Owens said.

“With stage calling, you want to set yourself apart, but you don’t want to do something so outlandish that it’s silly. I think having the experience of hearing turkeys do things that aren’t replicated very often and then committing them to memory and then being able to replicate them accurately, that’s where experience and woods time pays off.”

Van Cise agreed, summing up what his hunting calling brings to the stage in one word: “Realism,” he said. “Only the very best take this from the woods to the stage.”

“One thing that I’ve really started picking up on and started paying more attention to is pausing between sequences and not rushing into stuff,” Grossenbacher said. “When that hen’s out there yelping, she’ll stop there and listen for a bit, and I know myself in the past, I’d just get carried away and just keep yelping and not take that break. From the top callers, you notice they’re spacing their sequences out and just making it a lot more realistic than a guy running a turkey call.”

Owens said contests also help you master the full range of turkey vocabulary, not just hen sounds commonly used during spring hunting, such as the yelp, cluck and cutting.

“It makes you practice things that you maybe wouldn’t use in the woods frequently, like kee-keeing and jake yelps, because you’re going to be scrutinized when you’re on the stage, so it makes that easier to replicate well when you’re hunting,” he said. 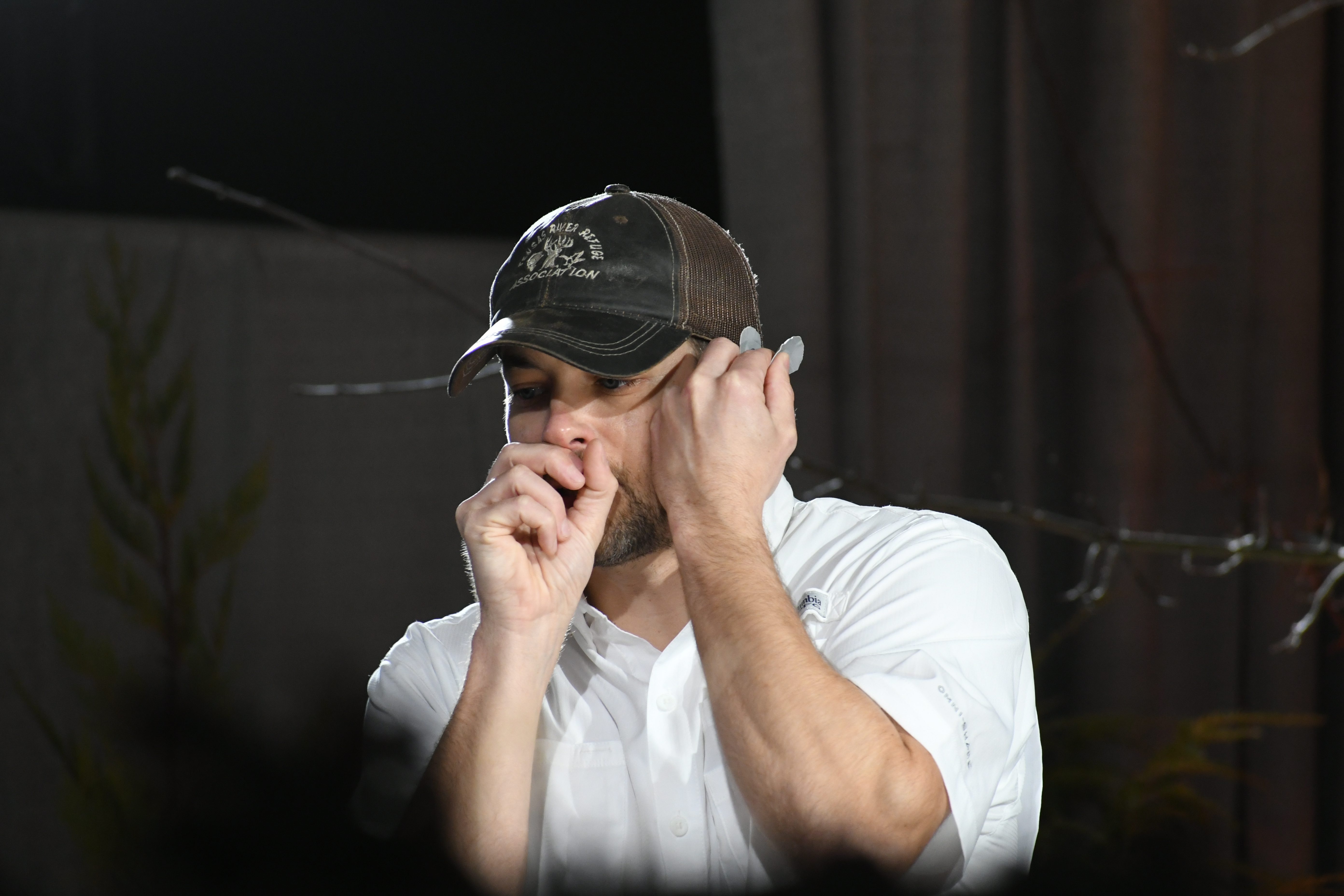 HOW THIS CAN HELP YOU

Of course, most hunters want to learn from contest competitors and improve their calling. But what’s the best lesson someone can pick up from watching GNCC calling contests? Van Cise said it’s straightforward.

“Spectators can learn about the language of the wild turkey and how different calls can be used together,” he said.

Grossenbacher agreed, adding that listening to top-level calling reveals nuances many folks might not otherwise note.

“You kind of hear some of the tones that aren’t just from the turkey call, like nasally sounds they’re adding with the front end of a yelp,” he said. “You can also pick up on the way the callers are catching their breaths or the way they’re taking breaths in between.”

Watching contests can also give people an appreciation for the depth of preparation required to compete in high-level competitions, according to Owens.

“What they can pull away from it is these guys who are doing it typically have a lot of experience listening to turkeys,” he said. “I think listening to turkeys versus studying turkey vocabulary are two different realms of the game. You can listen to get the high points but miss the little things. The top guys — the guys walking across that stage at the finals — they listen to the little things, and that’s what has put them there.”

And the callers pointed out an obvious lesson most hunters can glean from contests: the importance of volume control.

“A beginner or someone who’s not practicing enough, they’re going to go in there and honk on the call,” Grossenbacher said. “I think volume control is really big — being able to do that soft stuff, put it together and make it sound like a turkey.”

“I think in a lot of cases, many people bring way too much volume to the game than needs to be there,” he said. “They practice it loud so they can hear it and then bring that straight to the woods. It’s not required. They don’t realize how well turkeys can hear. Volume control is very important in calling, and I think it’s not talked about very much. It’s a lot easier to make a normal- or louder-volume call. If you’re doing it at normal volume, it’s easier to get a rollover and front end of the yelp, but if you take that down to where it’s barely audible and get all those components in a very quiet sound, it can be much more difficult.” 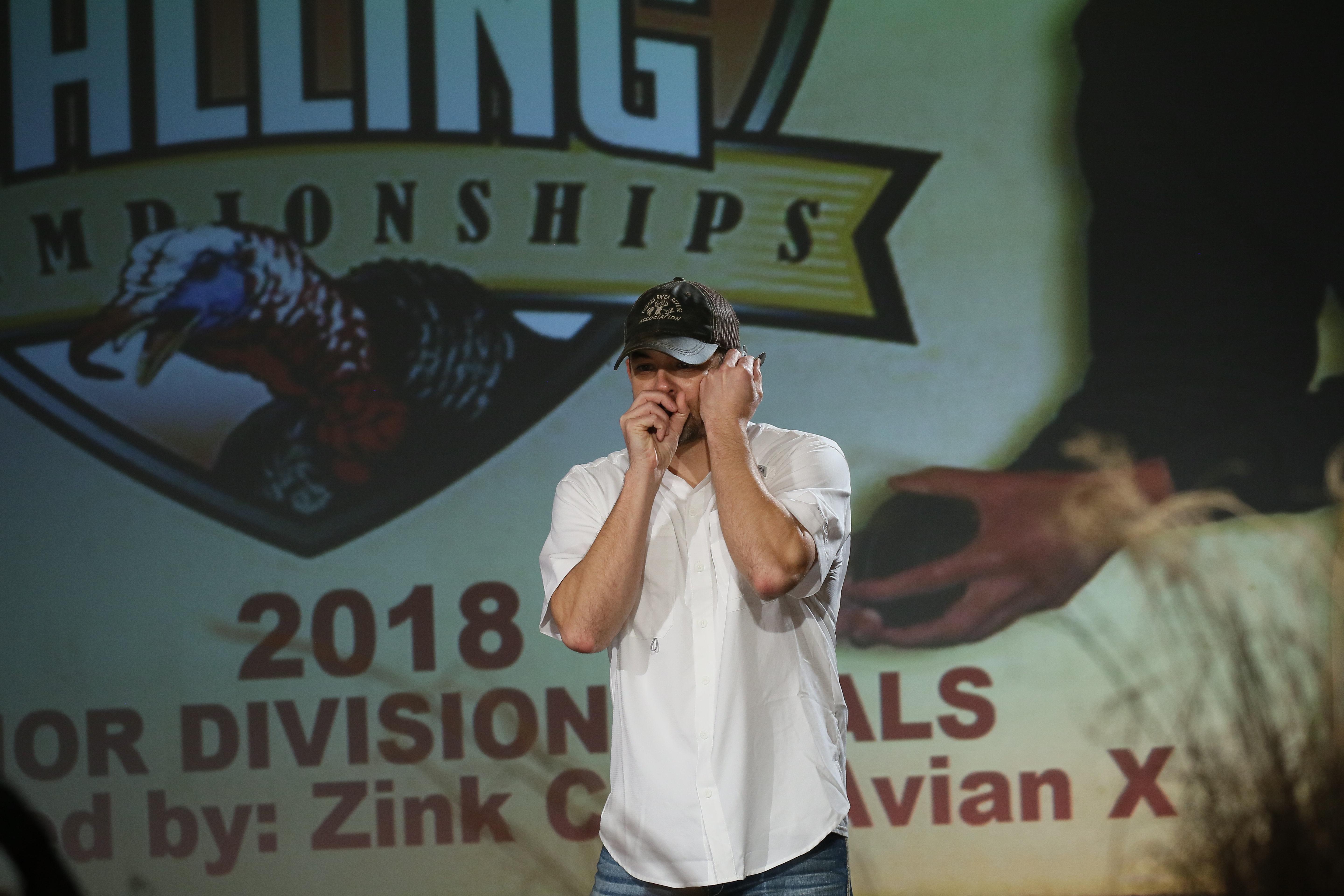 Whether you transition woods-calling lessons to the stage or incorporate tips and nuances from the pros into your hunting repertoire, improving and refining your yelping can only help your cause. Ultimately, you’ll be more successful afield and derive greater satisfaction from immersing yourself in the fascinating vocabulary of wild turkeys.