More than 70 of the top turkey callers in the world came to Mobile, Alabama from at least 18 other states on June 11-12, 2021, at the Arthur R. Outlaw Mobile Convention Center, to compete for the title “world champion.”

Held in conjunction with the 2021 Southeastern Hunting and Fishing Expo, the World Turkey Calling Championship pitted the best callers in several competition categories. The winners received cash prizes, but the coveted prize of earning the title “world champion” with all the rewards associated with that accomplishment meant more to them.

A panel of expert judges hid behind a screen so they couldn’t see the competitors. Event staff assigned each caller a number for every event. To avoid the appearance of bias, the judges only heard the number, then the calling, so they didn’t know the identity of anyone on the stage for the scoring. 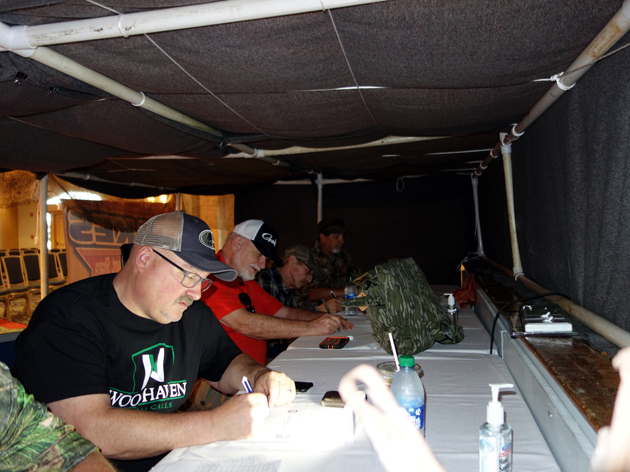 Competitors performed a list of designated calls, such as birds fighting or gobbling. With the scoring complete, Craig Wolfe of Auburn, Ala. won the Open Division championship by only 3.5 points. Wade Watson placed second, followed by Wayne Dozier in third.

“I’ve been competing for 12 years, and this is my first world championship,” Wolfe commented. “The competition is always tough at these events. I was just trying to do my best. I just wanted to do the best run I had ever done. I felt pretty good after I finished, but there’s always something I could do better. I like that the contest is held Alabama so I didn’t have too far to travel to compete.” 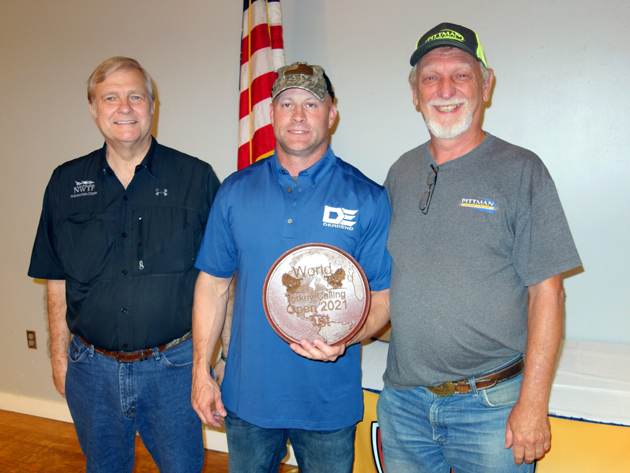 In the Open Division, each contestant could make sounds with friction or “air” calls. A friction call requires rubbing two objects together, such as a slate and a striker or rubbing the lid of a box call across the wooden body to make sounds. For “air” calling, competitors put devices into their mouths to blow various calls.

“In the finals of the two main contests, callers had to perform five different required calls,” Weiss explained. “A perfect score from one judge on each call is 20 points, so they had a possible 100 points from each judge. In the Open Division, callers could use either friction or air calls. What they used was their choice as long as it was not electronically enhanced. This contest is sanctioned by the NWTF, so we follow their rules.”

For the Friction Competition, callers could only use friction calls. In this event, Ben Chamberlain of Claysburg, Pennsylvania earned his third world championship calling title. The 44-year-old has been competing in turkey calling contests for 34 years.

“This one means more to me than my first one,” Chamberlain said. “When someone wins a world championship, it’s special. I’m proud and excited. I knew when I walked off the stage that I had called well. I had one of the cleanest runs I’ve had in a long time, but I didn’t know if I was going to win. Many great callers competed. I thank Woodhaven Custom Calls for sponsoring me and helping make this happen. I also thank Kenny Weiss and his whole family for putting on this contest. I look forward to coming back to Mobile to defend the title next year.” 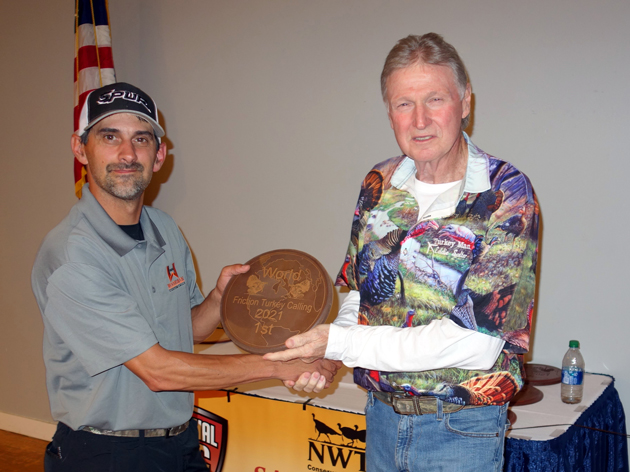 “At this level, everyone has to be almost perfect,” Weiss remarked. “We saw some very close scores in all the contests.” 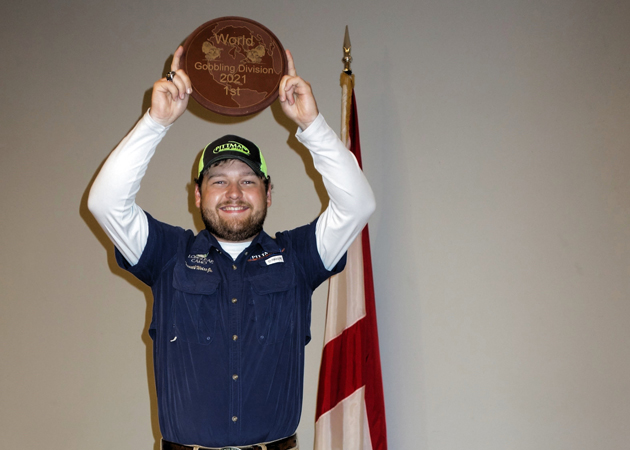 “It’s really exciting to win my second world championship in my hometown,” young Kenny said. “I’m glad to have the championship back in Mobile. I felt really confident about my calling when I finished, but a lot of tough callers competed here. I felt I did a clean run, but I had some serious competition.”

In other competitions, Shane Martinez won the owling event, followed by Tater Rich and Robert Huber. One of the more popular events for spectators to watch, teams of two callers had to act out certain scenarios as if they were turkeys. J. R. Lanham and Mitchell Johnston won the two-person Team Challenge. Matthew Presley and Shane Martinez came in second. Wayne Dozier and Jared Lowe finished third.

In addition, callers could compete in various age and skill divisions. Callers 10 years old or younger competed in the Poult Division. Those between the ages of 11 and 15 competed in the Junior Division. The Intermediate Division included callers 16 to 20 years old. Anyone of any age could compete in the Amateur Division if they had never won a previous championship.

Eddie “the Turkey Man” Salter with Eddie Salter Game Calls of Evergreen, Alabama emceed the calling contests. He won world championships in 1985 and 1989.

“I’m always excited about being a part of the turkey calling championship because this is where I got my start,” the legendary sportsmen stated. “I think the contests have progressed so much since I won. Back then, we could get away with a mistake or two. Now, callers don’t make many mistakes at this level. I don’t think a live hen turkey could win a contest today. I’m so happy to see the Poult Division in the contest. We need to get kids more involved in the outdoors. I’m also happy to see the world championship back in Alabama where it started.”

The first World Turkey Calling Championship occurred in Mobile on Jan. 4, 1940, but it went elsewhere for decades. Kenny Weiss, Sr. was instrumental in bringing the contest back to Mobile in 2019. The 2020 contest never happened because of the pandemic.

“In 1940, Fred T. Stimpson, the grandfather of the current Mobile mayor, won the first turkey calling contest,” Weiss, Sr. said. “We brought it back to Mobile in 2019, and I’m hoping to keep it here as long as I’m able. After that, I hope someone else will keep it here. This year, we had more callers in the two main contests than we had in 2019.”