Patience is the mantra in the turkey woods. After two years of walking the woods with an empty vest, I was well-versed on the subject. Entering the 2019 turkey season with the added weight of my grandfather’s legacy in the form of his hand-me-down hunting knife, I had high hopes of punching a tag.

A trip to the lone star state held promise and opportunity. Upon arriving at Spike Box Ranch, I was greeted by an incredible staff that made camp feel like home and this un-seasoned turkey hunter feel like she belonged. I found myself fortunate to have not only another woman at camp, but the wilderness woman herself, Kristen Alberts. As we complained about ill-fitting camo and clunky equipment, I knew we’d be thick as thieves. However, our complaining was cut short by JJ Reich, communications manager for firearms and ammunition for Vista Outdoor, providing a solution to one of our problems. He presented us with the Savage Arms Accufit system, a series of comb inserts and length of pull spacers that allowed us to create a custom fit on the Savage Model 220 bolt-action Turkey shotgun. As a petite woman tired of turning to youth guns for the best fit, I was ready to get dialed in. After attaching an Aimpoint Micro H-2 scope, grabbing Federal Premium ammunition and talking strategy with my hunting partner, the illustrious Steve Hickoff, I had plenty of confidence for the coming morning. 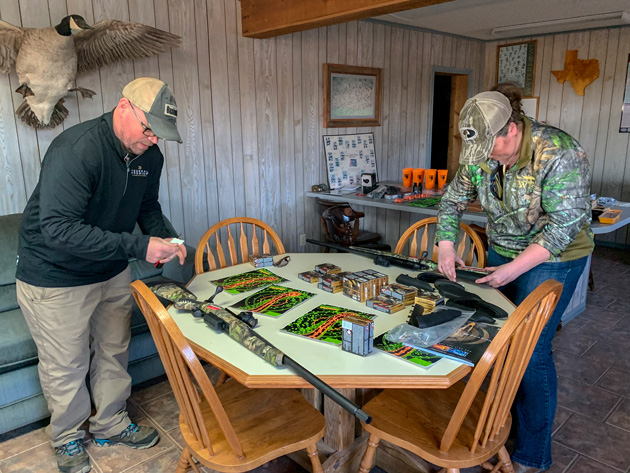 Steve and I hit the ground hard for a day and a half, navigating the tough Texas terrain. He seemed impressed by how easily my small frame was concealed in the small mesquite trees, but I’m sure that sense of admiration diminished when I lost a boot to the mud and had to be hauled out. Steve was able to weave together sage turkey hunting advice with a great sense of encouragement and humor to keep my spirits up. On the afternoon of the second day, we took some advice from Spike Box Ranch hunting guide, Mr. Ronnie, and I was able to take my first bird within a few hours. 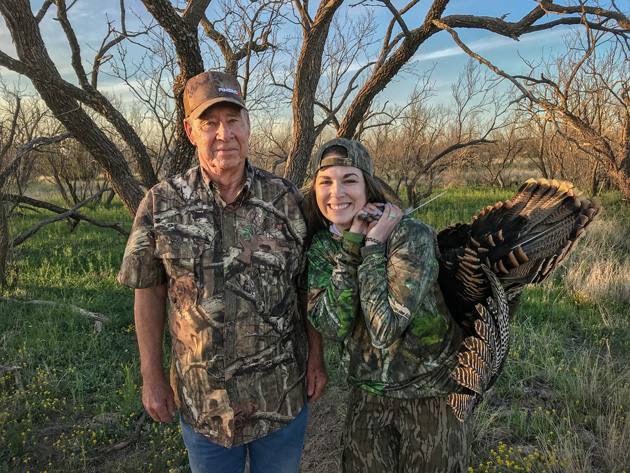 With my Rio on the ground, I was able to realize the real moment I’d been waiting for. I took a very special piece of equipment from my Alps Outdoorz Grand Slam Turkey Vest and punched my first turkey tag with a Buck knife purchased by my grandfather in the 1960’s. He and my father had both used it on a variety of game across several decades. I can’t imagine either of them ever considering passing it down to me until I took to the woods two years ago, much to everyone’s surprise. 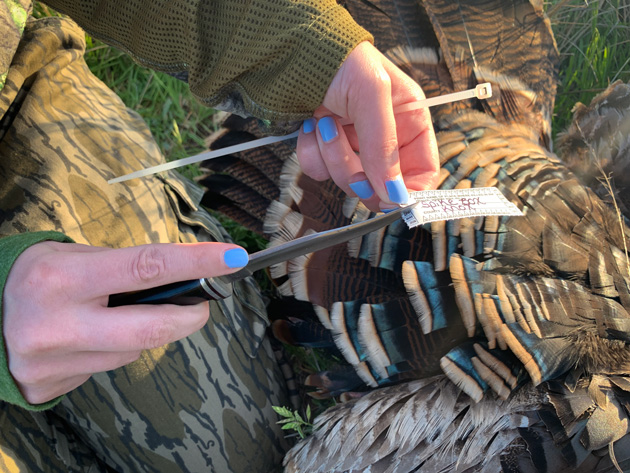 I don’t know that the hard-earned bird tastes any better than if I had taken a gobbler on my first hunt. It does seem to have scored additional street-cred with my fellow hunters, but I’m not sure that the satisfaction was any sweeter. I think I would’ve felt just as excited and humbled if the timeline had been shorter, but I certainly would’ve missed some beautiful sunrises. I’m incredibly grateful for the shape the journey to my first bird has taken. I’ve experienced many brisk spring South Carolina mornings, traipsed across the expansive Land Between the Lakes in Kentucky and been poked by too many prickly pear in Texas. I’ve witnessed a variety of wild turkey behavior and encountered countless other wildlife. Most importantly, I haven’t met a single turkey hunter that hasn’t become a friend. Folks have given up time, gear, well-kept secrets, and even birds in the name of my pursuit. I’ve taken to calling these folks my turkey hunting coaches, and it certainly took a lot of coaching to get my first gobbler on the ground. At the end of it all, having a freezer full of turkey to share with my friends and family and a mind full of memories is a blessing. But, the greatest takeaway for me is the strength of the hunting community that supported me in learning to do something I never considered myself capable of doing. 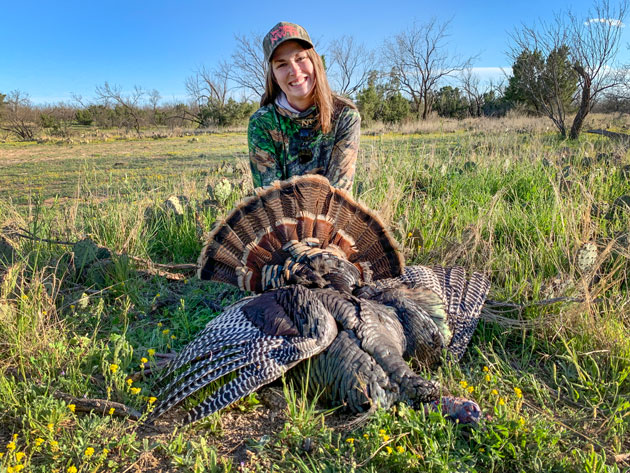