So, what does a wild turkey do during the day?

It's been said that if you can locate a food source then you can locate birds. Wild turkeys are opportunistic foragers. They spend a good portion of their day scratching in leaf litter, chasing bugs and milling for seeds. See their food habits outlined below.

Poults: In the first few weeks and during their first summer, broods spend nearly 90 percent of their waking hours feeding. Poults grow at rapid rates and require a steady intake of nutritious food, mainly consisting of small insects (beetles, grasshoppers, leafhoppers) which are generally better sources of protein and energy than plant materials. As poults grow, they use more habitat types and food sources.
Juveniles and adults: Both animal and plant matter are consumed by older turkeys. Frequent food sources include soft mass (such as fruits, including blackberries, cherries, huckleberries and grapes), hard mass (such as acorns, beachnuts and hickory nuts), as well as grasses, sedges, wheat and chufa. Animal foods consist of larvae, grasshoppers and beetles.

Wild turkeys generally move a mile or two in one day depending on habitat and distance to food and water sources. The annual home range of wild turkeys varies from 370 to 1,360 acres and contains a mixture of trees and grass cover. Deep snow in the north and dry conditions in the west limit access to food and water and also set limits to the wild turkey's distribution across the United States.

Just like humans, turkeys talk to communicate. Their vocabulary consists of 28 distinct calls. Each sound has a general meaning and can be used for different situations. Male turkeys are notorious for their iconic gobble, which unlike other calls, is given with a fixed intensity. Listen to all the sounds made by the wild turkey on our Wild Turkey Sounds page.

Roosting in trees in an important element in the life of a wild turkey. It is a life-saving technique because roosting in trees helps birds avoid ground predators. Poults begin roosting from about 14-28 days old, depending on the sub-species, location and temperature. Turkeys may use traditional roost sites night after night but they generally use different sites and move from tree to tree. Turkeys usually select the largest trees available and roost as high in them as they can comfortably perch. In fair weather, hardwood trees are favored, while hemlocks offer good protection from harsh elements.

They Fight for Dominance & Mate

During the fall and winter seasons, it's common for turkeys to be in the good company of their equals. You'll see groups of jakes, old and young hens and mature gobblers all sectioned out. The different flocks allow the birds to more easily determine dominance. In the spring, mating rituals begin. Learn more about the pecking order and breeding cycles on our Wild Turkey Lifestyle and Breeding page.

They Dust, Sun and Preen

Wild turkeys dust, sun and preen from a young age, about 2-4 days old. Dusting is usually a flock activity. A dust bath is part of a bird's preening and plumage maintenance that keeps feathers in top condition. Turkeys will flap frantically in the dirt to spread dust over their entire body. Doing so keeps feathers from becoming greasy or matted. Sunning and preening often follow a dust bath as part of their extensive grooming regimen. Sunning birds recline on one side and extend the upward wing and leg to expose a large surface area to direct sunlight. Birds sun for several reasons: to obtain heat as a way of regulating their body temperature, maintain feather health, dislodge feather parasites and for relaxation. Preening is a common bird behavior to keep feathers in good shape. Birds preen to remove dust, dirt and parasites from their feathers. They also align each feather in the optimum position relative to adjacent feathers and body shape. 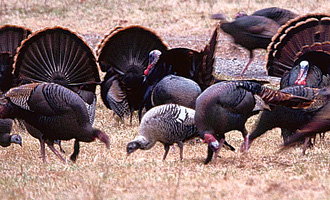 An average adult turkey diet is made up of 85 percent vegetable matter and 15 percent animal matter.

The internal motivation of individual gobblers varies from day to day during breeding season.

Turkeys have eight different shaped feathers that all help with: body covering, insulation, waterproofing, flight, protection and display and recognition.