The adult hen assembly call is a series of loud yelps, usually a little more emphatic and longer than a standard series of yelps. The assembly yelp is used by a hen to assemble her flock or young poults. It is a good call in the fall when trying to call a scattered flock back together.

The cluck consists of one or more short, staccato notes. The plain cluck often includes two or three single note clucks. It's generally used by one bird to get the attention of another and a good call to reassure an approaching gobbler that a hen is waiting for him. This is a great call while trying to encourage gobbler to come into range if he starts to hang up. It can also be used while birds are still on the roost to subtly let a gobbler know you are there.

The cluck and purr is a cluck followed by a rolling, almost staccato call. It is often associated with flock talk or the feeling of contentment. Typically not a loud call, though sometimes it can be amplified, it is good for reassuring turkeys as they get close to your position.

Loud, sharp clucks that are often mixed with yelping. Cutting is a sign that turkeys are excited, not alarmed. Cutting has several uses in hunting. If a gobbler is henned up, and one of the hens is cutting, you can cutt back in an attempt to bring her to you. You will want to mimic her calls, while cutting off her vocalizations and being a bit more excited. The goal with this tactic is to lure a dominate hen to you for a fight, often times bringing the gobbler with her. You can also cutt when you have tried soft calling to a gobbler that is hung up.

Similar sounds and notes as a plain yelp but much more excited, rapid and with more volume. This is not a sign of alarm, but indicates that a turkey is worked up about something. If a gobbler is henned up, you might be able to bring him to you by picking a fight with the dominate hen in the flock. Yelp at her excitedly, cut off her vocalizations with your own calls and you might lure the hen, and the gobbler with her, to you. You can also use an excited yelp when you have tried soft calling to a gobbler that is hung up.

Fly Down or Fly-up Cackle

A cackle usually consists of three to 10 irregularly spaced notes, loud and staccato, increasing in pitch as the call nears its end. The cackle is generally associated with leaving the roost, but can also be heard when a bird is flying up to a roost. A fly-down cackle is good call to tell a gobbler that a hen is on the ground. However, a fly-down cackle often works best if the gobbler is already on the ground before you call. Otherwise, the tom may stay on the roost; waiting for what he thinks is a hen turkey to come to him before he flies down. A fly-up cackle can also be a good tool when trying to locate roosted toms, as it may get a roosted tom to gobble.

The gobble is a loud, rapid gurgling sound made by male turkeys. The gobble is one of the principal vocalizations of the male wild turkey and is used primarily in the spring to let hens know he is in the area. Hunters must be cautious using a gobble, especially on public land where it may attract fellow hunters to your position. It can also be a double-edged sword. A gobble may draw a dominate tom to you looking for a fight or you might drive away less dominant birds who want to avoid a beating. It is often used as a call of last resort. However, it can also be used effectively late in the evening when trying to get a tom to gobble on the roost.

The kee kee is usually a three-note call that lasts about two seconds. A variation of the call, the kee kee run, is merely a kee kee followed by a yelp. The kee kee is the call of lost young turkeys and variations are also made by adult birds. It's often associated with fall hunting and is used to reassemble a scattered flock. It can be used in the spring to make you sound more natural - especially on public land where it may set you apart from all the other hunters using yelps and cutts.

The plain yelp of a hen is a basic turkey sound and is often delivered in a series of single note vocalizations. The plain yelp can have different meanings depending on how the hen uses it, but it is basic turkey communication. It is also commonly used by a hen to communicate with a gobbler during mating season. This is a basic turkey hunting call. If you can yelp, you have a chance of being able to call in a turkey.

Purring is a soft, rolling call turkeys make when content. It is a low vocal communication designed to keep the turkeys in touch and often is made by feeding birds. This is not a loud call, but is good for reassuring turkeys as they get close to your position.

The putt is a single or several sharp notes. The putt is generally associated as an alarm and usually means the bird has seen or heard something and is signaling danger. This can be useful when you have a gobbler in range, but can't get him to raise his head or stop. However, before putting at a gobbler it is best to have your shotgun ready and on target. Once you raise the alarm by putting, you will have little time to shoot and the bird will take off at the slightest movement.

The tree call is a series of soft muffled yelps given by a roosted bird that sometimes picks up in volume as fly down time nears. Maybe accompanied by soft clucking. It is generally acknowledged as a call to communicate with others in a flock. It can be used to let a gobbler on the roost know you are there.

Other Sounds from the Turkey Woods

The crow call is made up of several harsh notes that sound like "caw." This call is a good locator call to get a tom to shock gobble any time other than sunrise and sunset. Keep your crow call short, as a long crow call might drown out the sound of a turkey gobbling.

The eight-note hoot of the barred owl is often described as having the cadence of "who cooks for you, who cooks for you-all." The owl hoot is used to locate a tom in the early morning or late evening hours by drawing a shock gobble. The benefit of the owl hoot is that it gets the bird to gobble without using turkey sounds, which might cause the gobbler to look for you before you are ready. You should begin owl hoots about 30 minutes before sunrise, or right when cardinals begin to sing, and stop when the crows begin to call.

Turkey Calling Tips from the Pros

Watch one, two or all of the videos in our turkey calling tips playlist. Experts will walk you through how-to call, where to call and when to call. Improve your skills and remember, practice makes perfect! 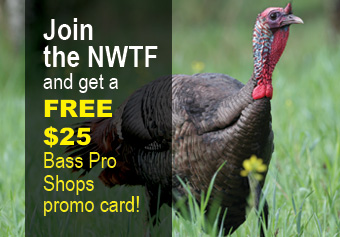